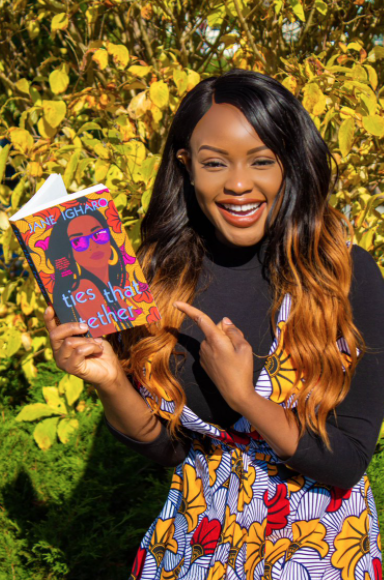 In her fiercely honest and exceptionally witty own voices rom-com, Jane Igharo not only brings readers a gorgeously heartfelt story of love, identity, and finding your voice, but she captures the unique experience of straddling two cultures in a close-knit immigrant family.

So many rom-coms have dealt with the choice between love and identity, but Igharo brings a much-needed new voice to the mix, inspired by her own experiences as a Nigerian woman who immigrated to Canada in her youth. In Ties That Tehther, a once strictly obedient daughter breaks her late father’s cardinal rule to gain her own freedom and a chance at true love.

Ties That Tether tells the story of Azere Izoduwa. She has always known she would marry an Edo man, ever since she promised her dying father she would preserve their Nigerian culture even after moving to Canada. Marrying within her culture would preserve her identity — or that’s what her parents told her — and her mother has been keeping her on track ever since. Now 25 years old and having gone on more than one disastrous date with Edo men her mother forced her to meet, she’s tired. It’s on a night like this that she meets Rafael Castellano, a charming stranger who is tall, handsome…and white. After a few drinks and pleasant conversation, Azere ends up in his hotel room. And even though she feels drawn to him, her duty as a daughter makes her disappear in the morning.

A month later, Azere has almost forgotten her one-night stand when Rafael walks into the staff meeting at her advertising agency. It turns out he’s a new consultant at the firm, and they’ll be working together. And though she tries to deny their connection, Azere can’t help but want to be in his arms again. Suddenly, Azere finds herself questioning the plans and expectations of her culture that she once accepted. With Rafael, she feels like her life can be completely her own. But when her decision threatens to distance her from her family and her identity as a Nigerian, and she finds Rafael keeping secrets from her, she must decide if she will risk everything for a chance at love. The answer will either cause Azere to fight for her happiness or return to being the compliant daughter.

Author Jane Abieyuwa Igharo was born in Nigeria and immigrated to Canada at the age of twelve. She has a journalism degree from the University of Toronto and works as a communications specialist in Ontario, Canada. When she isn’t writing, she’s watching Homecoming for the hundredth time and trying to match Beyoncé’s vocals to no avail.

Ties That Tether is currently available wherever books are sold.