A poster commemorating Ava DuVernay’s documentary 13th was vandalized outside Netflix Headquarters in Los Angeles, Ca. Thursday, Variety reports. The poster hailed 13th’s eight Emmy nominations and its various awards, including a BAFTA award for Best Documentary and a Peabody Award for the same. It depicted a black man holding a sign reading “Am I Next?” and with his other hand raised in a fist. The vandal tore away the part of the poster showing the man’s face and body, but his hand raised in a fist was still visible. 13th examines the mass incarceration of black Americans and draws connections between Reconstruction era policies and the current epidemic of police brutality which gave rise to the Black Lives Matter movement. The documentary is named after the Thirteenth Amendment, which abolishes slavery except in cases where the person has been convicted of a crime.

Ava DuVernay herself is famous not only for 13th but for Selma, a historical drama about Martin Luther King Jr.’s 1965 voting rights marches, and the OWN drama series Queen Sugar, which examines police brutality, the aftermath of Hurricane Katrina, and racism in the sugar farming industry, among other themes. DuVernay’s next project is an adaptation of Madeline L’Engle’s famous children’s novel A Wrinkle In Time to be released in 2018, featuring a cast much more racially diverse than the 2003 made-for-TV adaptation. It should come as no surprise that DuVernay has become well-regarded in activist circles. 13th has even become required viewing in some classrooms, becoming a part of lessons in psychology at Wayland High School of Wayland, Ma., and in social work at Rutgers University. 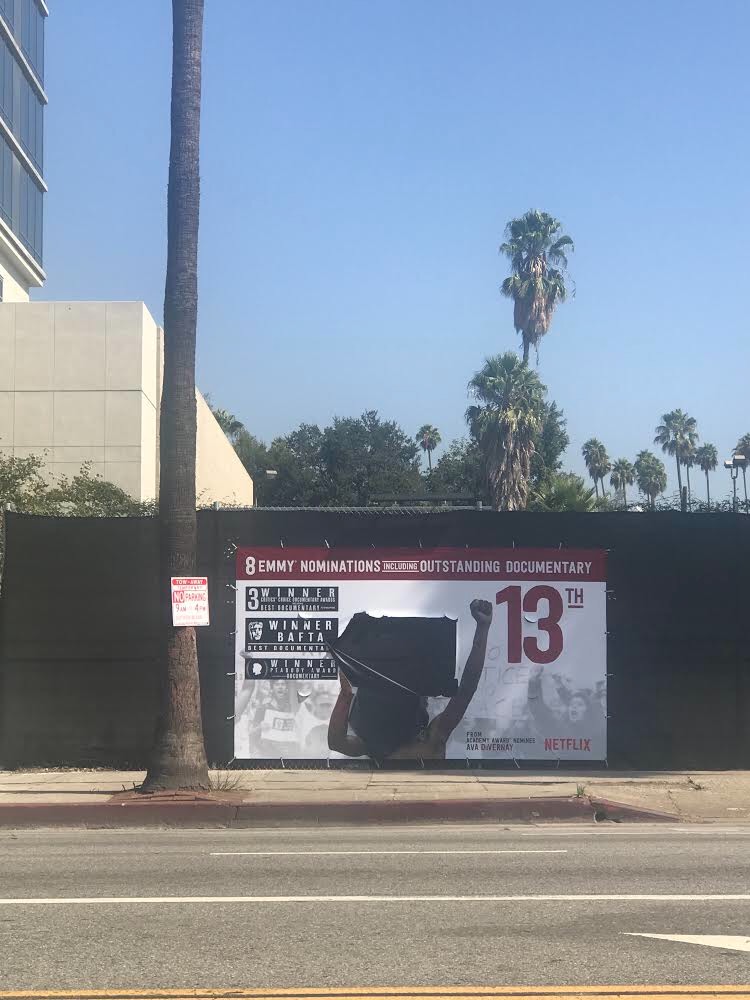 Barely a week before the vandalism, a so-called “Unite the Right” rally in Charlottesville, Va. saw white nationalists, Neo-Nazis, and Klansmen come together to bombard the liberal enclave with hate speech and violence. Young paralegal Heather Heyer was killed when a “Unite the Right” rioter drove his car into a crowd of counter-protesters, wounding 19 more people. In light of this tragedy, the message of the vandal seems clear, at least to Netflix public relations professional Myles Worthington, who told the Huffington Post: “When the face of the black man was slashed and a gaping hole was left in its place, I felt like someone just punched me in the stomach, especially given the current events in Charlottesville.”

After finding out about the vandalism, Ava DuVernay tweeted: “Sorry, cowards. Too late. Can tear the paper. Can’t tear what this film has shared and shown. Just like this poster, the fist stays raised.”

DuVernay responded to the restored poster with one word: “Onward.”