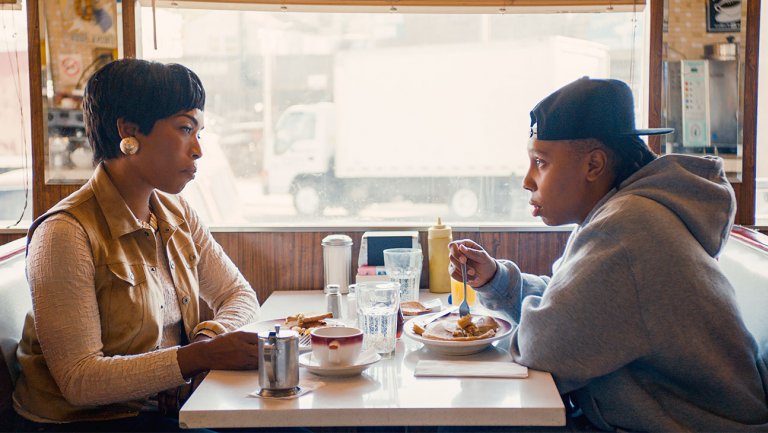 When Master of None premiered two years ago, it instantly became a new favorite among viewers for its clever storytelling and diverse cast that centered around an Asian-American man, Dev (Aziz Ansari).

But while Ansari and his co-creator, Alan Yang were pushing the diversity needle forward for Asian-Americans, viewers often noted that there was a lack of women of color in Dev’s dating pool. For all of season one’s ten episodes, Dev dates nearly all white women.

Ansari responded to this critique in a Reddit AMA shortly afterward by stating that there were no “ethnicity requirements” in the casting calls and that they only asked that there be chemistry between himself and the actress. And while that may be true, as a showrunner of color, there’s, unfortunately, an added responsibility to provide an opportunity to bring on other actors of color who often have more difficulty getting casted than their white counterparts. (To be fair, he does give a lot of space to Lena Waithe’s character, Denise, but season two pushes it even further.)

Luckily, in his latest offering of the Emmy Award-winning series, Ansari and Yang not only rectify this but they also highlighted a group who are especially marginalized — black women.

Black women are rarely seen as love interests in major films or TV series. In Master of None, we not only get to see one black woman as a love interest but eight.

The season kicks off with Dev meeting Sara (Clare-Hope Ashitey), a British black woman. The premiere episode, “The Thief,” is dedicated to their chance meeting in Italy at an exclusive restaurant and follows the two charmingly work off of each other’s chemistry as they ride bikes and joke about whether it would be more romantic to kiss now or later. Unfortunately, Sara never gets the former or the latter as Dev’s phone is stolen and thus, her phone number, lost.

While it seems like there may be a chance for their reunion when Dev gets an unannounced visitor in episode two’s “Le Nozze,” it turns out to be Dev’s friend, Arnold, who’s in town to go to his ex’s wedding, with Ellen (Ciara Renée). While Arnold is pining over his ex, Dev ends his flirty texts with Rachel, which gears us up to watch the complexities of dating further unravel in episode four, “First Date.”

In this episode, Dev goes on a date with several different women after being matched up with them on the Tinder-like app, Love@FirstSight. This episode ends up shedding light on the “really gross, disgusting” messages that women receive from random men including pictures of nether regions, “fetish-y Indian stuff”, “fetish-y Latina stuff,” “fetish-y Filipino girl stuff” and not-so-sweet handwritten letters. This back-to-back relaying of their harassment ends with Diana, played by Condola Rashad, who explains how it’s different for her.

“Oh, being a black woman on these apps? Completely different situation,” she says. “I mean, compared to my white friends, I get way less activity. I also find that I rarely match with guys outside of my race,”

Ansari picks it up: “Same for me. A lot of my matches are Indian women. I did read somewhere that the people that do worst on the apps are Asian men and black women.” This is true. According to the dating site, OkayCupid, “82% of non-black men on OkCupid show some bias against black women” and “Asian men get the fewest messages and the worst ratings of any group of guys.”

Although the characters in “New York, I Love You,” may have some more luck with their sex life including Maya (Treshelle Edmond), a deaf black woman who gets a large amount of screen time in the episode that sheds light on what it’s like to be without hearing during its silent scenes. But the highlight of this episode comes when Maya confesses to her husband that she needs more cunnilingus in her life. Not only was this a great moment for black women but also for people with hearing disabilities and for open, honest and healthy dialogues about sex. Each on its own is rarely seen on TV, but to have all three at once is a unicorn levels of rarity.

In “Door #3,” Dev’s friend, Brian (Kelvin Yu), gets a storyline with his dad, Peter (Clem Cheung), who is dating two women at the same time. One of the women is an affectionate nurse, Ellen (Catrina Ganey), who for a brief time was willing to share him with another woman. Although Peter was only interested in Ellen because of her awesome dog, Coco, it allowed the audience to see an older black woman get some love. In fact, Ellen’s race never comes up. The only time we learn that Ellen is black is the first time we see her on screen. (Peter’s other lover, Linda (Felice Choi), who is introduced first, is a Korean woman.)

On top of showing black women as love interests, Master of None also enables them to tell stories about issues including sexual harassment, negative tropes on black women in media and real life and the struggle of coming out to your parents.

During “First Date,” Diana also makes a remark about her latest gig where she played the “bad example of the woman who puts on the child’s mask before her own” in a airline safety video — an all too real reoccurrence for black actresses in ads like Dove’s 2013 spot where a black woman is featured next to the “before” side and a white actress is shown in the “after” side or Baby K’tan’s ad that depicts a single black mother versus a white mother who has a father in her picture — literally.

Diana ends up rejecting Dev’s advances (despite a fun car dance off to Scatman John’s “Scatman (Ski Ba Bop Ba Dop Bop)”), but he does end up hooking up with Christine (Lauren Miller), who is not a black woman but their encounter is worth a note. After Rashad spoke about being cast as a “bad example,” we see another negative depiction of black women on top of Christine’s night stand — a jar in the shape of a Mammy, a racist depiction of the black women who worked as caretakers for white families. It serves as her condom jar. While this gives Dev a pause, he still hooks up with Christine. But afterward, he makes sure to point out that the jar is racist to her shock and dismay. Needless to say, this was their last hook-up of the season.

Another main star in this season is Lisa (Ilfenesh Hadera), a make-up artist who works on the Dev-hosted show, Clash of the Cupcakes. While Lisa only gets a few scenes here and there, her story turns out to be one of the focus points of the season when it’s revealed that she’s been continuously sexually harassed by Dev’s producer, Chef Jeff. The reveal comes on a faux talk show hosted by — you guessed it — another black woman, Raven-Symoné. (It’d be a disservice not to mention Dev’s agent, Shannon (Danielle Brooks) who makes a hilarious reappearance in this season’s “Buona Notte” and “Le Nozze” as well.)

But the crème-de-la-crème for black women in Master of None is in “Thanksgiving,” an episode dedicated to Denise (Lena Waithe). This episode (which is directed by another black woman Melina Matsoukas), follows Denise and Dev over their 22-year friendship on the national day of food. In it, the two are surrounded by black women including Denise’s grandmother, Ernestine (Venida Evans), her mother, Catherine (Angela Bassett!) and aunt, Joyce (Kym Whitley) as Denise goes on a journey of learning to be herself, growing to be comfortable defining herself as a lesbian and coming out to her family.

Through this time, she dates two black women — the selfie queen, Nikki (Erica Mena), who loves chocolate milk, skateboarding dogs and her Instagram username, NipplesAndToes23 and the well-rounded and generous Michelle (Ebony Obsidian).

Through this episode, not only do we get a unique unfolding of a black woman coming out to her family, but a portrayal of black women in different generations in a household full of love, laughter and political banter that breaks stereotypes of the “angry black women.” And when Denise does decide to tell her mom that she’s a lesbian, her reaction defines the experience of every black woman in this series.

“I don’t want life to be hard for you,” says Catherine while fighting tears. “It’s hard enough being a black woman in this world, now you want to add something to it?”

This episode works best as black women are placed at the centerpiece and Ansari steps to the side to shine a light on them and the story that’s loosely based on Waithe’s own life of growing up around black women.

While many fall short in showing up for black women, Ansari and Yang stepped it up in this season by not only highlighting them but showing them as the multifaceted beings that we are. And they deserve some credit for that.

Hopefully, they take this even further in the next season and hire a woman of color to be the love interest.