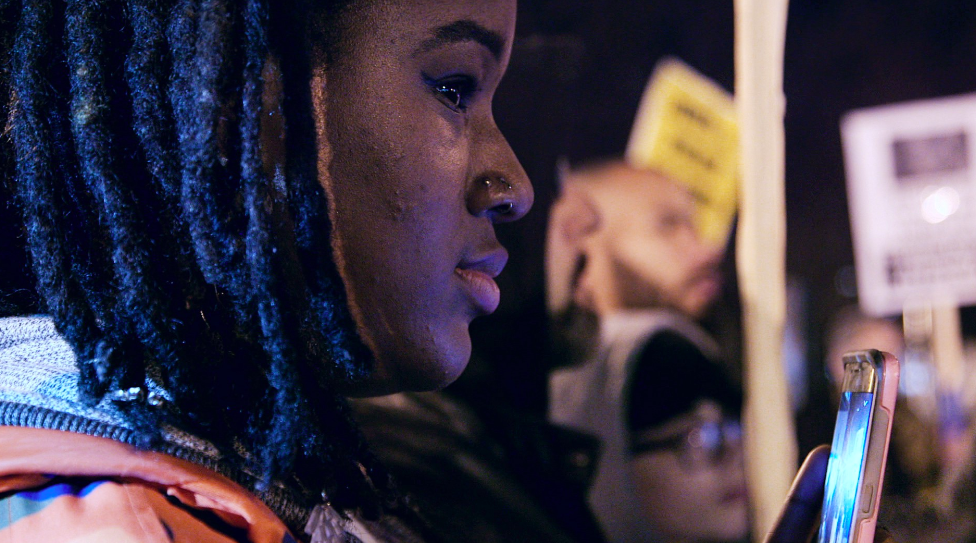 The death of Freddie Gray shook this nation to its core. It wasn’t just the Baltimore city residents who were deeply wounded by this tragedy, but also everyone who read, watched and learned more about the story of how someone could be fatally injured during a simple police arrest during a protest. Everyone was on edge in 2015 when this story was first reported, and the city of Baltimore fell under a microscope as news media outlets across the nation scrutinized this story, covering the deep divisions between law enforcement and the citizens of this community.

Directed by Sonja Sohn, who you know best as Kima Greggs on HBO’s The Wire, Baltimore Rising shines a spotlight on the aftermath of Freddie Gray’s death, examining the dichotomy between the peaceful protests and destructive riots within the city. Sohn does an excellent job of first establishing the groundswell of why these protests and riots occurred. In a city that feels abandoned by leadership, where citizens are often terrorized by law enforcement, the criminal negligence of the Baltimore police department in Freddie Gray’s homicide became the straw that broke the camel’s back. The film profiles various protesters in interviews and documents their activism as they try to gain a sense of understanding of what happened to their city, attempting to reclaim it from the police state that it has become.

Take, for example, community leader and former gang member Genard “Shadow” Barr. He’s a recovery addiction specialist at the Penn-North Recovery Center where he performs most of his community outreach. There is one especially poignant moment where he’s in tears and shares how important it is for him to prevent his kids from going through what he is going through during this aftermath. He has this discussion with Commissioner Kevin Davis, who took over the Baltimore Police Department in 2015 after the firing of Anthony Batts by the mayor.

The film’s approach sympathizes with Davis as the new guy who’s just trying to do the right thing. There are moments when he’s seated with Barr and other Black men in the community sharing their stories of being racially profiled and harassed, and the camera leans in and pushes so close that so we can see his expressions of concern and thoughtfulness. There’s another moment where Barr initiates a flag football game between members of the community and the police department. This game is supposed to represent a symbol of solidarity, if only for a short while. We cut back to reality when we see more police brutality and the announcement that the officers involved in the Freddie Gray manslaughter case will not be indicted.

Then there is Makayla Gilliam-Price, who I absolutely adore. This young trailblazer founded the youth justice organization City Bloc as a high school student. She also organizes with the grassroots think-tank Leaders of a Beautiful Struggle. There are moments with her mom where you can track how, from one generation to the next, each approaches activism in their own way. While her mom supports her activism, she’s also more concerned for Makayla’s safety.

The film resonates, teaches, provokes and speaks to the viewer in a way that allows you to get a deeper sense of who the people of Baltimore are and why their actions are so important. Each person has a story, from the guy on the corner, the student activist, to the police officer patrolling the streets. This film shows how rising against the injustice of state-sanctioned violence on citizens—many who are terrorized and assaulted by the men and women sworn to protect them—is the only way their cries for help can be heard.