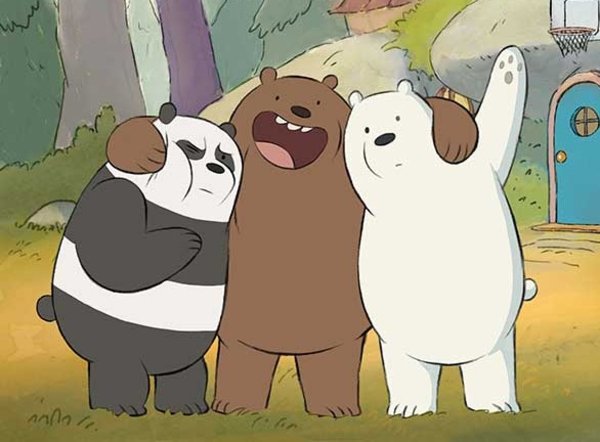 We Bare Bears on the Cartoon Network opens with its theme song, “We’ll Be There” by singer Estelle of Steven Universe fame. For the show’s protagonists – Grizzly Bear, Panda Bear, and Ice Bear – being there for each other is necessary to live in a human world. Like Adventure Time and Steven Universe, We Bare Bears examines identity and friendship. Yet, what I find refreshing about the show is how it explores immigrant and third-culture kid stories.

I do not live in San Francisco. However, when I watch We Bare Bears, I feel like a San Franciscan. Much credit is due to the animation team and the show’s creator, David Chong, who weave in elements endemic to San Francisco. Viewers see diverse people speaking different languages in Chinatown. They hear Bay influenced music in the background, and admire the Redwoods around the Bears’ hobbit hole. Such distinct artistic choices allow the setting to become a character itself. Though the city is visually charming, its residents are not as charming to the Bears.

As the Bears learn and make mistakes in the city, human reactions range from disgust, awe to fear. Whenever the Bears walk on the street, strangers stare or speed walk away from them. Locals cower when the Bears initiate conversations. In Season 1, Episode 1 of We Bare Bears, the Bears are accused of stealing. When the cops surround them, the whole community judges them as guilty until the cops find the perpetrators: a pigeon gang. In the next episode, the friendly Grizzly Bear approaches picnickers and even his bubbly demeanor frightens them.

Humans experience a visceral fear when they meet the Bears. Often, people reserve a similar fear for immigrants out of ignorance. Sometimes, newcomers are condemned for their religion or festishized. In other cases, immigrant communities are called upon to be cultural representatives. A similar situation happened to the Bears when they met Chloe Park, a ten-year-old Korean-American child prodigy in Season 1, Episode 4. Chloe presents an ethnography on the Bears to her class. During the presentation, she discovers the Bears changed her report to show them in a more favorable light. Disguised as college students, the Bears watch Chloe struggle to present. Regretting their decision, the Bears help Chloe with her presentation and share their experiences with the class. In the final scene, the Bears answer students’ questions about Bear stereotypes and eating habits. This last moment is powerful because We Bare Bears depicts the kinds of questions newcomers face, and how to deal with being representatives or not.

As We Bare Bears progresses, the Bears try to assimilate as a means for survival. In Season 2, Episode 35, the Bears cannot enter a Boba shop without clothes. They buy clothes to get Boba, but discover that their respective clothing create personas for them. Grizzly, who wears a suit, transforms into a corporate executive. Ice Bear, who wears an all-white outfit, becomes a fashion model. Panda Bear, who wears a fitted blazer with a scarf, finds a girlfriend. They seem to gain overnight success.  For Panda, “success” is finally having a girlfriend. For Grizzly, success is positive reaffirmation. For Ice Bear, success is fashion recognition.  Ultimately, their outfits cannot hide their Bearness to humans. Realizing this, the Bears remove their clothing with dramatic flare. This episode is poignant because it highlights the limits of assimilation. Even “model” immigrants who integrate cannot avoid deportation. Such examples are reminders that assimilation and respectability can only get people so far.

We Bare Bears is not forceful with its messaging. Yet, its subtlety does not give the Bears adequate self-reflection on how humans perceive them. In the Season 3 premiere, the Bears confront respectability and misrepresentation. Grizzly plays a Bear in a movie, but later realizes the director typecast him as a murderous one. Grizzly tells the director that the role is a “poor representation of his species.” Through Grizzly’s statement, We Bare Bears addresses how destructive rhetoric harms marginalized folks. It was one of the show’s louder moments. Yet, given Hollywood’s whitewashing and lack of inclusion, the episode’s tonal shift felt imperative especially for third-culture kids who do not see themselves on screen.

Luckily, friendships with Charlie, a Bigfoot creature, and Ranger Tabes, a National Park Ranger, give the Bears an inclusive space to be themselves. Their relationship with Chloe is especially important. They all confide about feeling split between worlds. Chloe struggles to balance being a child, a prodigy and a Korean-American. Many kids feel tugged between fitting into one’s adopted country and maintaining familial culture. We Bare Bears quietly captures how these multiple consciousnesses intersect in Korean-American life. Seeing the Parks speak Korean and eating Korean cuisine family style are touches that give them dimensionality, rarely found in American cartoons.

Growing up, I rarely saw first-generation kids life myself in cartoons. I imagined my animated Ghanaian family eating jollof rice on screen, and doodled characters during recess. Even in adulthood, I waited for a show that could capture this unique story. Now, We Bare Bears and similar shows, allow third-culture kids to be there for each other and see representation when the world says otherwise.

By: Christina Djossa: Christina Djossa is a Princeton in Asia Nepal Alum and Women in Literary Arts (VIDA) Coordinator. Her past work includes “Mom, Nepal, and I: Adventure Trekking for a View of Mount Everest” for On She Goes, a digital travel platform that help women of color travel more. In addition, she wrote “Investing in Women’s Education Pays Off” for the USAID 2030 Blog. She covers race, comics, science fiction, culture, podcasts, pop-culture, and travel on her blog unhcronicled.com. Twitter: @cdjossa