In the new Kickstarter campaign for the animated series Barry & Joe, creator and writer Adam Reid describes the story of President Barack Obama and Vice-President Joe Biden as a time travel story where the two are “bromancing the multiverse to save us from ourselves”.  The gorgeous artwork illustrated by Lance Laspina, features Barack, Joe and Neil Degrasse Tyson in animated form.  The genre of the series is an adult animated sci-fi sitcom, as well as a parody of Quantum Leap and countless other 80’s TV classics. 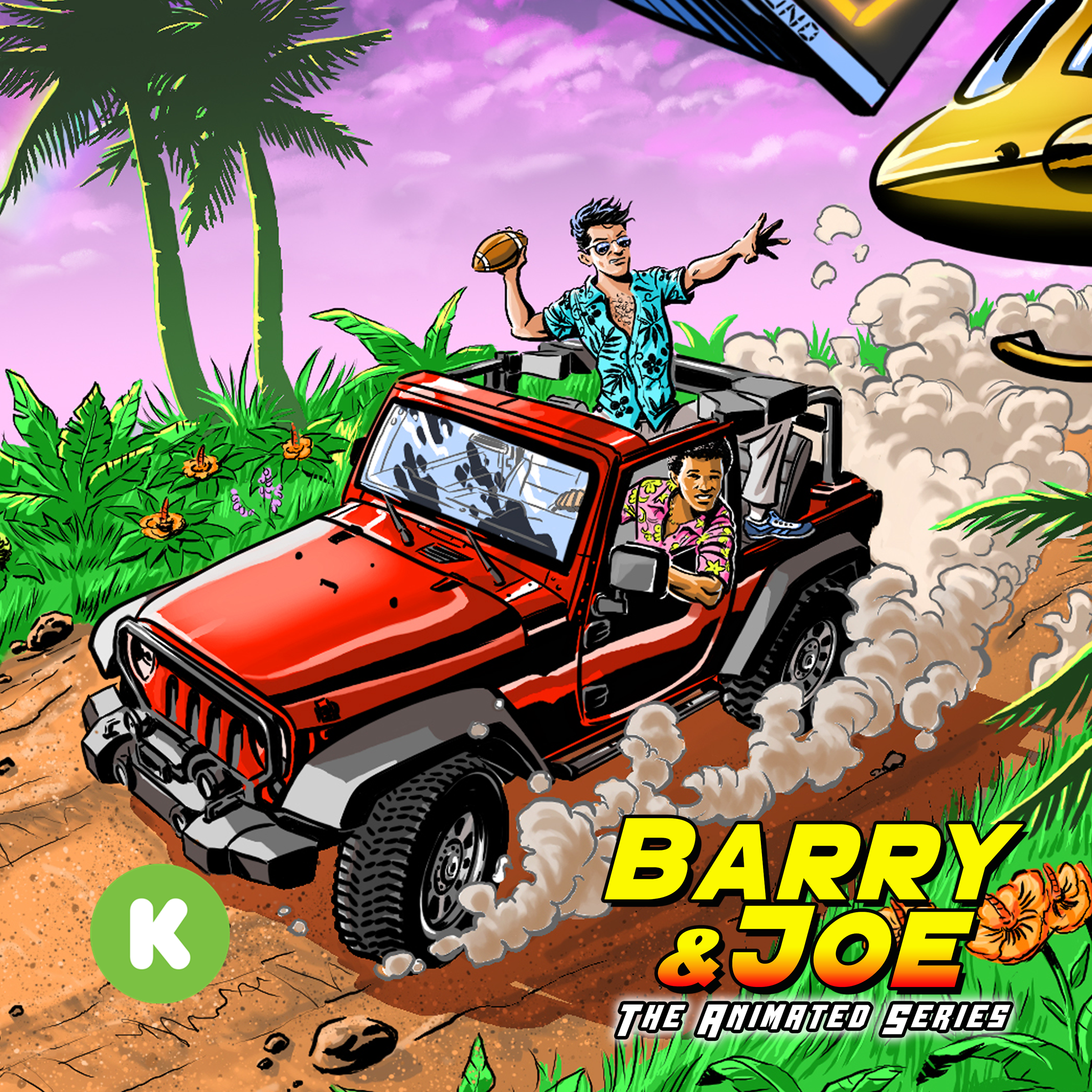 The Kickstarter campaign for Barry & Joe: The Animated Series has a goal of $100,000.00 and is currently a fourth of the way there.  This project comes at a time where most of us want to remember the days when we had real leadership in this country and an administration that stood for ALL Americans.  I discussed with Adam his thoughts about this story and some of the details surrounding why he wanted to do this now.

Jamie: Adam talk to us a little bit about this project. What’s the origin story behind this and why animation?

Adam: This idea came to me the morning after the election, on November 9th, 2016. Emotionally hung over and still reaching for some sense of up. It all just felt like a big mistake and I couldn’t wrap my head around what had happened. I thought to myself if only we could go back and set things right. This, of course, made me think of my favorite show as a kid, which was Quantum Leap. If you remember Quantum Leap, it was basically about a nice guy who was leaping through the past trying to make things better. The show was wildly naive about the world and the silliest kind of science fiction, but it was also fundamentally something we’re lacking right now, which is humanity. It had heart and it was about people and it was kind. Quantum leap had the added benefit of also teaching us about history in an immersive and clever way. Today, if we want to know what’s it’s like to be a soldier we can play Call of Duty. Back in the 80’s, if you were 10 years old like me, you watched Quantum leap.

Jumping forward about 30 years, daydreaming this idea for a show about continuing the Obama / Biden bromance by having Neil deGrasse Tyson send them back in time simply made me insanely happy. These guys are all genuine heroes to me. I let some time go by, almost six months before I did anything about it. I was holding myself back from developing this concept for real out of fear that it was too weird and f*cked up to be a thing. But then the reality of Trump happened, he was sworn into office and he says what he says and does what he does and we can all see that this an actual nightmare and not some overblown reaction. So finally after consuming all the dark matter this year, I broke. I need this. It’s therapy for me and it’s now or never.

Barry & Joe: The Animated Series was always a cartoon for adults in my mind. The swagger, tone, color, and style all lend themselves to a traditional Saturday Morning Cartoon approach that feels like an old friend. This is my way of combining the things I loved growing up (and still nerd out over) with the themes and issues I care about most a forty-year-old with two kids. 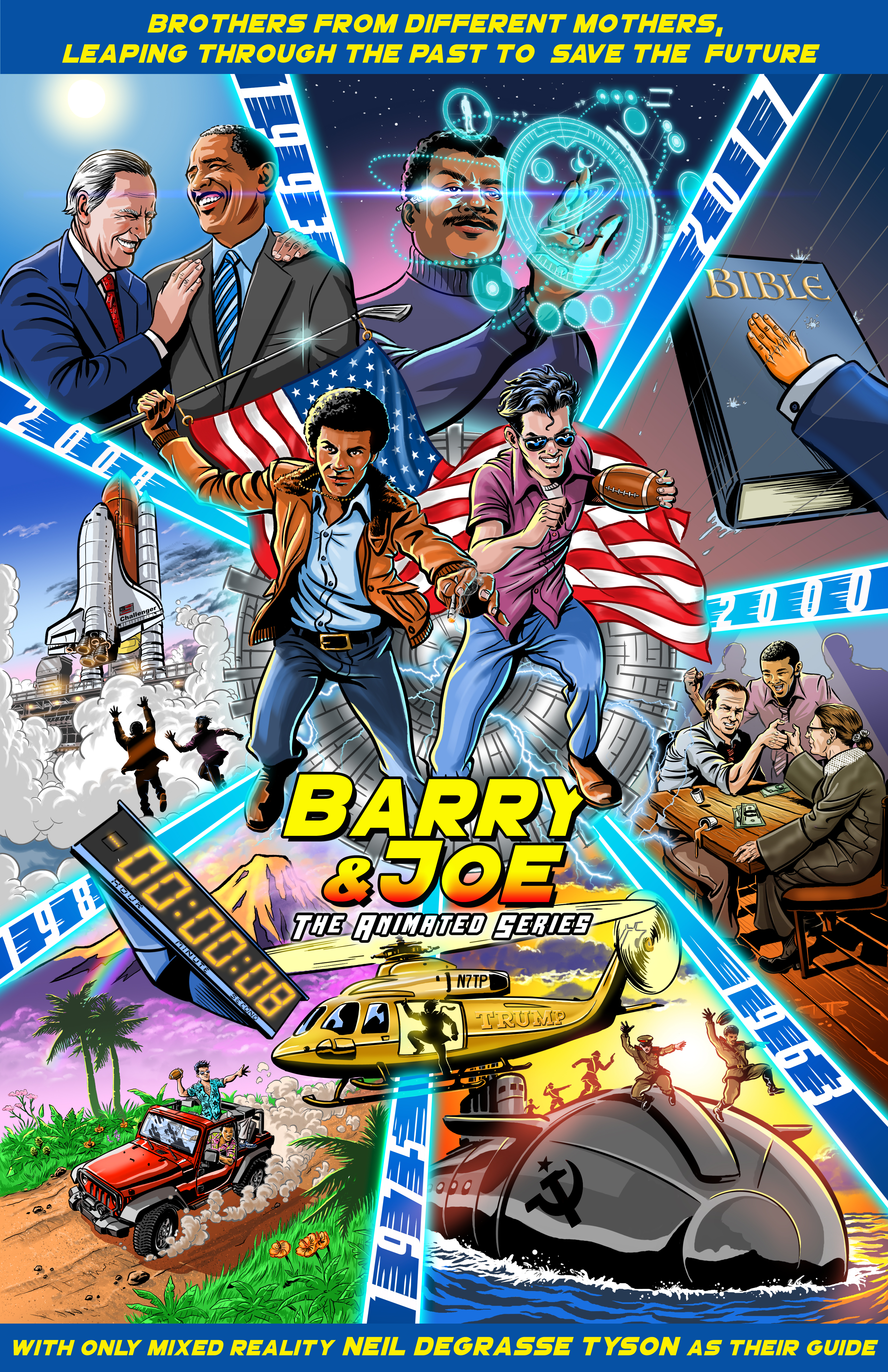 Jamie: I noticed on your Kickstarter page you have Neil Degrasse Tyson, Jordan Peele and Chris Pratt as voice actors. Have they committed to this project? Or is this who you have in mind once you reach funding?

NONE of these super talented people are associated with our production (yet!) But I figure while I’m writing a show about Barack Obama and Joe Biden time traveling, and while I’m asking for $100,000 from a world full of strangers… why not communicate really clearly. I know we’ll attract the RIGHT talent to this project who feel what we’re doing and want to be a part of it. I want Neil to play himself because he would bring honesty and knowledge to the show. His warmth and his ongoing mission to Make America Smart Again is as close to a spirit animal that this project has. I think if he read our script he would understand how a few minutes in the voice over booth to play himself in our science fiction adventure has the power to amplify his important messages in a unique new way.

Jamie: I imagine there will be some criticism (especially on the Right) about depicting Trump as a villain. What will you say to critics who feel this project is nothing more than partisan politics?

Adam: I know that an Obama & Biden Time traveling cartoon might make anyone on the right side of the political spectrum want to vomit. I can’t change that.

I also really believe that anyone who watches it will also see that we’re making fun of ourselves, the left, so much more than the right. And THAT’s something that we’ve forgotten how to do in the age of Trump. So while Trump is a common enemy in the series, he’s mostly invisible in the show, and he’s more of a kryptonite. Something we have to learn to deal with and understand so that we can keep going and heal and grow. We never see his face in the series, that’s a promise I’m going to keep. 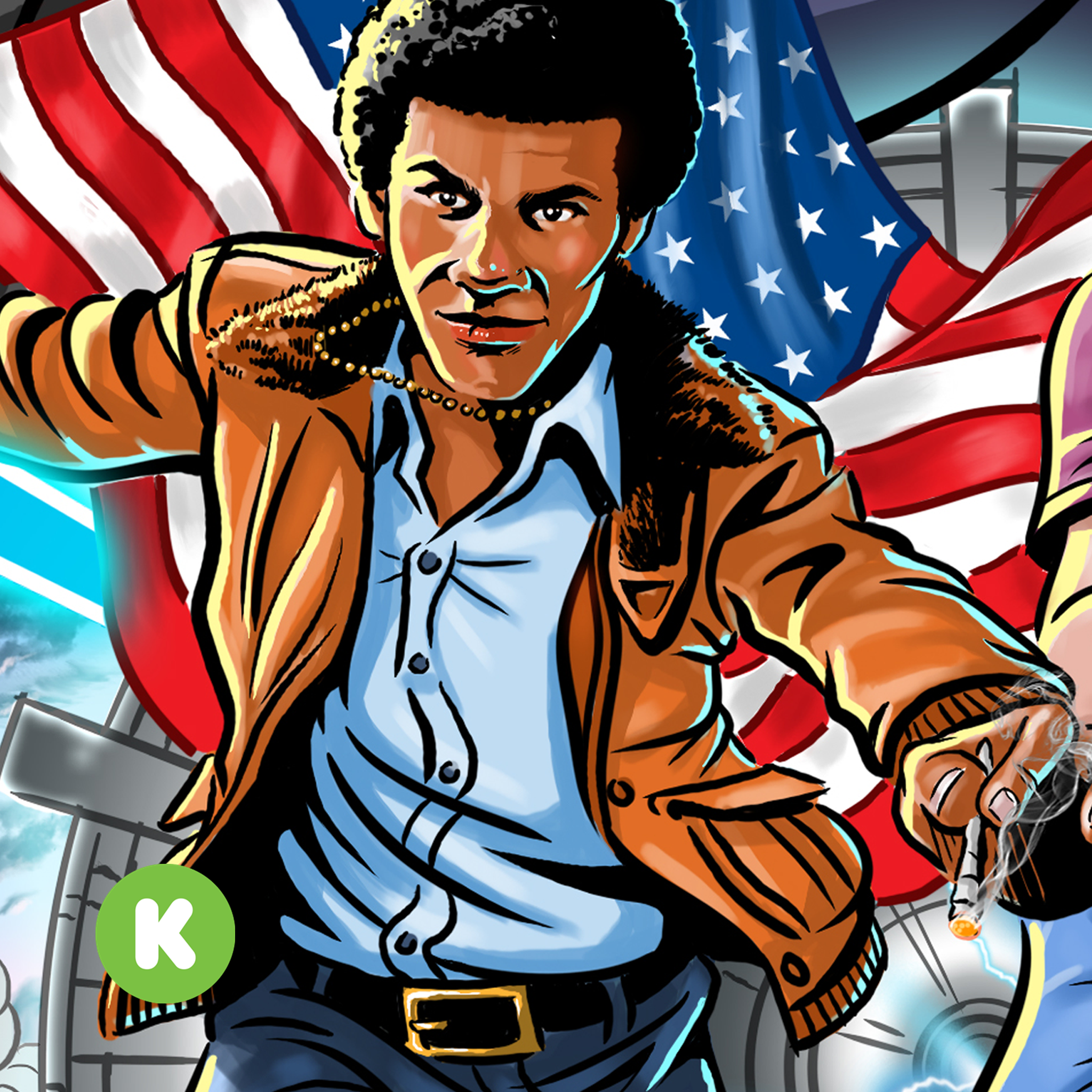 Jamie: This is a time-travel story, and for people of color these stories aren’t always and fun and as adventurous, as it is for white people. Do you plan to address issues like racism, immigration, and civil rights that so many marginalized people have had to fight for?

Adam: This is such an important question. Especially right now.

I’m white and I’m Jewish and I have no business pretending I understand what it’s like to be Black, or a woman, or any minority in America for that matter. I also don’t want to shy away from telling stories that deal with sensitive issues. So the only thing I can think to do is include as many people of color and other marginalized voices in our process at every level. To stay open and learn as we tell these stories together. I want to get it right, and while I’m only human, I think it’s worth trying.

We’re on full blast doing social media and of course, Trumpers are saying the craziest shit imaginable about our concept but I am actively seeking thoughtful feedback about our images and stories. If something doesn’t sit right with you and you’re my friend I want you to tell me so. Tell me how you feel. I want to win hearts and minds and that will require working together to make it as bad ass and empowering as it can be. I’m proud that the team I’ve collected so far is truly diverse and super passionate about what we’re doing. It only makes our message of brotherly love more powerful and it makes me feel like I’m on the right track.

Jamie: Will we see Michelle and Jill in this story? Or is just about the guys?

Adam: Yes! There are women! In fact, it’s my dream that our theme song is by the “Michelle” character, and I also have plans to feature characters of Jill Biden, Notorious RBG (Ruth Bader Ginsberg), Maxine Waters and hopefully much more in future episodes.

That said, this whole concept is admittedly dude centric (it’s a bromantic comedy!) History has a funny way of being made up by men, but I think we can also call attention to that and tell stories that swing the other way. Do you have ideas for characters or moments in history that were defined by women? Send me your ideas and I promise to dork out researching and learning about it.

Jamie: What do you hope viewers will take away from Barry & Joe’s story?

By using comedy, science fiction, and 80’s television tropes as a common language… we open up this opportunity to speak to people who are maybe not as interested in actual science and actual politics. It’s not about making up history or spreading misinformation, or calling people names and placing blame. It’s much more about “how did we get here?”

It’s also, really like any relationship story, about who these two guys are and how they come to love each other. How even though they have these wildly different backgrounds, and approach things differently, they share the same value system. Also, you know, great time travel stories. This whole interview makes me feel like the show is preachy or self-important, it’s not and that ’s a big part of it. I need this show to exist because it’s an escape and the nerdiest kind of epic fun. It just so happens to have this amazing backdrop of America and the fabric of our history and be about two guys I never tire of spending time with.

The Kickstarter page for Barry & Joe can be found here.