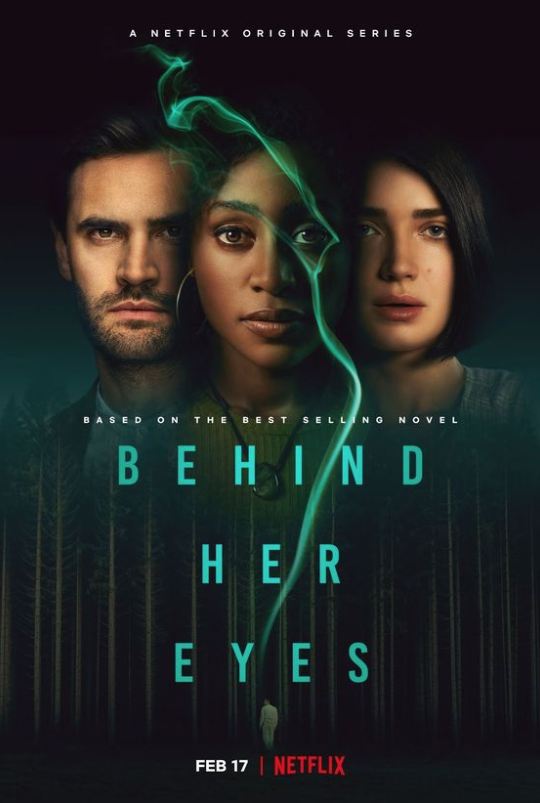 Netflix’s Behind Her Eyes is clever. The six-part limited series is based on the best-selling book of the same name by British writer Sarah Pinborough. Fellow Brit Stephen Lightfoot, a writer and executive producer on the TV show Hannibal, is the executive producer.

Behind Her Eyes is the tale of a lonely young British working class cis-straight single mom of one Louise Barnsley (played beautifully by Simona Browne) who meets David Ferguson (Tom Bateman), a tall sexy Scottish cis-straight man in a bar. They share a delicious kiss after an evening of unexpected soul connection. David turns out to be Louise’s new boss and is married to Adele (Eve Hewson) a young wealthy cis-straight woman. Louise and David vow to keep their relationship strictly business, but can’t resist their mutual attraction and end up having an affair and falling in love.

After Louise drops her son Adam (Tyler Howitt) off to school one morning, she literally bumps into and knocks over Adele on a random street corner. The women end up having tea and realize Louise is David’s secretary. Adele, new in town and lonely, initiates a friendship. Louise tries to resist Adele’s charm but accepts an invitation to Adele’s posh health club for a day of self-care. The women bond at Adele’s gym where Louise reveals that she suffers from insomnia due to terrible nightmares. Adele shares a handwritten journal with Louise that offers guidance in overcoming bad dreams by lucid dreaming exercises. As Louise reads and follows the practices in the journal, she’s finally able to get a peaceful night’s rest. Louise meets Adele weekly for gym/spa dates, and she’s having the best sex of her life with David. For the first time in a long time, Louise is happy.

The relationship triangle aspect of the series coexists with a murder mystery. In the space of six episodes, the audience is taken on a journey that includes mental institutions, heroin addiction, astral projection, and soul shifting.

In the book, Louise Barnsley was an insecure overweight dowdy white woman; in the limited series Louise is played by a 25-year-old, petite, beautiful dark skinned Black British female actor. Replacing the insecure white woman with a Black woman, hmmm—what’s the message there? David’s wifey Adele’s storyline is split between current day and flashbacks to her time living in a mental institution after being the sole survivor of a traumatic fire. Adele befriends a quirky cis-gay white man named Rob (Robert Aramayo), a heroin addict who is seemingly bewitched by Adele.

Adele and Rob are released from the institution and reunite for a weekend at her country mansion where Rob and David, the two men, in her life will meet. The metaphysical aspect of Behind Her Eyes is quite intriguing. Louise, Adele, and Rob are able to astrally project, lifting their consciousness out of their bodies and traveling around to spaces where their physical minds and bodies have been.

In an intricate series of events, the audience discovers that Rob instantly falls in love with David and is so jealous of Adele that he tricks her by placing his consciousness into her body. Adele’s consciousness is trapped in Rob’s old body, which he drugs and throws down a well. David unknowingly returns to  “new Adele,” who leads him to believe that Rob overdosed, and Adele, instead of calling the authorities, threw the body down the well. David decides to keep mum and marry Adele to protect her, but David feels Adele has changed.

Fast forward ten years. Super sleuth Louise figures out what happened and tells David that “Adele” actually killed “Rob” (without having time to tell David about the astral projection). As David travels to Scotland to prove Adele’s guilt, Adele/Rob sets Adele’s house on fire and  tricks Louise into leaving her consciousness to help Adele. Rob leaves Adele’s body and enters Louise’s body. Louise’s consciousness, having nowhere else to land, ends up in Adele’s drugged body unable to move as the house fire rages. Louise, a single Black mother, is murdered  in the body of a white woman. Rob’s consciousness has now appropriated Louise’s body, and he marries David again.

Ever since the character Mammy in Gone with the Wind,  white writers have nourished their comforting stereotype of a dark-skinned Black woman who nurtures the white people in her life even to the detriment of her own personal safety. In this series, Louise has no Black female friends or family. There is no explanation of what Louise’s family of origin is like other than a passing image of a woman who could be her mother in one of her dreams. Louise’s son will be raised by a white man/serial killer in his mother’s body without any of her family who knew the real Louise. How in the 21st century are white writers not seeing how messed up this narrative is?

Are the writers tone deaf or is this narrative on purpose? It’s interesting that we get a nuanced look into Rob’s family but Louise seems to be an orphan. Perhaps the writers can relate better to a white guy’s class and addiction issues? The viewer is given the opportunity to consider the complexity of heroin addiction as a way for Rob to escape from being a member of the working class. Historically, white writers are accustomed to casting gay and trans characters to be the most diabolical mentally disturbed villians. By Episode 6, the audience knows Rob is a two time serial killer who steals the bodies of women in order to attempt to win the love of a straight man. Rob is a 21st century version of Silence of the Lambs, Buffalo Bill, the trans serial killer. Another example of this trope, Netflix’s French thriller La Mante (The Mantis) employs a disgusting amount of transphobia with their serial killer trans villain.

Behind Her Eyes is a deftly crafted story that keeps the viewer hooked. This is the kind of performative racially progressive thriller that scares me. Storytelling carries influence in our society. The gatekeepers of the entertainment industry strive to placate the call for representation by just throwing a Black character and a gay character up on screen in a script written for and by straight white people. I invested six hours of my life that I can never get back in a series that showed me yet another way a white man can take ownership of a Black woman’s body, leaving me feeling disgusted yet again by white dominance.

The team behind this limited series should be ashamed of themselves, but I’m sure they’re not. We don’t live in a post racial world, and no, the UK is not less racist than the USA. The racism just has a different accent. Behind Her Eyes was just another way of reinforcing systemic white dominance by using homophobia and a disgusting form of 21st century full body blackface.

Behind Her Eyes is currently streaming on Netflix.