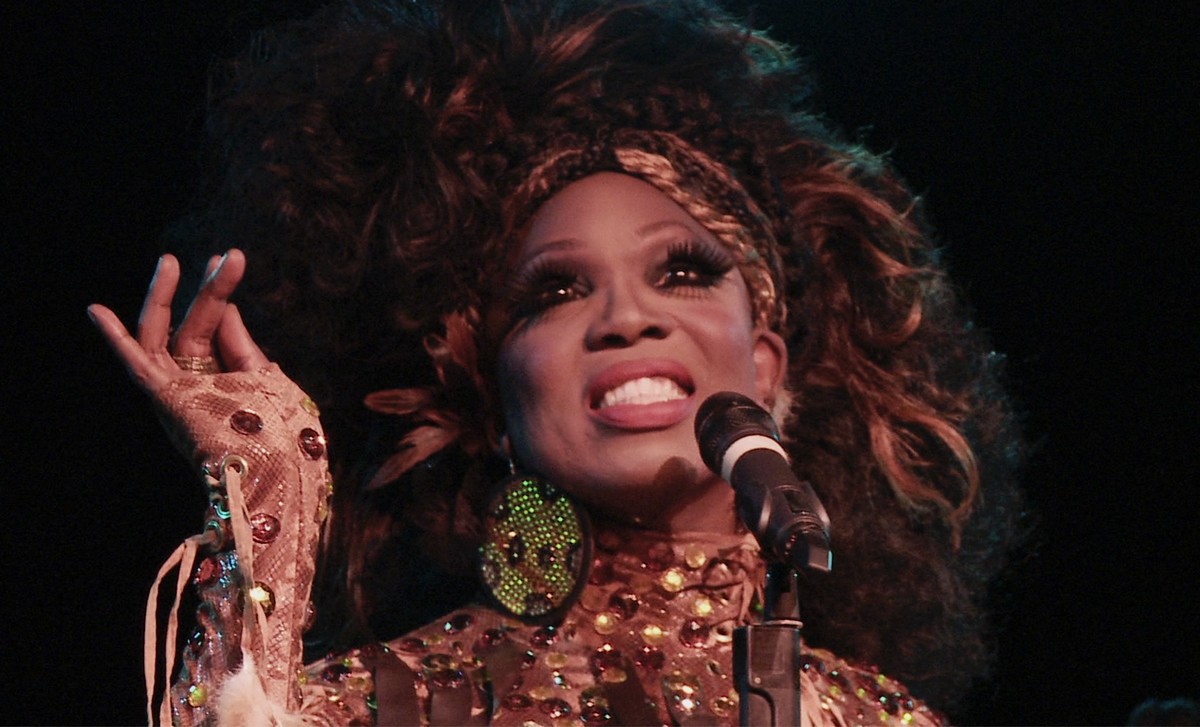 In my head it plays like a bad Weird Al Yankovich impression, “I’ve created a monster! Nobody wants to see Marshall no more they want BeBe, I’m chopped liver.” And yet somehow it fits. I’d forgotten it wasn’t BeBe who coined the “Camerooooooooon” catchphrase. I’d forgotten that Marshall didn’t identify as gay or straight, but simply only as himself. I’d forgotten that he didn’t mind any pronouns, but he wasn’t excited about the use of the word “drag” to describe his art. He was a female illusionist, not just a man playing dress-up. In essence, I’d forgotten the hu-man behind the queen.

Being BeBe is a documentary about the life of BeBe Benet aka BeBe Zahara aka Marshall Ngwa. The Cameroonian performer transplanted to Minneapolis, Minnesota, making a name for himself in the clubs of the twin cities. One fateful night BeBe was visited by RuPaul himself and his life changed forever. Being BeBe shows us the highs (being crowned the first ever winner of RuPaul’s Drag Race) and the lows (being forced to move from New York due to underearning shows) of BeBe’s career and the impact it had on Marshall’s life.

This is not to say the two are separate. During an acting class the instructor tells Ngwa that BeBe is a part of him, just a different side, something that Marshall can access when needed. In this way BeBe Zahara both is Marshall and just one side of who Marshall is. This isn’t an identity crisis — it’s the opposite. In fact, it’s acceptance, and it was not easy to come by.

Shot over 15 years, the onus was on director Emily Branham to narrow down the footage to an actual film. Several times Branham thought she was done (or really just wanted to be done), but she didn’t yet feel like she had the movie she wanted to see. It wasn’t until the nationwide quarantine that she sat virtually with Ngwa and showed him clips of old footage to get a current day reaction. The emotions that flooded Ngwa and the insight he has gained from those experiences help bring the film together into something that is relatable and triumphant.

During LA’s 39th annual Outfest LGBTQ+ film festival, Being BeBe was screened in front of an adoring crowd moments after a performance from the queen herself. She was loud, she was regal, she was elegant and just plain fun. I had a moment to speak with Ngwa about the film and what inspired him to do the documentary.

First off, I have to say that I’m such a big fan!

You’re a big supporter, my dear.

A fan, they come and go, but a supporter sticks with you through thick and thin.

Well then I’m happy to say I am a very big supporter. I’ve loved you since I first became aware of you on Drag Race. How did you come to the decision to make a documentary?

[Laughs.] Well, I don’t know if I decided. Emily contacted me and said, “Marshall, you have to do this.” And she did all the work!

In Being BeBe one of the things I love most is how real you are. You’re candid and very much yourself. Was that a conscious decision while shooting the documentary? To be vulnerable rather than make it all about the persona?

I told Emily that if we are going to tell my story, it has to be real. I think as an artist it’s hard to put on a facade for too long. When you get to see the show, you see the cameras and everything, but a lot of the moments were just intimate between Emily and I. We had developed such a friendship and trust that I felt safe being vulnerable around her. When you’re going through those moments, you don’t even think about a camera being there. You’re just going through it and forget about the cameras completely and you’re just in the moment. I look back and think she just got too much into my personal space. But that’s the point of the story. I think everyone enjoys the glitz and the glamour, but the reality is that artists in that space know exactly what this is and how it feels.

Early in the film you mentioned you’d like to do more in regards to LGBTQ+ rights in Cameroon, but there was an implication towards your loved ones and family. There is a part where you’re able to support a pair of men who had been in jail just for the crtime of appearing gay. Do you feel like in the last 15 years it’s gotten less difficult to support LGBTQ in Cameroon?

Absolutely not. There’s still a lot of pushback. I think it’s going to be awhile, it’s going to be a process. There was a transwoman who was hanging out with a friend and got sentenced to 5 years. This is current. There are so many different organizations that are really great at supporting them, and the best way to help is to help those organizations. I do that, but to show myself as the face I have to be careful. I can’t be selfish. I have family and people back in Cameroon, and the best way to get to you is through your family. I do not want to draw attention away from the issue or cause a spectacle. I am proactive in supporting in my way, but I also have to be sure that people know it’s not always about me.

[Ngwa is referring to YouTube celebrity Shakiro. She and her friend Patricia were both detained in May for “attempted homosexuality” while they were sitting in a restaurant.]

There’s still so much work to be done.

Yes. I’m privileged and I dress up in drag and entertain you guys and at the end of the night I go home, while there are people back in Cameroon — they can’t even dream of that. So there are so many different organizations out there that we can support. The people down there doing the work.

[The Being BeBe team is currently working to screen the movie in Cameroon. There is a line of outdoor cinemas called Sundown Cinemas, one of the few places where LGBTQ+ movies are screening in Africa.]

What would you say to the new generation of queens as they start their journey?

Don’t do it! [Laughs.] Definitely they should ask themselves why they want to be a drag queen. There’s so much to it and if you go into it with the right motivation then that will get you through the high highs and the low lows. As a young artist, I knew that this was all I could imagine myself doing. I had my why, and it helped shape my journey. But if you have it in your spirit to do it, then find your why, and go and do it!