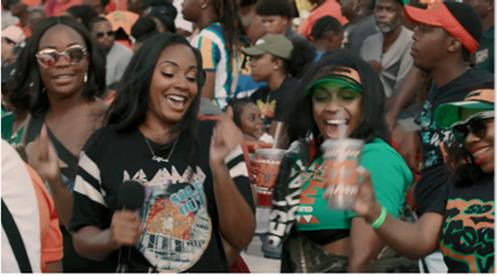 Hosted by actress and content creator Jasmine Luv, BET Digital’s We Own Homecoming dives deep into the illustrious legacies of Historically Black Colleges and Universities (HBCUs) through the lens of one of the most important times of the academic year: Homecoming. Jasmine Luv will hit the road visiting several HBCUs, and focus on different aspects of the annual celebration from the perspective of students, alumni, and city officials. The eight-episodes series will thread each HBCU’s distinctive story, their significant contributions to black history, culture and why each school owns homecoming in its own unique way. BET has launched series with new episodes of We Own Homecoming airing on Facebook Watch every Thursday.

On today’s episode, We Own Homecoming visits Clark University  and highlights how the institution stands out from the 3-university “Atlanta University Center.” The series kicked off with the dos and don’ts of Homecoming and has traveled to Florida A&M University and Texas Southern University. Additional HBCUs featured in upcoming episodes include Morehouse College, Winston Salem State University and North Carolina Central University. Each episode will examine how the schools shine during homecoming, from the football game that brings the glory, to the tailgate that brings the fellowship, and the Greek life that represents a lasting generational connection. Homecoming week as a whole represents the significance of black dollars and economic empowerment to the small cities in which the universities exist. We Own Homecoming highlights this impact.

To watch new and previous episodes of We Own Homecoming visit: https://www.facebook.com/watch/BET/1210703672467567/  Join the conversation by following and using the hashtag #WeOwnHomeComing and @BET.