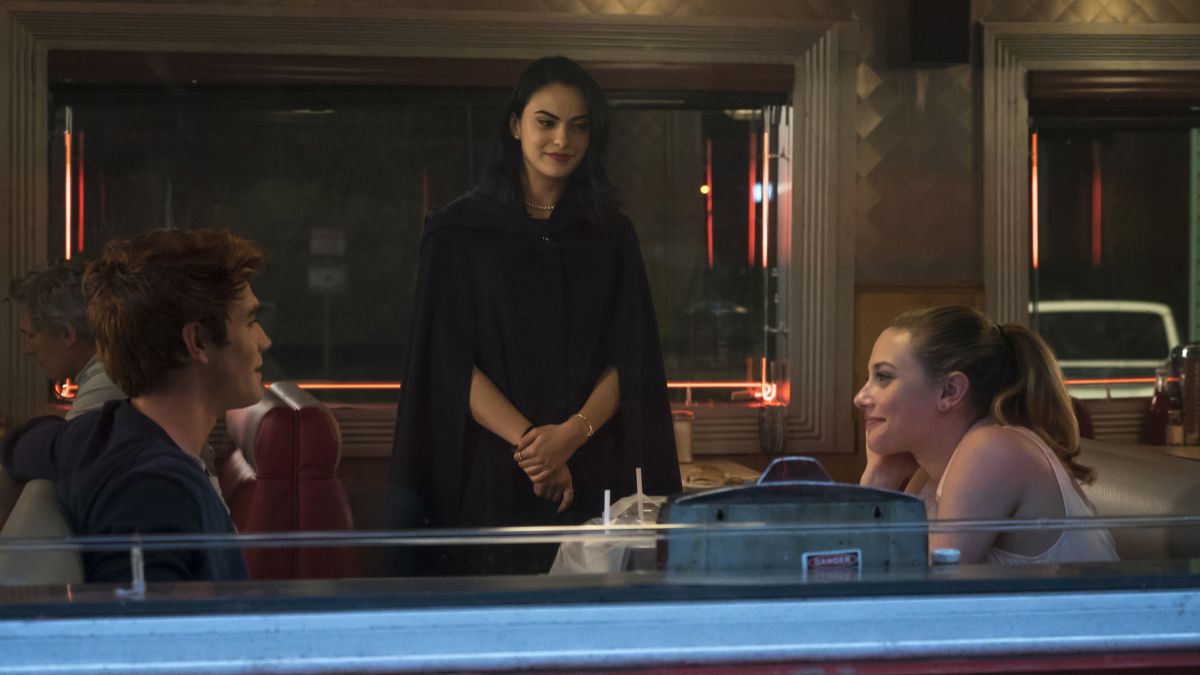 In our post-Pretty Little Liars world (well, at least it will be this summer), you can’t have a teen drama without murder. The days of Gossip Girl, fueled mainly by attractive teenagers behaving badly, seem long ago and far away when a dead body has to turn up to make things interesting. For whatever reason, no one quite believed Archie Andrews and his friends could make it on the small screen without catching a body. That’s probably the only truly absurd thing about Riverdale — its sexualized, hormone-fueled landscape (right down to the neverending love triangle between Archie, Betty Cooper, and Veronica Lodge) is perfect for The CW even if it looks a lot different from the comics’ wholesomeness.

But being a perfect CW show can be more trouble for a show than a benefit (just look at The 100). The CW is the bastion of teen drama where potential is abundant and execution not always there. Riverdale, developed by Roberto Aguirre-Sacasa (who also brought the zombie apocalypse to Riverdale in Afterlife With Archie), has lots of potential and “The River’s Edge” makes a decent go of realizing it.

The show is Gossip Girl meets Twin Peaks: it has some nice visuals, all the more to heighten its noir-ish elements which include Jughead providing some (very wooden) narration. The story-launching death is that of Jason Blossom, brother of Queen Bee Cheryl (Madelaine Petsch), and hints of his shady past (not to mention his demented sister) imply he wasn’t the golden boy Riverdale pretends he was.

The mystery adds more to Riverdale than the typical coming of age plot, but it hardly feels necessary. There’s a reason Gossip Girl, The OC, One Tree Hill and their kind lasted as long as they did: teen melodrama works.  Even with Jason’s body turning up in the final moments, with the promise of the first arrest to come, I’m less concerned with who killed him (would Riverdale be so bold as to make one of these cute comic book kids a killer?) and more interested in Betty and Veronica.

Also in typical CW fashion, the ladies on this show have more going for them than the men, and Betty and Veronica are electrified by the show’s take. Betty (Lili Reinhart) is sweet but quick to roll over when challenged, either by her controlling mother or Cheryl. She only stands up for herself when the more outspoken Veronica (Camila Mendes) gives her a nudge, eventually culminating in a spot on the cheerleading squad and Betty confessing her feelings to Archie. Veronica, looking to redefine herself after her father’s arrest, is determined to be a better person (like Betty). She mostly succeeds, up until she kisses Archie, and the betrayal of hers and Betty’s young friendship sends her crying into her mom’s lap.

The premiere walks a fine line between the girls as friends and as romantic rivals. Betty invites Veronica to come to the dance with her and Archie (the fanfiction writes itself), and Veronica spends the bulk of the episode encouraging Betty to tell Archie how she feels. Though it’s clear to both girls that they share an attraction to Archie, watching the two develop a bond (though it has a bit of a dent in it by episode’s end) is a sweet relief. I could have done without their kiss, since they’ll never be a thing (queerbaiting is also very CW), but Betty and Veronica may be the best “The River’s Edge” — and perhaps the show — has to offer.

The murder plot isn’t that engaging yet, there are some pieces of backstory that may prove juicy down the line (like Betty’s absentee sister), and we may have to wait for our male protagonist to grow into something interesting, too. Archie (K.J. Apa) got hot over summer break, and this at least makes a case for why Betty and Veronica will spend the rest of this show competing for his affection. He’s hot but boring (which is not unusual for a teenage boy, if I’m remembering correctly). Not an offensive boring — I wasn’t in a hurry to get past his scenes, just in a hurry for them to be more. His struggle to balance football, his dad’s construction company, and his new music ambitions are already dull, but the premiere seems to nip that in the bud so we can move onto something else. Like why he and Jughead (Cole Sprouse) are on the outs, another interesting tidbit that’s only nodded to in the premiere. But it’s opposite Jughead that Archie shows signs of life, though he’s soon back to being a confusing teen boy when he tells a heartbroken Betty he’d never be good enough for her.

If Riverdale intended on being a Betty and Veronica adaptation plus some murder, “The River’s Edge” would be a clear success. Since that isn’t what it’s going for…it’s got room for improvement. Later episodes will likely correct the problem of Jughead’s relative invisibility, and hopefully his bad prose (“We live in a town. A small town.”). Maybe we’ll get more of Cheryl than her inexplicable awfulness and vaguely incestous relationship with her brother. And of course more Reggie Mantle and Josie and the Pussycats.