Like anything, the more you do things the better you get at it.  This improvement comes from realistic expectations and a familiarity with that thing.  I think conventions are no different.  As I have intimated on various occasions, the Baltimore Comic Con is a convention for those who make, love, and collect comics.  As always, there are choice artists and writers.  It is not unusual to have Neal Adams, Tom Palmer, Louise and Walt Simonson, Ken Lashley, and Meredith and David Finch at the con, but there is also a great depth of independent talent that helps set the tenor of the convention floor.  Being my fourth year coming, I am starting to see  some regular faces and also be seen as one soothe conventions is more of a homecoming than a shopping center visit.  As a result, it’s almost like there are no strangers just old friends to catch up with.  This year was nothing new.  It was great to see some of the talent that BGN has followed for years. 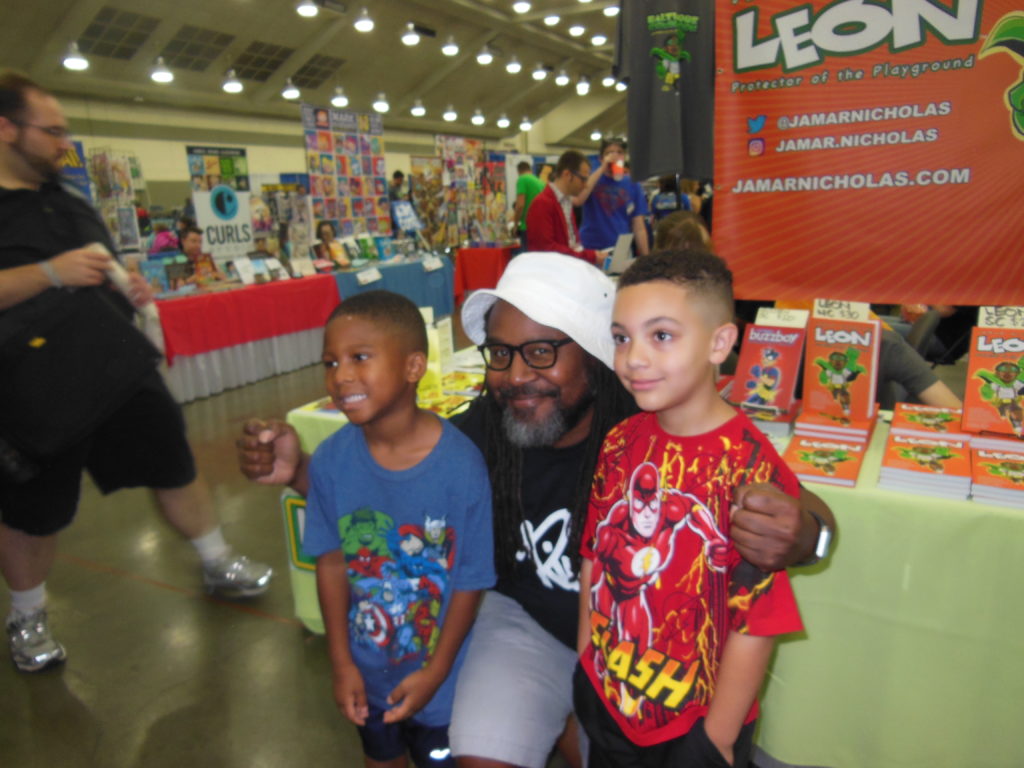 This year I had the great pleasure to see Afua Richardson again.  We at BGN just can’t get enough of this talented young lady.  I discovered Afua by accident flipping through an issue of Preview where I was caught by this incredible cover.   A beautiful black woman amongst a snake of crime scene tape.  Afua is the evidence of why having people of color (poc) draw poc is so important.  Her black women are not brown Barbies , but black women with glorious curves appropriate to a woman’s height and weight.   You can check some of her more recent work in Black Panther: World of Wakanda. 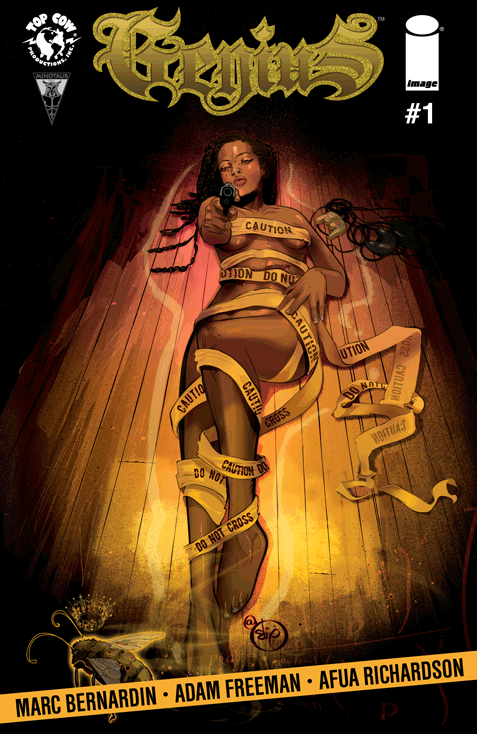 Next to Afua was my favorite Frenchmen, Fabrice Sapolsky.  Fabrice is the creator of Spider-Man Noir character, my favorite Kickstarter title Harem, and more recently was the writer for Dynamite Comics – Intertwined]].  Intertwined explores the more mystical element of martial arts without the recent campiness and poor acting surrounding Marvel’s Iron Fist.  Always cheerful and a joy to talk to, Fabrice took the time to do a quick sketch and cemented his place as one of my Baltimore faves.

Talking to Stranger Comics’ darling Darrell May and Sebastian Jones is always such a joy, but once again did it up right with their stand-ins for two of their comic book protagonists Niobe and Dusu.  I have to admit, Dusu rocked my convention, as well as the lady he picked up for her photo op.  BGN has traveled through the World of Asunda with Sebastian, Amandla, and Darrell finally got to read Niobe: She is Death.  One of the interesting aspects of the Harry Potter novels was that the content and complexity increased as Harry got older.   As discussed with Jamie earlier this year, Jones enlisted Sterling to… of his character Niobe.    It is interesting to see Niobe’s journey alongside Sterling’s blossoming recognition of her talent. 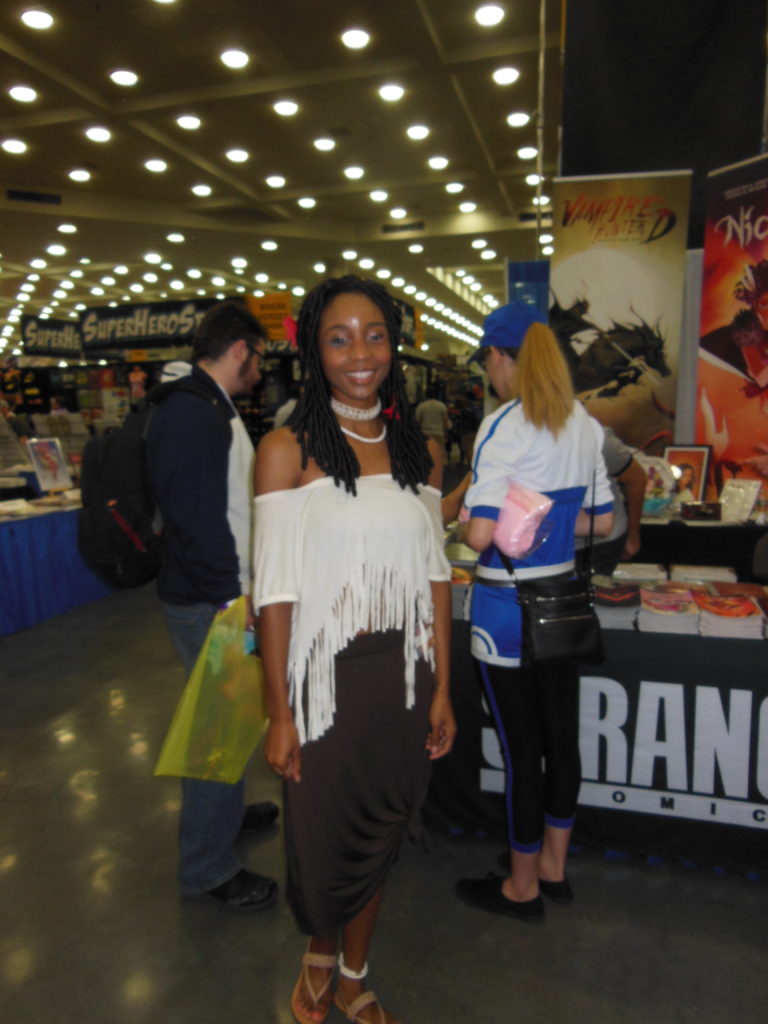 This year at the Baltimore Comic Con, artist and educator Jamar Nicholas was the featured comic guest at the convention. While he did not sing like media guest Lynda Carter, BGN did get to sit down and ask him a few questions about his graphic novel Leon: Protector of the Playground. 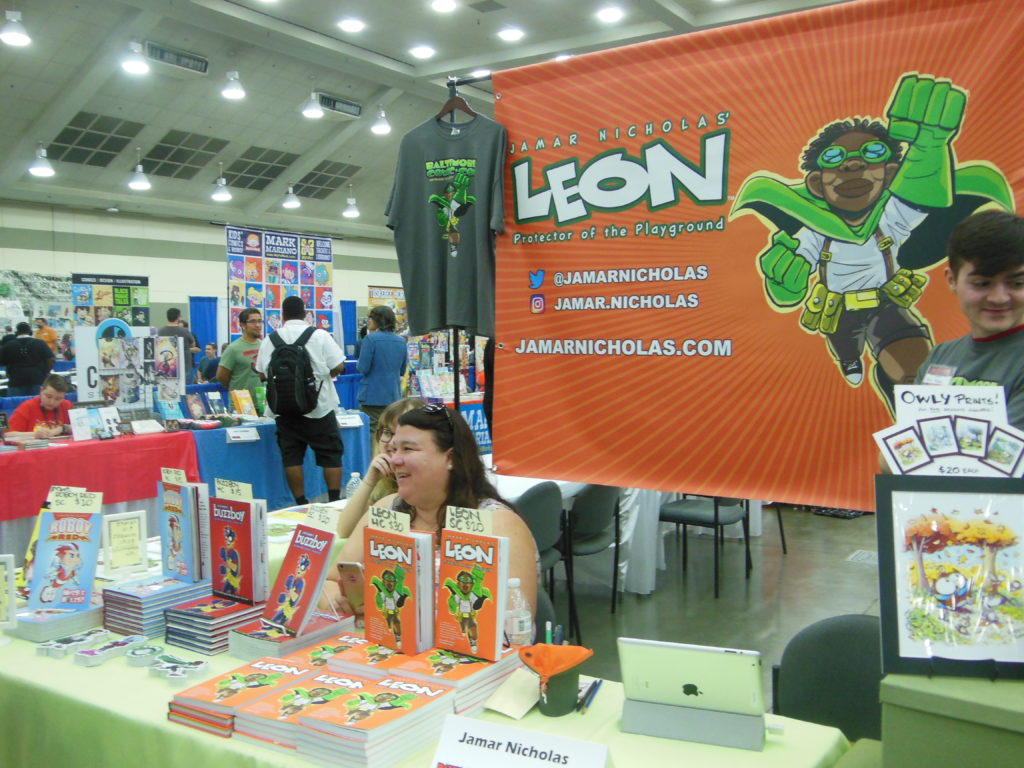 What I liked most about the graphic novel was that it didn’t feel like a public service announcement for/against good behavior, but more of a normal pre-teen angst of a young man who is starting to come into his own.  Although the graphic novel has only been out a few months, I was not alone in my zeal  for this title, as the t-shirt were flying off the shelf  and even more impressive was coming across one  youngster, who actually cosplayed Leon.    I’m sure this is not the last we will hear about Nicholas, and I recommend that you pick up a copy.  You can get Leon: Protector of the Playground and other titles by Nicholas on Amazon or online at https://mkt.com/jamar-nicholas-studios/ .