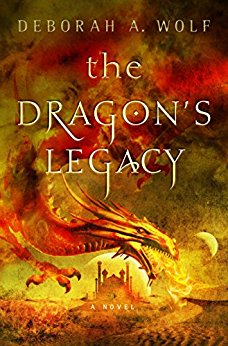 The Dragon’s Legacy is an epic fantasy novel like no other. But first, here’s a brief synopsis of the story…

The last Aturan King is dying, and as his strength fades so does his hold on sa and ka. Control of this power is a deadly lure; the Emperor stirs in his Forbidden City to the East, while deep in the Seared Lands, the whispering voices of Eth bring secret death. Eight men and women take their first steps along the paths to war, barely realizing that their world will soon face a much greater threat; at the heart of the world, the Dragon stirs in her sleep. A warrior would become Queen, a Queen would become a monster, and a young boy plays his bird-skull flute to keep the shadows of death at bay.

So, a dragon is asleep, and if the dragon wakes up it will crack the world open like an egg. Moral of the story? Don’t. Wake. The. Dragon. Of course, it’s not as simple as that.

And so, just like life, this story is anything but simple. The writing is very poetic, which according to taste can be a good thing or an annoying thing, but here are a few things that made The Dragon’s Legacy very enjoyable for me.

The Power of Women

There are mothers, warriors, queens, rebellious teenagers, wise women, morally ambiguous women. Women with their own minds, hearts, fears, and desires. All fully fleshed out. None stereotypical.

Let me start out by saying: there’s a conveniently placed glossary at the beginning of the book, and you are going to need it. Personally, I didn’t enjoy the fact that I had to interrupt my reading pace to go back and check references. However, the story was just that good, so I willingly did it.

There are four main lands in this novel: Atualon, Sindan, Quarabala, and The Zeera. Each of them has their own history and culture, which makes for a very complex and fully developed world.

Atualon is the seat of the Dragon King and is said to be built on the back of a sleeping dragon. A dragon that needs to stay asleep. The magic of Atualon is known as atulfa, and only those born with the ability to hear this magic have the potential to manipulate it, and only those raised to the throne can be trained to wield it. Note: the current Dragon King is losing his power.

Sindan is the home of the powerful Sindanese Emperor, and let’s just say he wants the Dragon King’s power more than anything else. Homeboy is obsessed.

Quarabala was “once a place of beauty and art” but was “scorched clean of life and hope” over 1,000 years ago. There’s also some shadowshifting sorcery going on…

Finally, The Zeera is the golden desert home to the great female warriors. It too was once a “proud and prosperous nation” but is now a shell of its former glory.

Like Hafsa Azeina, for example. She’s a dreamshifter who, among other things, can kill people in their dreams, and she’s also the queen consort of Atualon and mother to Sulema, a key character in the novel. Azeina’s story, struggle, and sacrifice were by far the most compelling. And she was the most powerful, feared, and misunderstood character in the novel.

A Strong Sense of Foreboding

The Dragon’s Legacy is the first book in a series, and like many first books in an epic fantasy series, much of the story is spent building up the world and setting things up for the future. This can be both great and annoying to readers. On one hand, you get immersed into an intriguing world, and on the other, you’re left wondering if anything actually happened in the book you just read.

By the time I finished this novel, I felt I had both a strong understanding of the world itself and a strong sense of foreboding based on the events that took place. Like, oh sh*t. It’s about to go down, and this isn’t going to go over well.

In short, newcomers to epic fantasy may find themselves a little overwhelmed by unfamiliar words, names, and etc… However, if you are a fan of the epic fantasy genre, The Dragon’s Legacy will give you everything you’re looking for and more. I’m looking forward to the next installment.

I received an advanced reader copy from the author/publisher in exchange for an honest review.