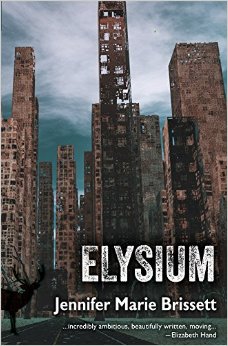 This article was originally published on themiddleshelf.org.

Adrianne walks in the busy city she lives in, sees an elk that no one else sees, goes shopping and then is a victim of a random accident. She goes home to her partner, Antoine, but he is so distant.

Adrian lives in the city. He takes care of his partner, Antoine, now in a terminal stage of an illness. Once a week, the nurse takes over and he meets up with his lover, Hector.

Adrianne fights with her partner, Antoinette. Antoinette is now in a terminal stage of an illness. Though she wants Adrianne to live her life, she warns her about her lover, Helen.

You’re confused? Yes, so was I. The confusion is strong until you accept the gender and life changes of Adrian/Adrianne and Antoine/Antoinette and Hector/Helen. And then, you just go with the flow of Adrian/Adrianne and Antoine/Antoinette being lovers, brothers, brother and sister, father and son. Orlando by Woolf comes to mind, obviously, but Brissett manages a much more intricate and overlapping story for her characters, with echoes artfully organized as a palindrome. The characters, thanks to her remarkable writing, remain wonderfully cohesive whatever changes she brings to them.

Little by little, you understand that what holds Adrian/Adrianne and Antoine/Antoinette is love, whether it is romantic love or love for a sibling or a child or a parent. They and this love cross over lives and situations, always in or around the city.

But the story has a darker and grimmer tone to it. War is coming. And war it is indeed. Soon, the love between Adrian/Adrianne and Antoine/Antoinette is intermingled with destruction, death, invasion.

Brissett brings scope to Elysium by putting very ordinary humans in the middle of sweeping events, where the real battle, in fact, is for truth. A battle that may be lost already.

There are a couple of (consensual) sex scenes in the beginning that may put off some readers, but they serve a double purpose: underlining the gender differences between Adrian and Adrianne, but also showing the complexities of love and desire. Nonetheless, Brisset doesn’t limit love to romantic love and that gives a real depth to the story.

The confusion may also put off some readers because you really need to reach the ending of Elysium to make sense of it all. The ending isn’t an immense surprise, but it is extremely satisfying because the reader can look back at all the confusion from the previous pages and say, “Yes, that’s what I read and it makes beautiful sense.”

Elysium is an extremely bold novel because it takes guts to write something so far from mainstream stories and mainstream storytelling. Brissett dared to shake her characters’ lives and situations at the turn of a page, to mix classical myths, history, and symbolism with sci-fi tropes. But in the end, she reaches something truly universal and powerful about love, survival, and truth.