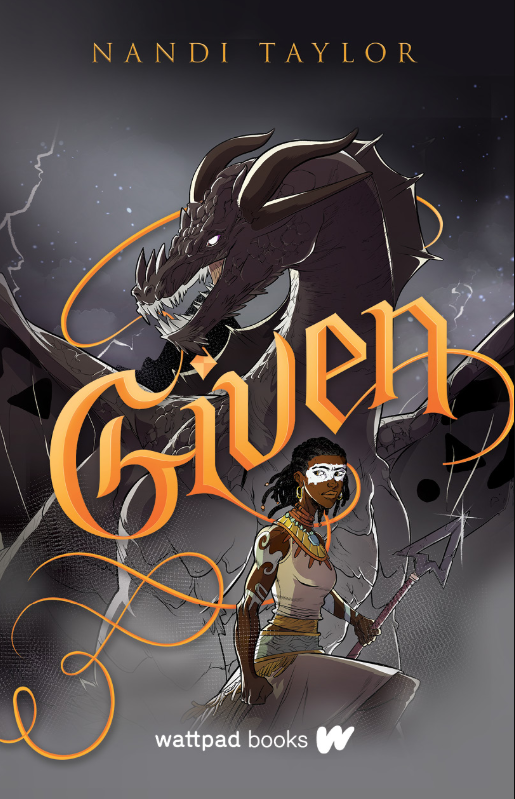 How do you create a fresh story with a captivating world and innovative magic systems in a genre as overrun with tropes as fantasy?

You make it Black.

Whether or not it’s going to become mainstream, Afro-fantasy is the new wave for me. As far as I’m concerned, old Gothic castles and lily-white elves and fairies can move entirely out of the way for African-inspired palaces and rich tribal lore. If the usual fantasy stories have never appealed to you, now may be the time to do some reevaluating. And although I do not like comparing works, it’s definitely worth noting that if you were a fan of Children of Blood and Bone by Tomi Adeyemi, I cannot recommend this book enough.

Given by Nandi Taylor is the story of Princess Yenni Aja-Nifemi ka Yirba (and yes, your mispronunciations will be corrected). Yenni is a regional master of runelore magic and one of the most skilled warriors in the realm. While she may not be the most ladylike princess you’ll ever meet, that is of very little consequence to her.

She is on a mission, first and foremost, to save her father from a mysterious illness and prevent political unrest from endangering her tribe. On a secondary note, she may also coincidentally be taking a break from her royal life and giving herself some time before her expected marriage to an allied prince. On the sacred journey of Orire N’jem, Yenni is given the blessing of her people to travel to a far-off land in order to master a new kind of magic that may be able to save her father and their people.

Cresh is the colonial power of this fictional world, and from the moment Yenni sets foot on its soil, she is othered in a way that is equal parts fascinating, confusing, and infuriating. Given expertly explores concepts of colonization, xenophobia, and the experience of immigration on a variety of levels that is deeply resonating. The book does a great job of creating parallels of real-world microaggressions and showing distinctions between malice and ignorance on the part of the aggressors. It demonstrates how to navigate the missteps that come with inexperience and unfamiliarity with other cultures in a way that allows for forgiveness and the formation of strong, lasting relationships. As much as we the reader may feel for Yenni while she is on the receiving end of most of the ignorance, she still has a lot to learn herself.

Many of the strange new Creshen people rub Yenni the wrong way, but none get under her skin so much as Weysh Nolan.

Weysh is dragonkind, one of a small percentage of the population that can shift effortlessly from human to fire-breathing beast in an instant. He is strong, attractive, and fully aware of both of those things. He is also, according to him, Yenni’s Given — mate, life-partner, match, etc. Whatever you want to call it, the princess is not interested. While Yenni tries to avoid his distractions and focus on becoming a top-level student at Cresh’s most prestigious magic academy, Weysh struggles to wrap his mind around the idea that you can’t just pick a random woman off the street and make her your wife.

I found the treatment of this character incredibly refreshing. Taylor dismantles so many of the toxic molds that are often fitted to male leads of this genre. In many ways, Weysh has the toxically masculine persona that fantasy Bad Boys™ are always dripping with. But unlike many YA books of the past, Taylor exposes that behavior for the nonsense that it is and gets to work shaping a character that we can enjoy without any moral reservations.

As for the writing, all good fantasies rely on strong world-building, and Taylor delivers. The way she delineates the various cultures through their customs, ethnic identities, social hierarchies, and expressions is masterful. On that note, one of the most interesting aspects of the book is its use of religion and spirituality. Yenni and Weysh have very different religious frameworks, and with these come a slew of challenges to overcome.

I had a lot of fun with this book. Although the subject matter was heavy at times, there was plenty of levity to keep me laughing and smiling throughout. While there is not yet talk of a sequel, I for one would be more than happy to dive back into Yenni’s world. With an ending that offers just the right amount of satisfaction and future intrigue, this book will definitely leave you wanting more from Nandi Taylor.