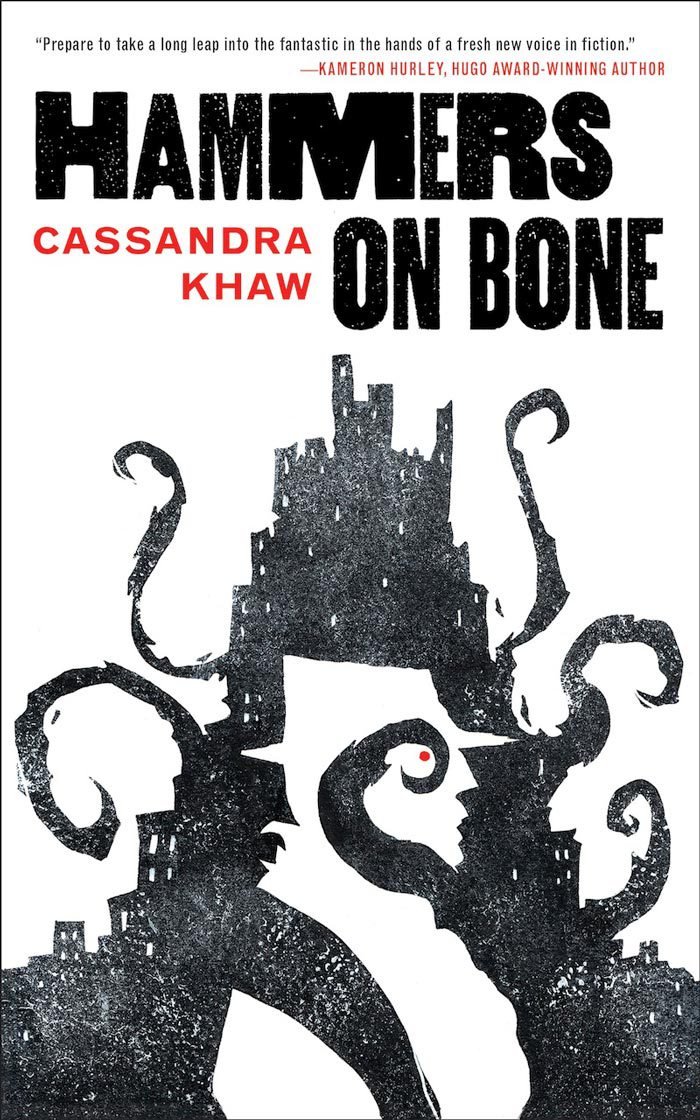 What struck me the most about Hammers on Bone, a novella by Cassandra Khaw, was how much Lovecraft’s universe was an influence. “But”, you’re thinking, “Lovecraft was a stinking racist. Isn’t there a paradox here?”

That it is a Lovecraftian novella can’t be doubted. But it also happily turns on its head all the racist tropes you can find in a Lovecraft story.

John Persons is a private investigator in contemporary London, hired by a boy who asks him to kill his stepfather because he is a monster. And it turns out Persons is one too…

This short novella mixes and shakes many genres: at heart, it is fantasy, but the monsters and the body horror makes it horror too–though it remains within acceptable limits unless you have issues with eyes–so, in a way, that would also make it urban fantasy since it takes place in contemporary London, and the character is, in his tone and behavior, pretty much a hard-boiled detective, which would bring us to an urban fantasy noir horror novella. Yes, all of that.

The short format keeps the pace lively. There are action scenes, a mystery to uncover, and a villain to beat. Add to that monsters with repulsive physical aspects, and you end up with a story that will remain gripping all through its 60 pages or so, though it can feel a bit rushed sometimes.

The first person narrator is more or less two persons: there’s the ‘I’ who reveals himself pretty soon to be one ancient creature (though not an Old One), and there’s the body he inhabits–the one of a Black man who has the tone and speech quirks of a 50’s private investigator. This mix brings an original style, which can be often funny and always well written.

Sadly, the secondary characters are a bit hastily drawn, and sometimes they even feel a bit too stereotypical.

But I particularly appreciated the metaphor of the story. Though it is an unabashed Lovecraftian monster story, it is also a metaphor against pedophilia that aims to empower the victims of this crime: the real monsters are transformed into monsters with many eyes and tentacles and a stink of rot and seaweed, but the situations remain the same.

Hammers on Bone opens a series. The next volume, A Song for Quiet, is to be published in August 2017. The ending is devoted to setting up the next installment, which sounds intriguing and probably epic, but I’d have preferred it if more space had been given to this story rather than hinting at the next.

Even if this novella does have some flaws, it’s nonetheless a great debut which is well written and which, I think, will be even more enjoyable once the next volume is published.