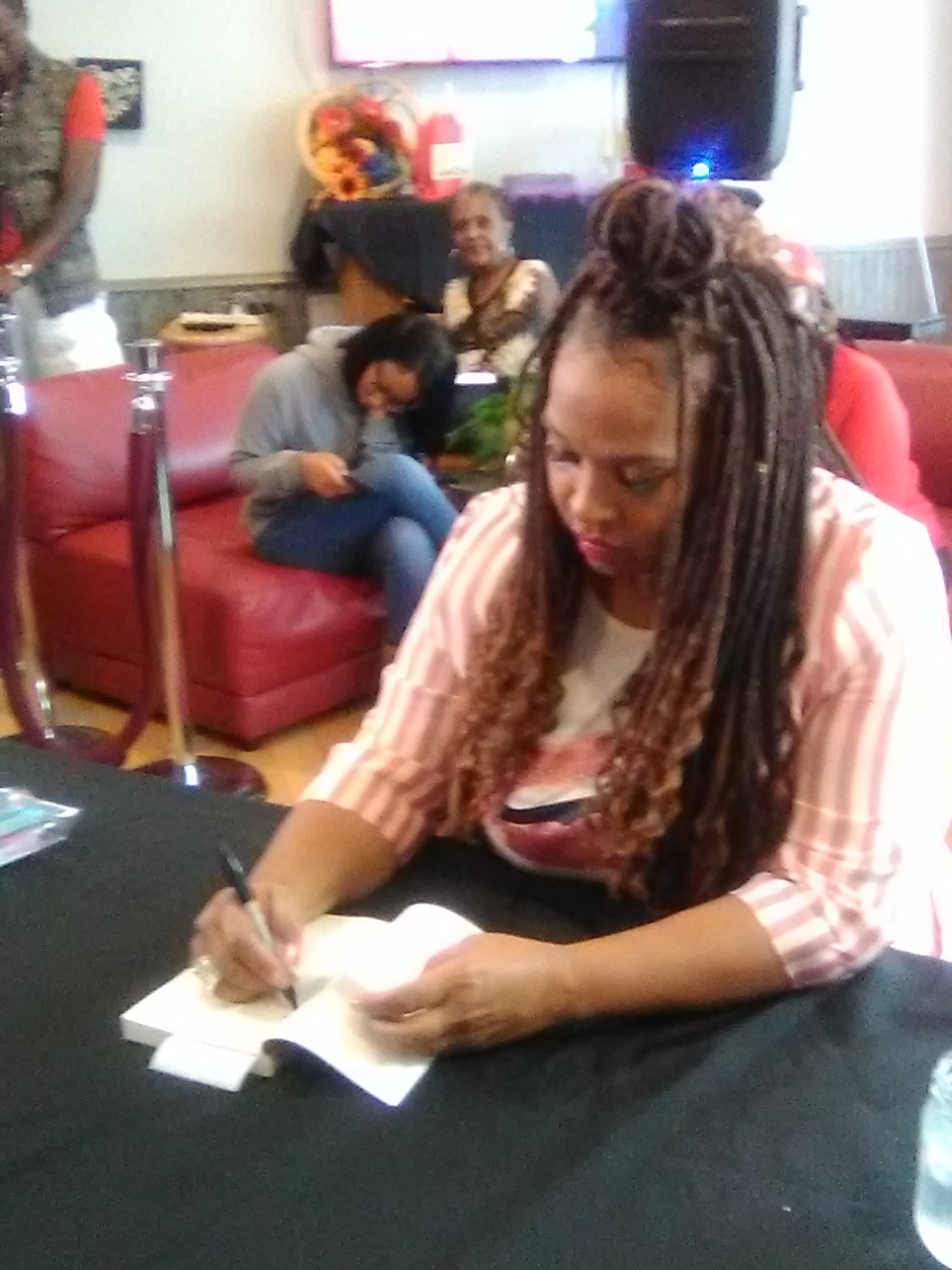 When I noticed the cover art for actress, comedienne, and, now author, Kym Whitley’s debut novel, The Delusion of Cinderella, I knew right away that this was not a rendition for children.

“This is not for the faint of heart! You cannot, I repeat, cannot read this Cinderella story to your babies,” Whitley said to a standing room only crowd at J’s Breakfast Club in Gary, IN, where her book signing took place on Sept. 29. Whitley, a Fisk University alum and a member of Delta Sigma Theta, was welcomed by fans, sorority sisters, and fellow “Fiskites.” Prior to discussing The Delusion of Cinderella, Whitley approached a young girl and asked her age. When the girl replied “11,” Whitley’s comical and motherly instincts kicked in. “Aw, naw, baby. When I start reading this book, you may have to go outside!” 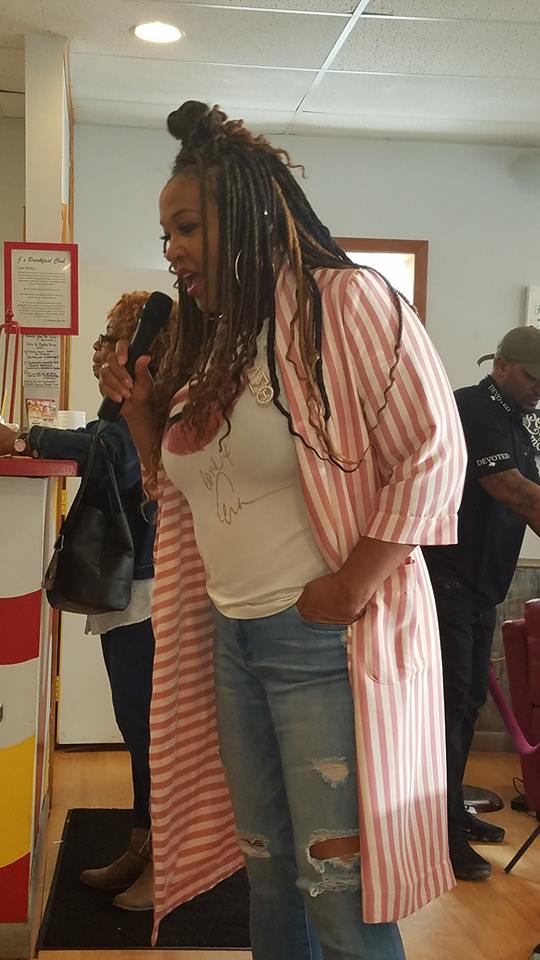 The Delusion of Cinderella is a love story about a young college girl named Jade. In the book, Jade learns about sex, love, self-esteem, heartbreak, destruction, and picking up the pieces. The Delusion of Cinderella opens with Jade’s first lesson about sex. “My earliest sexual memories were the sounds of my mother experiencing her daily after-school orgasmic explosion at the home of her very married boyfriend, Mr. Frank.” The daily visits to Mr. Frank’s house include access to a TV, all the candy Jade can eat while watching TV, and a brand-new Barbie doll. The latest doll (dressed as Cinderella) is the last one Jade gets from the man, as his wife shows up unannounced. The explosive scene ends with the Cinderella doll tossed by Jade’s mother, who dispels the term, “happily ever after” figuratively and literally.

Fast forward to Jade as a college student. She falls in love with this guy. Dre is a handsome, smooth talker. Dre is Jade’s first love. Dre is that guy who can talk a girl out of her panties, and Dre does just that, to Jade. Jade’s sexual revolution is awakened, and so has “Nita,” a name Jade tagged for her vagina. You know the saying, men think with their…? Nita is practically a separate person.

But, like the fairytale, the clock strikes midnight when after a lengthy relationship, Dre disappears out of Jade’s life. There’s no glass slipper, no carriage that is now a pumpkin. Jade is jaded, and the aftermath is not cute. The Delusion of Cinderella stands up to its title. It shows Jade as she goes through a spiral of self-destruction, obsession, heartache, and revenge sex. To put it mildly, “Nita” gives Jade the power. She goes on a dangerous journey that’ll make Carrie Bradshaw blush. 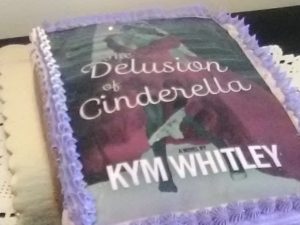 The Delusion of Cinderella also features a friendship between Jade and another delusional girl named Monica. They meet as children. Monica goes through her own delusions of love and trust. Like Jade, Monica is #TeamPrinceCharming as long as it includes cash and designer everything. Midnight strikes and so does Monica’s lover and abuser, Shawn. Shawn abuses Monica physically and emotionally. Monica is willing to live with that, even if it means putting her passion on hold and her life in danger. It’s not until Jade and Monica go through separate, but major and tragic events, that they have some decisions to make.

The Delusion of Cinderella is raw, intense, and blended with humor. Although it’s fiction, the topics of domestic abuse, promiscuity, self-hate, mental health, and make the story relatable to young girls, women, and men. “This is a story about first love,” Whitley told the audience. “You know that first love is the one you cannot compare to others. Our parents talk about the birds and bees. They talk to us about sex. But, what they don’t talk about…is love and heartbreak. And how to handle that. My mother didn’t have that conversation with me. She gave me a book, and was like, ‘good luck!’”

I asked Whitley what inspired her to write The Delusion of Cinderella. She said that she had a lot of stories in her that stem from her acting career and as a comedienne. Originally, Whitley was urged by her agent to write a self-help book. She added that at the time, she had a reality TV series on the OWN Network (Raising Whitley), so she could not write a novel like The Delusion of Cinderella. “It was all about protecting the OWN brand, so the agent suggested that I write about being a mother,” Whitley said. “But, I was a new mom and I was uncomfortable writing a book about being a mom. I did not know how to be a mom. Other celebrities were writing self-help books, so I wanted to be different. I wanted to write something that will help you escape from all of the mess that is going on today.”

Whitley went on to say that she is interested in telling stories involving girls. “I had a great upbringing [her father was an architect]. But, my mother also said that she did the best that she could with what she had.” 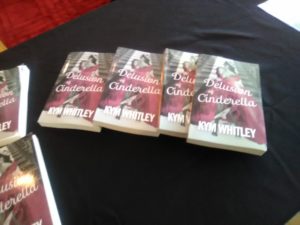 The Delusion of Cinderella is a great and quick read. I finished in two days. Whitley is a great storyteller. I felt that I was in the thick of all the action taking place in the chapters. Whitley was asked if she plans to write a sequel and other novels. “It all depends on how well this book sells. So, please buy it. Read it, write reviews, and tell your friends about my book!”

The Delusion of Cinderella is available on Amazon, Barnes and Noble, and wherever books are sold. Follow Kym Whitley on her official website, www.iamkymwhitley.com and Twitter @kymwhitley.