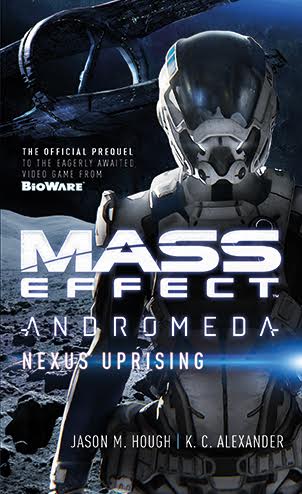 As an avid video game lover (I had just purchased the new Mass Effect: Andromeda on Xbox One, the game which this novel is a prequel to), I literally jumped at the chance- I hopped up and down when I saw the email invite- to read one of the stand-alones based on my beloved franchise. I was initially worried that the book wouldn’t be able to capture the spectacle and intense interplay of the different characters, alien races, and dramatic story choices that you come across in the epic, and impressively long game of action/space drama.

But I quickly realized that diving into this book wasn’t going to be a problem, even without my ability to choose my male or female Captain Shepherd character, or his/her specialties’ and possible lovers (previous Mass Effect games). While I was initially disappointed with how much prose there seemed to be in the Prologue, I realized that there was a lot of information to introduce. I prefer for character interaction or dialogue to “tell the tale” with the classic “show me instead of tell me” method, and there was very little dialogue in the beginning. Then I realized the authors were trying to set up a very large plot line in a very large universe. And it was done pretty well.

There was enough information to make it interesting and not-overly-complicated for a newbie to the universe, while still giving us enough info to keep a knowledgeable reader curious. I also appreciated the choice of an omniscient third person POV. Our journey lies mostly with a human, Director of Security Sloane, who was interesting, flawed, and written well. We get enough hints and details about her past and personality to enjoy her without ever really knowing her full story.

Like most books, there were things that I really loved and things I found slightly lacking. And so, I moved deeper into the book (and warning- this is a considerable-sized book- lol), and I was happy to say that I stayed more pleasantly surprised rather than peeved or annoyed.

Though I felt like I had to slog my way through the cool and somewhat unenergetic prologue, I was not expecting the sudden action of the first chapter. Sloane is more fully fleshed out, more 3-dimensional, with actual action going on, and I suddenly didn’t want to stop reading.

One of my favorite things about the Mass Effect Universe is all of the different races that exist in the Milky Way when humans stepped away from Earth. The many different races were introduced skillfully–all of their historical, sociopolitical, and past dramas were interwoven with the current action of the book very well.

I absolutely loved the interplay between Tann, our Salarian mathematician and sudden default committee leader, and Kesh, the absolutely beautifully depicted and complex Krogan character. I found the drama between the different groups, especially as they struggle through sudden and frightening drama, exciting. And I loved the realistic thought processes behind people who planned to be trailblazers and turned into refugees instead.

Truly, the only things that I didn’t enjoy as much in this story were: the fact that it really felt like it slowed down in the middle. The huge dramatic action of the first chapter eased into a dull monotony for several chapters with only small upticks. While this was a little dismal and too quiet for me, it did make me feel like the actual characters themselves, struggling with how to fix their many flawed and broken issues. But until the mutiny occurred, and once-compatriots were suddenly at war, I actually felt like I was drifting out of the story.

And this last point is not really the fault of the book. There are limitations to all sorts of art, and I knew it was a smart decision not to spend a chapter trying to describe the physical characteristics of all of the different races, but when I go from such a rich, vividly rendered game where I can see exactly what the delicate, amphibious-looking Salarian looks like compared to the giant, craggy Krogan, I feel like I lose some of the charm of this existing world.

So, in my opinion- read the book! And, also play the game.

Cori is a Philly native, a devout travel-worshiper, and a devourer of books. She enjoys horseback riding, painting, and writing (her latest book “Half Breed”, can be found here) She has 2 adorkable shepherds, an equally silly but fantastic husband, a cranky hedgehog, an adorable guinea pig, but, sadly, no partridges in trees. There are ravens though.

Editor’s Note: an advanced reader copy was given to BGN in exchange for an honest review.