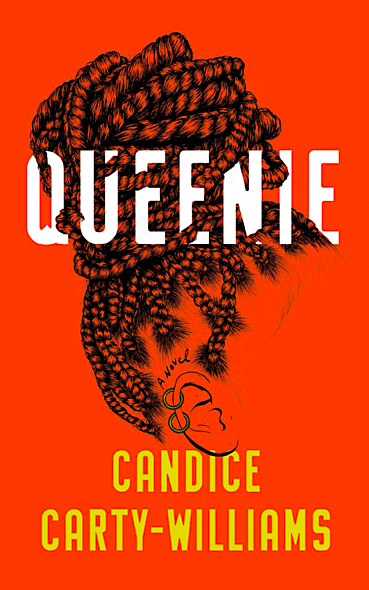 Are you the type of person who gives good advice and loses patience when friends ignore it and shoot themselves in the foot? If so, you’ll probably have a bone or two to pick with Queenie Jenkins.

And if you’re the friend who is hell-bent on ignoring every wise word she’s given, this may feel like the diary of a kindred spirit.

Queenie by Candice Carty-Williams is one of the highlights in beautiful Black book covers of 2019. The iconic braids were so popular upon its release that four colorful pop-art style variant covers were released internationally. Anyone that knows me is aware that I can never pass up a book featuring some gorgeous Black hairstyles. Whether that’s to my advantage or not remains to be seen…

Queenie is largely a story of the mental health journey of one Queenie Jenkins, following her break-up with her white boyfriend, her tumultuous dating (or rather, dicking) choices, and the fall-out of her career. Queenie is a 25-year-old woman trying to find a way to be valued and respected sexually, appreciated professionally, and supported socially. Carty-Williams takes us deep inside Queenie’s head as she navigates her various social relationships in a range of bizarre and sometimes downright unhealthy ways.

And we get some very graphic details about those relationships. If you are uninterested in reading about the intermingling of human bodies, I suggest you put this book down.

After Queenie is somewhat unknowingly dumped by her boyfriend Tom, she goes on a destructive dating binge, in which she finds herself having unpleasant (and often unwanted) sex with a series of guys ranging from Dick to Douche. As this series of poor life choices begins to take its toll on her psyche, Queenie starts slipping up at work and soon finds herself on the brink of losing her job, her friends, and her self-respect. Needless to say, her mental health is not exactly thriving, and her physical health soon follows suit. While on the decline, Queenie is battling between the idea seeking help and making better choices…or catering to her impulse for quick-fixes (usually in the form of quickies).

Reading from the perspective of a Black woman approaching her mid-twenties, I found Carty-Williams’s writing style was easy to fall into. Queenie’s voice is often fun and easy to read, especially when she’s conversing with other characters. The writing definitely captured the right generational tone without feeling like a condescending stereotype.

The author also has a particular talent for adding small but incredibly striking details that do a lot to illustrate a compelling backstory. There were many times where I almost wished I could read the story of the younger Queenie that is alluded to throughout this book. Carty-Williams’s portrayal of her upbringing and family relationships often felt like the most gripping part of the narrative.

Unfortunately, I wasn’t as captivated by present-day Queenie’s story as I was by her cover. While the narrative definitely did an excellent job of capturing the feeling of microaggressions that Black British women experience on the daily, especially in dating, the writing fell a little flat when trying to tie in larger themes relating to the Black Lives Matter movement. The story makes brief references to protests and murdered Black men, but then drops those threads just as quickly as it picked them up, refocusing itself back onto Queenie’s latest fling without offering up any coherent link between these details and our main narrative.

On the one hand, I immediately fell in step with the protagonist — a young Black woman in the early stages of her career, struggling amidst a sea of trustworthy and untrustworthy white faces, trying to determine which is which. Even as I found myself frustrated with her inability to properly value herself, Carty-Williams gives Queenie depth and humanity that I couldn’t help but sympathize within a lot of respects. This was largely a story about mental health and the unique struggles that Black women face in finding safe spaces to cope and heal. While I didn’t find the ending particularly satisfying, I felt a lot of the outcomes were largely realistic and true to the journey that the character was on.

Ultimately, I think whether or not you’ll enjoy this book comes down to how much you can identify with Queenie Jenkins. For some people out there, Queenie’s story will likely be highly relatable and the character easy to root for. For others, you’ll have to take a break every once in a while to roll your eyes to heaven and go: “Girl, what are you doing?”

Either way, read with patience.