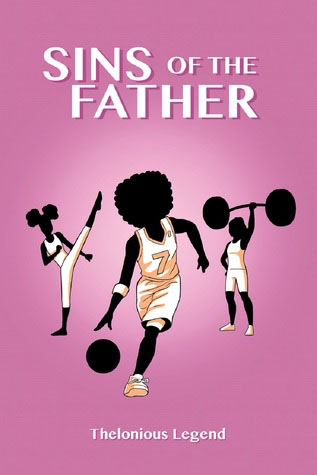 Sins of the Father (written by Thelonious Legend) is part of a trilogy of books based on the Parker sisters with extraordinary powers. As a book for middle school students, this brought great memories of reading books like The Babysitters Club, and Sweet Valley High.

This book is one step better because the characters are three sassy teenage Black girls. Gwen is super strong, and Eve is very fast. Ana, the youngest sister, has abnormal intelligence and soon becomes a millionaire through trading and patenting new ideas.

There are real laugh-out-loud moments in the book, and I found myself chuckling along as I read the smart-witted dialogue from the characters.

The title of the book originally had me thinking this was going to be a dark, sinister tale, but the name comes from the father allowing his best friend to inject him to increase his chance of having male children. He believes it doesn’t work, but as his daughters become young women, they soon find they are developing crazy strengths.

The sisters are intelligent, sporty, and wealthy. Highly aware of their privilege afforded by their parents and grandparents, they are trying to find their own identity and not live on the legacy of their famous grandmother.

I liked the way that Legend makes the characters check their privilege. For example, when one of the sisters wants her new boyfriend from the city to meet her family, her self-centeredness is put into check when she’s informed that her reality is not the same as others.

As an adult reader, I questioned aspects of the novel a little more–small details such as the mother always holding a glass of wine or sipping had me wondering if she was an alcoholic…lol

The characters don’t just exist in their teenage world, they mix between the adult world too and have the face the reality of growing up.

There were a few points in the novel that I felt were a little bit repetitive. The re-introduction of characters and backstories was a bit overdone, though I couldn’t remember if this was quite common to middle school books.

Overall, it was a great book to read and a hopefully a franchise of books that will keep young middle schoolers entertained.

Catrina Walters is from the UK, London and works abroad as a high school teacher, teaching film and design in Spain in a pursuit to improve her bad Spanish. She’s a serial traveler and has lived in Hong Kong and El Salvador (yes, murder central!). She binge watches TV shows, takes photographs, and blogs occasionally about her traveling adventures. Twitter: @GlobetrotCat Instagram: @Globetrottingcat