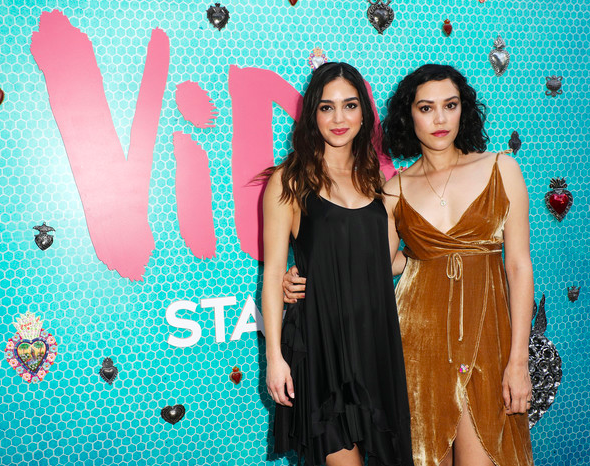 Melissa Barrera and Mishel Prada are enjoying their first success in a successful series and experiencing a bit of wokeness too.  Since it’s May debut, the Starz streaming series has received critical praise and high audience ratings. BGN met up with the actresses at the Television Critics Association (TCA) biannual summer press tour and the conversation went from one thing to another; the show’s acceptance in the Latin-American community, actors’ insecurities, Trump’s border policies and what’s this about inclusion?

BGN: Vida was announced at TCAs before it went on the air, in what ways do you think this kind of a show is a first?

Mishal Prada: Yeah, It’s hard to speak definitively but I would say if it’s not the first, it’s one of the few and there are too few for as big as the Latina community is in the United States and for as much as we go to movies and consume media. It is definitely one of those “very few” shows and it shouldn’t be the outline. I think we’re starting to see—with the reception of the show—that it shouldn’t be the one show or one of the shows when there are 400 shows on TV.

BGN: When you were cast, did either or both of you have that overall good feeling that this would be a hit, that ‘I just know it’ feeling?

Melissa Barrera: I had that feeling but I also have that about everything when I’m cast and so it doesn’t always work out but it did this time and I am glad. It’s very comforting to know that something that you put so much passion into and you hope—because the message is so important and because the representation that is happening is so important—you hope; that a lot of people get to see it and like obviously because that would mean seasons of it. It means more jobs and that, means more opportunities for the community and that in turn means that maybe other networks will look and be like ‘Oh, let’s have one on our network. Let’s have a Latina show on our network.’

So you hope that it would have a domino effect and only good things would fall but you never know. It’s like the stars lining up. You never know what is going to make a show work. Everything can be in the perfect place and everything can seem like it’s going to be the best show and then it’s not.

Mishel Prada: There were three shows I really wanted to be a part of, I read the pilots and saw the breakdowns come out; it was The Chi, Dietland and Vida. Those were the three shows. I originally went in for a smaller part, well it wasn’t a smaller part, it was just a different part. I went in for a different part and it felt really good and I leave the audition thinking, ‘I don’t know if I’m ever going to work again. Why am I an actor? I’m not even good!’

As I kept moving up in the chemistry reads then the director sessions,  I was having so much fun working with (casting director) Carmen Cuba and (writer/creator) Tanya Saracho, I felt so respected. I was on the short list. I’d never tested before. I’d never gone this far and then when I tested, I thought, ‘Oh, I’m going to get this.’ I’m going to be on this show! Then after I tested I went to sleep and it was like, ‘No, you’re not going to be on this show. I thought is that so dumb. Is this intuition? Then sure enough I didn’t get it and I was fighting with that.

Then a week later I got a call that the showrunner wanted to meet me. 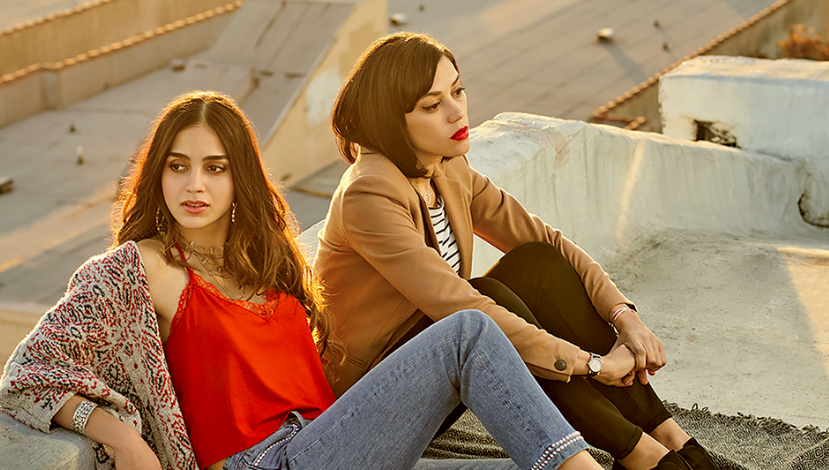 Melissa Barrera: You have to have that faith. A lot of people say to me when you walk out of an audition you have to let it go and I don’t feel that way. I want it. I pray for it and I light up all my [candles] and I go home and try to put it out into the universe. I do that for every role that I go out for and I feel like that’s the way, that’s the secret. That’s like calling things to you. To me, you have to want it to get it.

BGN: In the second season, are you going to touch on the whole Trump border scandal?

Misel Prada: Our show takes place in the present time so even in Season 1, we touch on it in passing. It’s really up to the writers how deep we’ll go but it is present times so nothing’s off the table.

And the truth in—in a lot of Latino communities—we don’t really always talk about it, unless it’s directly affecting our communities so whether it gets brought directly or semi-directly, will be true to life.

Melissa Barrera: Knowing Tanya (Saracho, writer/creator), it’s going to be in there one way or another. I know the writers are still writing. They’re breaking the season and they are still figuring out what is going to happen but they as a writer’s room have been so involved and so vocal about what is going on that it would seriously surprise me if it wasn’t in there.

BGN: How well has this show been received among Latin American viewers?

Melissa Barrera: It’s been good. We have the numbers and the numbers are good but I feel like the way we know it’s doing is through social media. We saw, even on Saturday nights, because they would release the episode at midnight and people would wait to watch it as soon as it was uploaded on the app. People would be talking about it online and that’s a good sign, people are waiting to see what’s next. That’s a tribute to our amazing writers and Tanya. It was also a short season and it came at a time within the year that was like a weird time to come out.

Melissa Barrera: May. Not a lot of shows debut in May. You either come out at the beginning of the year or you’re a summer show or in the fall but May was a weird time to come out where people are already hooked on other shows so it took awhile. It’s a good thing that we have a platform available where people are able to go in and watch them. So it took a while but that is why our series grew. It was kind of a word of mouth thing and that’s the best publicity that you can ask for.  Hopefully, for Season 2, we will get even more viewers and more people watching.

BGN: Mishel, you did an editorial for Stylecaster.com?

BGN: And what brought that on?

Mishel Prada: They’d asked me to write an editorial about representation. We talked about the lack of Latino representation in front of the camera, behind the camera and all that stuff and I really felt it was important to speak up for the critics of color. That was something that Brie Larson had brought to the forefront, and Frances McDormand, and it clicked. As a Latina actress and a person of color, I thought, ‘How did I miss this?’

So yeah, I think it wasn’t exactly what they were wanting or expecting but it was something that I felt was really important, just realizing that we really have to use our forum as actors because we really do have the power to say, ‘I do want to make sure that there are some critics of color. I don’t know how many junkets you go to but this is one of the more diverse ones and that is by design.

I think that is something that I had taken for granted because this is the only show that I’ve ever had, so it’s like,‘Oh, that’s how it is, it makes sense.’

It makes sense,’ but if you talk to someone and they said you’d be surprised by how many show, Latino shows or anything, they don’t even give the credentials to critics of color. I realized how important that was and I just wanted to take the opportunity to speak up about that and share how well the critics have received us and have been so wonderful and I think a part of it is showing because it’s for a lot of different people and not every reference is going to be for the dominant culture. Anyway, that was that. 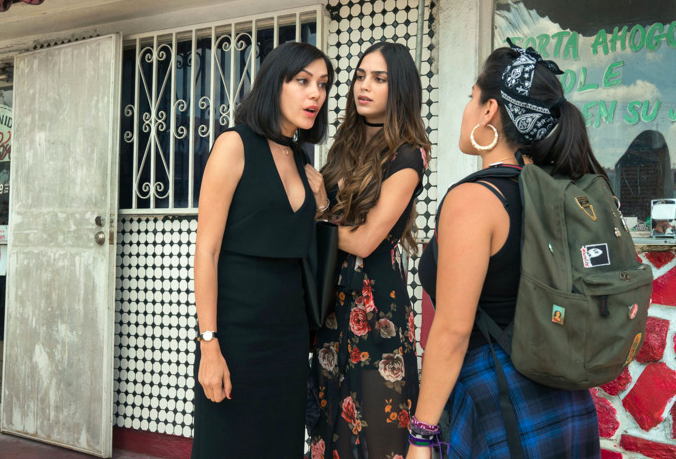 BGN: So what is it that each of you like about your characters?

Melissa Barrera: I love my character a lot. I feel like I am her, in a way. When you play someone you can get defensive, like on social media when I’m called a mean woman because of what Lynn was doing. I would feel like they were attacking me as a person because you connect. You become one person in a way.

I guess I justify her but I know that she is a very lovely human being. She wants love. She seeks love actively and she is a very open person. She will not judge anyone. If you tell her you are in love with a tree, she’ll be like, ‘Oh amazing, introduce me to the tree.’

You can see that side of her when Emma comes out to her and it’s not an issue. It really easy to focus on the negatives and not see the good things about people. So Lynn is a good person. She makes bad decisions but she is person who has a growing conscience and is growing and maturing and she has a lot of love to give.

Mishel Prada: What I love about Emma is that she was self-made. There was nobody that was going to tell her that she couldn’t do anything. If you tell her she can’t do anything, she’ll figure out a way to do it.

There is something so incredible about being unapologetic that way and we’re also seeing with her just the parts that need to be loved and hopefully, we can see a little bit more of that.

Diedre Johnson is an entertainment writer/editor in Los Angeles. She has been a nerd well…almost before it was a word.