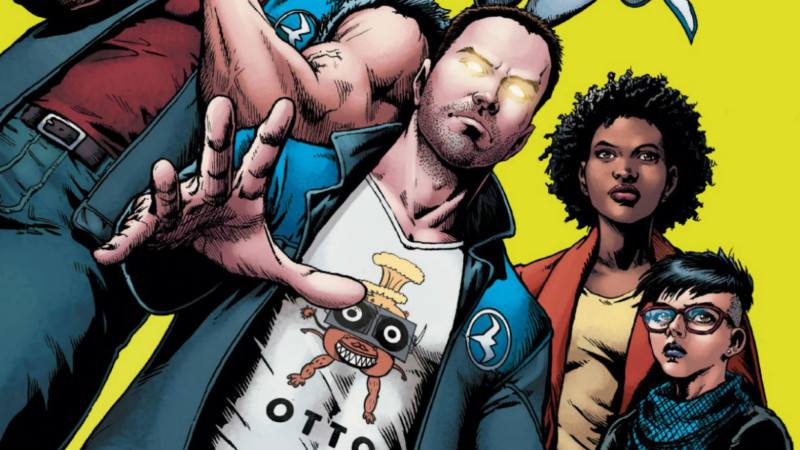 Valiant comics have brought their best superhero team back into the mix in Harbinger Renegade #1. The book takes place in a world following the original aftermath of the Renegades team.

Following the defeat of antagonist Toyo Harada and ending any ideas of his world domination via Psiots, the world is still in upheaval.

As the Renegades leaked Harada’s secret files, the identities of all potential Psiots have been revealed to the public. In turn, the world has been left in fear and chaos with most of the Renegades nowhere to be found.

Due to this, there has been an influx of characters who have been convincing other individuals that they have the ability and technology needed to unleash dormant powers, leading to deaths all over America. The most recent victim in the book was a young woman who was found with her head blown by the ‘conversion machine’ used by another Psiot.

It is these instances that have started to cause more fear amongst citizens and Faith, one of the original Renegades has been on a mission to help any of the people who’ve been affected. But she realizes this is not something that can be done alone, so she attempts to contact her former teammates to join her. As Faith aptly points out, none of this would be happening if they hadn’t leaked Harada’s documents in the first place.

Rafer Roberts beautifully summarizes the events of Harbinger to refresh the minds of readers who know the original story, but also manages to familiarize and new readers to what’s brought the Renegades to this point.

He also does a great job in moving between the past and current events with ease, never once losing the readers at any point.

As I did not follow the original Renegades comic book, I was unsure of what to expect when reading Harbinger Renegade #1, but I clearly didn’t have anything to fear. The book was exciting and detailed from start to finish and paired with the amazing artwork by Raul Allen; this comic is one you won’t want to miss.

The next issue of Harbinger Renegade is set to hit shelves on December 21st.