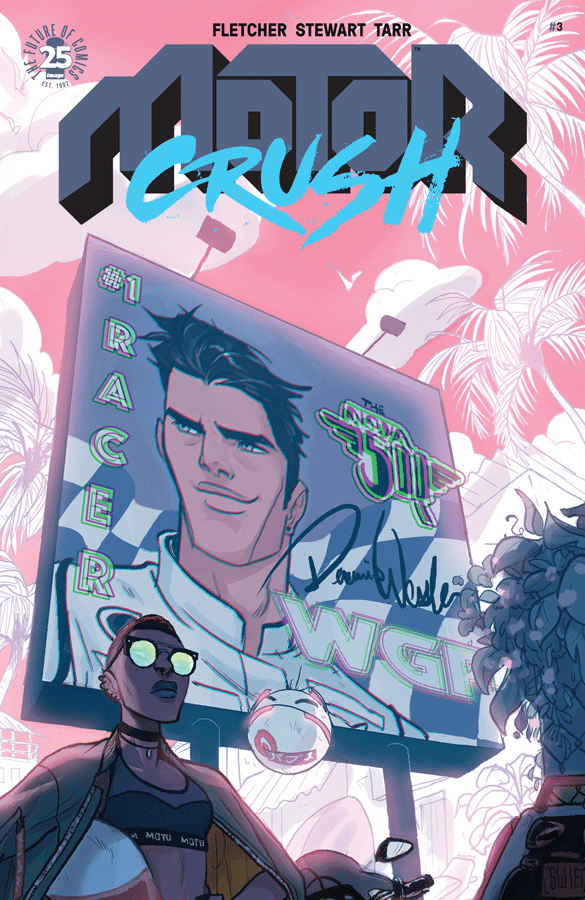 Last issue ended with Domino making a deal with the Producers of the Cannonball to get Lola off the hook for all the money she owed them. When has making a deal with an underground, criminal organization who isn’t afraid to kill people to send a message, ever gone wrong?

We see what might be the first fallout from Domino’s decision. She gets home after a night of practicing to find her dad’s garage trashed. The message is clear; if she loses this race, the Producers will own her and the garage. Lola isn’t pleased about Domino risking everything to provide help that Lola never asked for but she ends up agreeing to come back to team Swift.

There are two races in this issue–first up, an exhibition race for the World Grand Prix. We get to see Domino’s skills on a legal track. Judging by her competition, she still has work to do if she wants to be number 1. The second is another Cannonball – the flip side to the bright, orderly, and legally sponsored Grand Prix. These races are my favorite parts of this series. The Cannonball is like a better version of Fast and the Furious: Tokyo Drift populated by Mad Max extras. The aim is to win at any cost. At this point, Domino’s withdrawal is affecting her ability to race which makes her even more desperate to win the Cannonball’s Motor Crush prize. Unfortunately, as we’ve seen so far, things don’t go easy for our heroine.

Under all of that bravado, Domino is a woman racing against herself, her father’s legacy and everyone’s views of her. She has a lot on the line and her secrets distance her from the people who can help. The double life she’s living is crumbling around her. This issue ends on a cliffhanger that adds even more to her plate.

It’s only the third issue and I’m already fully immersed in the amazing world and the cast of strange and interesting characters Tarr, Fletcher, and Stewart have created. I’m probably going to say this at the end of every review: if you aren’t yet, you should be reading this title. As a bonus, check out this animated cover created by Brad Backofen: