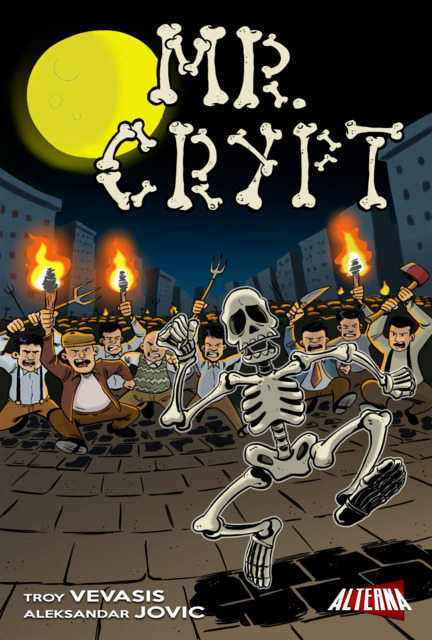 After a freak storm caused a bolt of lightning to strike the local graveyard, Mr. Crypt- a walking skeleton- was brought to life.  Having to find a dapper disguise comprised of a sports coat, top hat, and fake mustache, the friendly skeleton made his entrance into the world.

However, he was not always met with friendliness and was chased away on multiple occasions by scared city dwellers; bringing home the fact that people are consistently unaccepting of people or things that are different from them.

But ever the optimist, he’s hoping things will be different after receiving a gift from the mayor. It’s a well-deserved trip after vanquishing some vampires during his previous outing. But, of course, he can’t go wearing his top hat and coat. So, with a little help from his pet rat, he dawns a Hawaiian shirt and straw hat before departing.

Blinded by his excitement, he doesn’t realize until he’s arrived at the island that he and the captain are the only ones on the ship. Now, Mr. Crypt learns he’s been bamboozled; sent to an island too dangerous for others.

Unbeknownst to the mayor and Mr. Crypt, the captain ventured to this island to try and retrieve a golden skeleton from the locals. It’s a troublesome mission, but Mr. Crypt agrees to help search for the coveted idol.

The island shenanigans begin with a bang when hidden traps set by the locals create the need for Mr. Crypt to perform some daring rescues, which may result in some more chases. However, that’s something that the weak skeleton is all too familiar with.

This series is a lot of fun, and it’s an easy read. The style is reminiscent to the comic strips you’d read in newspapers that are typically comedic and have a few sarcastic one-liners. It’s similar in that sense, but the stories are obviously lengthier, but it still shares the same lightheartedness you’d find in a shorter comic strip.

Troy Vevasis does a great job of keeping Mr. Crypt emotional, despite the fact that he is a skeleton. This can be told when he is feeling unsure of himself, or by the sadness, he feels when he’s chased almost endlessly.

The artwork is neatly done and cartoonish.  Done by Aleksandar Jovic, it perfectly matches what Mr. Crypt is, which is: fun.

Mr. Crypt is published by Alterna Comics and is available digitally via Comixology.  Be sure to check it out for some laughs and entertainment, suitable for all ages.