I’m at a loss writing a review of the fifth Prophet volume, akin to being asked to write a review or recommendation of Alejandro Jodorowsky’s L’Incal series. What is there left for me to add to the discussion? That it’s the most ambitious, freewheeling, imaginative, mind-melting science fiction comic in recent memory? That its consideration and signal-boosting gusto for indie artists (especially in backups for individual issues) makes me optimistic for the future of the medium? Or that, if you disagree with me on its greatness, and genuinely find it entirely unpalatable or torpidly obtuse, that this is also, somehow, a valid summation and difficult to deny?

I’m starting to wonder if these questions sound off-puttingly vain or condescending or untethered; I don’t mean them to be. I am one of those people who has enormous affection and admiration for Jodorowsky while granting the notion that his comic work (and films, for that matter, but I digress) is not for everyone. Jodorowsky’s writing is rampant with narrative about-faces, bizarrely crude bouts of violence and sexual assault and petty acts of vengeance. His work employs classic story tropes alongside anarchic system-bucking, where the turn of a page can kill two long-standing characters and introduce four new ones, trundling ever onward. 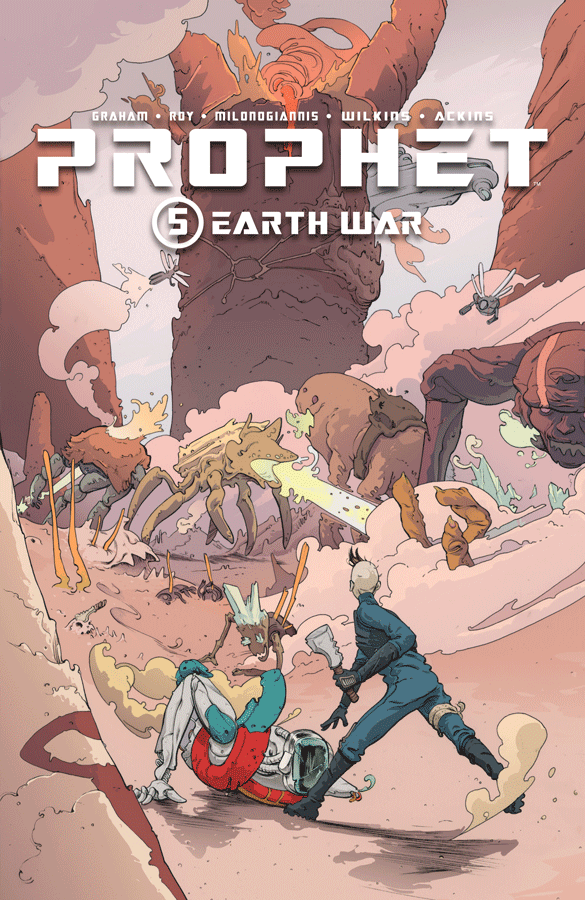 Prophet is less maximalist than Jodo’s work but maintains a dizzying sense of scale and possibility. The first time you’re dumped into its universe might require a convalescence, but once rested, you will probably return to it reenergized and better prepared for its treasures. You will find yourself somewhere entirely different than what you’re used to, teleported into nigh-repulsive glowing caverns dug into gigantic humanoid bodies, horrifically intricate insectile mounds, keeping pace with lumbering alien caravans. 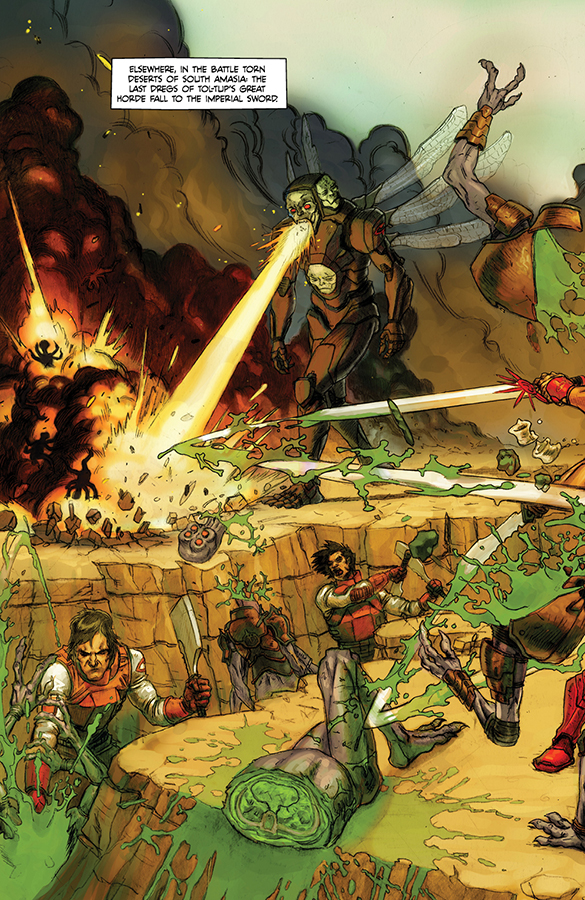 The sense of place is distinct when compared to other sci-fi, yet there are decided references to international genre masters like Jean Giraud, Enki Bilal, Juan Gimenez, Katsuhiro Otomo, and many others. Comics virtuosos Brandan Graham, Simon Roy, Giannis Milonogiannis, and Farel Dalrymple are driving this acid-soaked bus, all of whom are forward-thinking trendsetters with roots in the indie comics world, and nothing about their work on Prophet seems the least bit compromised. These are creators whose talents have been practically weaponized here and completely let loose in the candy store.

Prophet: Earth War is the final volume in the series and drives to a fitting, disintegrating conclusion. Its characters are so painstakingly detailed (yet often feel somewhat unknowable), even though their grand designs and purposes are there. Jonathan Prophet, Lord of the Wolf-Rayet Star, is the anchoring force here and continues to guide the plot, and his collaboration with other named Prophets and a motley crew of robots and non-humans enact a last-stand battle against the brain-mother overlords. 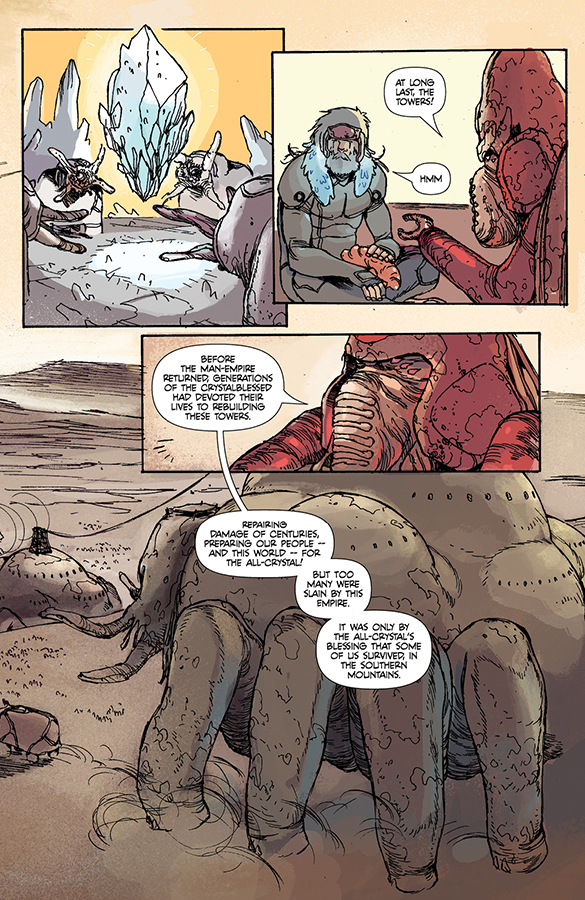 This story is about large, drastic, sobering concepts of control. It is about the rejection of militaristic conquest, a guerilla rebellion against total domination and genocide, the few against the inconceivable many, the dismantling of the ignorant machinery of war by its once ignorant participants. It celebrates love and diversity, rejects the grotesqueries of ethnic cleansing. It’s about creatures (and clones) going against their natural programming, introspection leading to intervention, finding compassion by learning of other cultures. In short, it is about alien assassins with organic technology, psychic projections that are unto gods, but also community.

I would all but insist that reading the series from the first arc is a requirement, yet the writing is so broad — almost biblically bombastic — that entering the tale mid-stream and struggling to follow along would provide its own uniquely meaningful and emotional rush.

Prophet is poetically constructed, sometimes difficult to keep pace with but absorbingly resonant, a series of circular laps between galactic drama and the deeply personal. On the humble spaceship crucible that evolves (literally) throughout the series, there are recognizable elements of space opera, space western, and some chewy interpersonal relationships, but the writer’s camera zooms wildly, throwing the largesse of a universe mostly just hinted at into tactile relief. 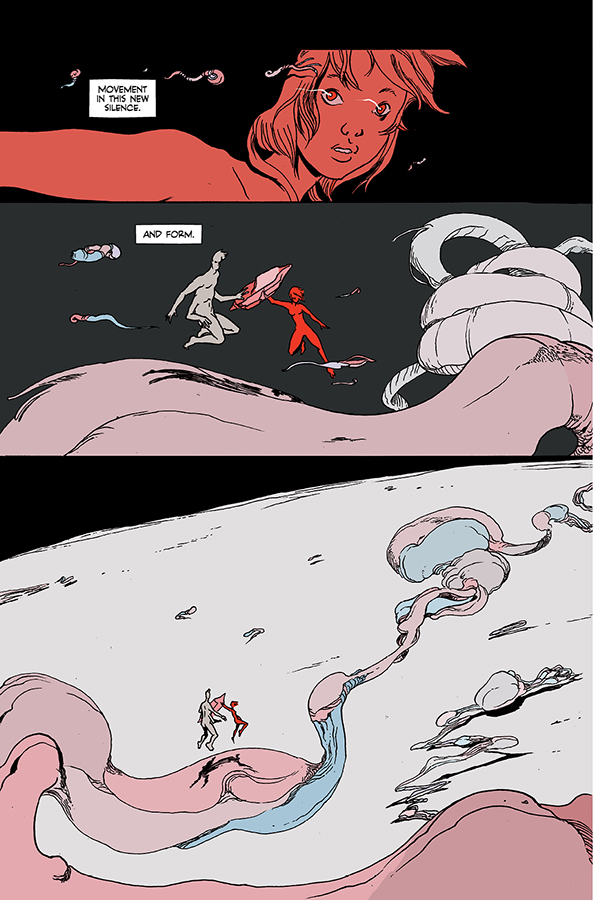 Earth War might also be the least elaborate and most conventionally satisfying of the Prophet arcs because it succeeds in its thrust to meaningful closure. The sometimes nebulous narrative rhythms I describe above are more refined here; the writers and artists have very recognizable goalposts in mind, ones where journeys and rewards are identifiable. There is significant momentum and drama. Familiar characters die, hallowed sacrifices endure, great evils are bested. I think the good guys win.

Prophet’s prose occupies the dream-addled idea space at the crossroads of the Old Testament, Amos Tutuola, and Frank Herbert’s Dune. The imagery, a swirling ayahuasca maelstrom of pulsing color and musical surreality, guides you through frontiers that are significantly rare in American comics, bilious and beautiful and disturbing. This collection positions some mighty talents to this effect, including series mainstays like Simon Roy & co., but also sneaks in James Stokoe, Aaron Conley, and other contemporary talents, none of whom seem shoehorned-in or unusually favored. Rob Liefeld himself even makes a brief appearance, with what I imagine is a measure of pride, alongside these creators who have supercharged his primordial 90s work into a modern-day masterpiece.

There is very, very little in American comics that can be immediately compared to Prophet, but the magnitude of this series will no doubt inspire some new creators to follow its footprints. And I cannot wait to read what comes.