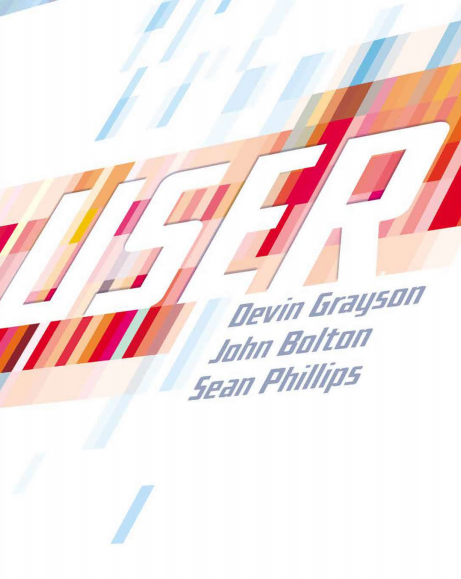 There’s a moment in User where protagonist Megan is pointing a gun at a man who, by all accounts, seems like an opportunistic predator worthy of annihilation. Insinuating himself into her fractured family, Cal’s character is always making coded sexual-predator gestures, invading a young teen’s physical space, and possibly molesting her off-screen. This means that the reader spends most of the comic waiting for someone to kick the shit out of him, and when Meg is holding a shotgun, you assume the payoff is coming.

But Devin Grayson has much stranger and less predictable targets in her comic, originally a three-issue miniseries published under DC’s Vertigo imprint, now being released in an expanded hardcover from Image. Functioning both as a remarkable artifact from the early multiplayer video game era and an exploration of internet-age identity and sexuality, it’s a more compelling and timely read than I would’ve predicted from the back matter or synopsis. It’s also defiantly pronounced as a story penned by a woman, for reasons which I’ll try and go over below (to the best of my challenged ability). 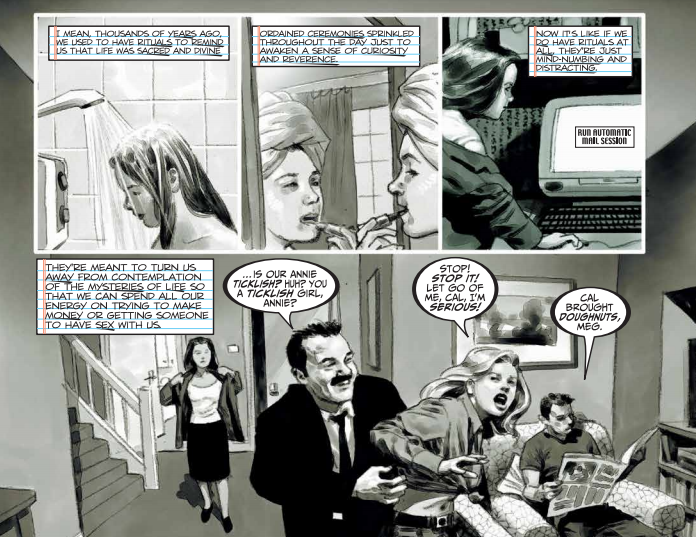 We’re introduced to Meg (or Meggie, or Megan, alternating nicknames which have creative echoes in their usage here) in a strange moment of strife, with her mother abandoning her family for dramatic but unexplained reasons. Her sister Annie goes to school, usually driven over by family creepo-friend and possible rapist Cal, while Dad hovers as a busy but invisible, distracted, ignorant presence. Meg has a rather involved administrative office job, and we learn about her internal insecurities through captions designed as journal entries. All this is prelude to a happenstance where she creates an online account in a collection of fantasy chat rooms (somewhat similar to a MUD or Multi-User Dungeon, which was essentially a primitive, early-stage, text-only form of MMORPG that very young readers are scrunching their eyebrows about right now) and begins to explore a virtual RPG as valiant, honorable knight newb Sir Guilliame.

As the narrative focus swaps between her “mun” (short for one’s mundane, “real” life, a phrase which I had never personally run into before) and her virtual world, Sean Phillips and John Bolton swap art duties, respectively. The effect is drastic but successful overall, with Bolton’s warlocks and paladins reminiscent of some of the best years of Magic: The Gathering artwork, all chunky armor, and exaggerated faces. Phillips’ mun material is equally powerful, but somehow a little more distracting, in the sense that the world seems to be established in the early 2000s, but everything on his pages seems a little noir, a little early-20th Century America. I think that’s possibly an unintentional aspect of his style, for which he would later achieve much renown during his ongoing creative partnership with Ed Brubaker in telling noir-inspired tales to this day. Still, Phillips’ art is wonderful; it just seems ever-so-slightly off from the writer’s intent. 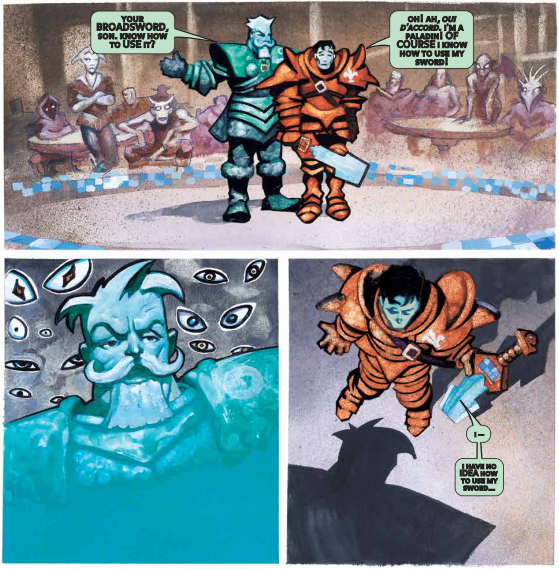 Let me reiterate that the virtual world in User is by no means an established, well-delineated World of Warcraft version of gaming. Consider it, instead, as an expansive series of chat rooms, all full of individual online users, committed to maintaining a shared integrity to the fantasy. After creating her user identity, Meg is quickly introduced to fantastical archetypal characters – all of whom are fellow loquacious roleplayers like herself, albeit much more experienced ones – and discovers that her rapidly evolving fictional persona is a happier, prouder, more committed one than that of her waking life. Sir Gil is specifically a gender-bent, culture-bent (he is French and speaks in French idioms) identity based on her idealized chivalrous ego-construction, and he becomes fast friends with the movers and shakers of the realm of Vhydon, individuals who gently guide and support her towards this new commitment. These interactions are some of the most compelling moments in User to me, especially when the other players she meets routinely break roleplay to coach her on the ins and outs, placing these discussions in double-parenthetical private whispers. This form of fantasy-encouragement further inures her into their intrigues, cementing her responsibilities to Vhydon at the peril of her mun. More meaningfully, these exposures to the people behind the identities solidify their presences, in a cyclical relationship between fiction and truth that builds towards a suitable crescendo.

I did not expect that Grayson’s story would be as moving or significant in 2017 as it was at the time of publishing, but that was proven wrong; its dependence on the intersection of multiple forms of sexual, gender, power, and escapist identities complicates its conclusions in incredibly satisfying ways. Furthermore, the stereotypes it shines a spotlight on or indulges in are eerily resonant even today, and while this makes certain plot developments somewhat predictable, it feels less like a relic of the wild-west days of internet gaming than one might suspect. In a sense, it’s the superior predecessor to Ready Player One, but replaces that novel’s reliance on pop-culture to foment its emotional center with, well, genuinely confusing but immensely relatable emotions. Meg is a flawed character who evolves into an agent of change in both versions of her world, yet never regresses into unreliable narrator tropes, and her journey is messily inspiring and often poignant. 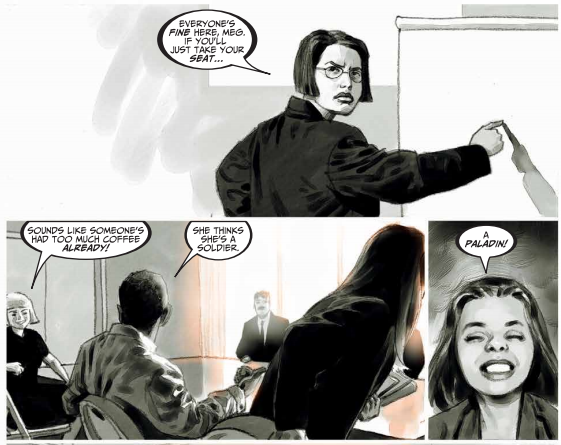 You don’t have to take my word for it, as the new reprint boasts strong recommendations from best-selling modern scribes like Brian K. Vaughan and Kieron Gillen on the back cover. As someone who was fairly savvy to Vertigo’s output, I’m ashamed to state that I had entirely missed this miniseries the first time through and am therefore thankful that Image saw fit to reproduce it in such an attractive volume. In addition to the comic itself, the hardcover edition gives you 20 pages that clue you into Bolton & Phillips’ process, but we don’t get any new reflections from Grayson herself; I would’ve loved to learn more about her reasons for telling this story, or what she thinks of it now. User comes highly recommended and will be of marked interest to any one of us who’ve ever rolled dice for hit-chance in a chat room.