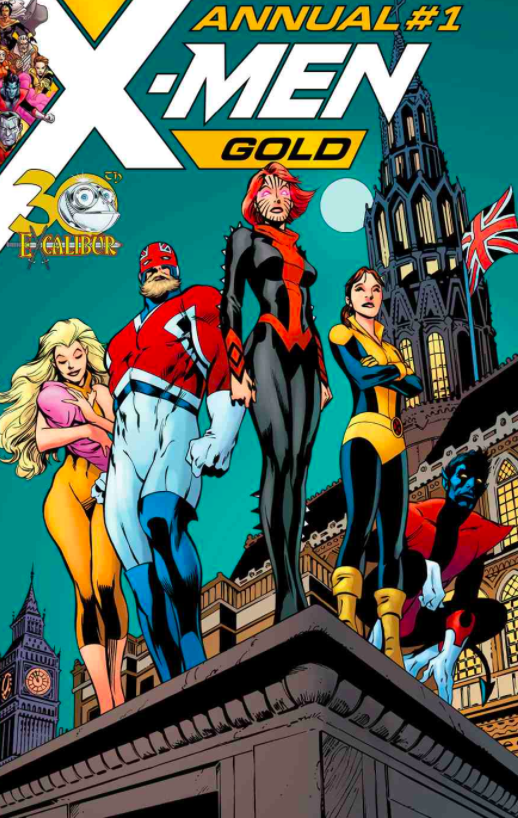 When I saw the press release for X-Men Gold #1 issued by Marvel and glanced at that cover art I knew I had to get my hands on this comic book.  Let me explain—the superhero team Excalibur, was my gateway into comics.  My very first issue was Excalibur Special Edition (1987).  Can I be completely honest and candid with you as to what piqued my interest about this particular cover? I loved seeing women centered in the foreground both as heroes and villains in this book.  I immediately picked it up and I fell in love.  The Excalibur series debuted in 1987 and was conceptualized by writer Chris Claremont and artist Alan Davis.

The first Excalibur team included Nightcrawler (Kurt Wagner), Phoenix (Rachel Summers), Shadowcat (Kitty Pryde), Brian Braddock (Captain Britain), and Meggan. A cute pet dragon of Kitty’s, called Lockheed, was an honorary member of the group. The robot Widget, who is featured on the back cover of the 1st edition issue, was later involved in a series of escapades with the band of superheroes.

X-Men Gold #1 pays homage to the Excalibur #1 cover by Alan Davis and has many of us Excalibur fans in the feels. Check out both covers below: 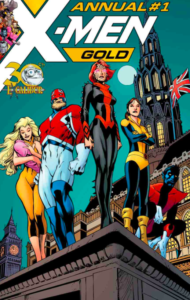 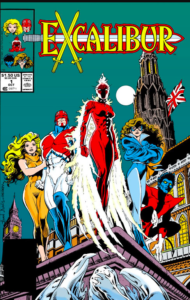 In the latest issue which available January 10, the X-Men head out to the United Kingdom to visit Meggan and Brian Braddock who just had a baby.  They were notified by way of a stork of course, and the reunion between X-Men members Nightcrawler, Shadowcat and Rachel Grey (she’s no longer Rachel Summers) is finally happening.  When we meet the Braddocks, Brian noticeably has a mountain man beard and Meggan—well she’s still Meggan, just as ditzy and as naive as ever.  However, Meggan does feel discouraged that her newborn daughter Maggie, who is growing exponentially faster than most babies her age, will not need her mother for very long during her formative years since she’s incredibly articulate at just three months and knows more than her own mother.  Remember, Meggan was illiterate and didn’t learn to read until adulthood—she also has never learned to write very well. 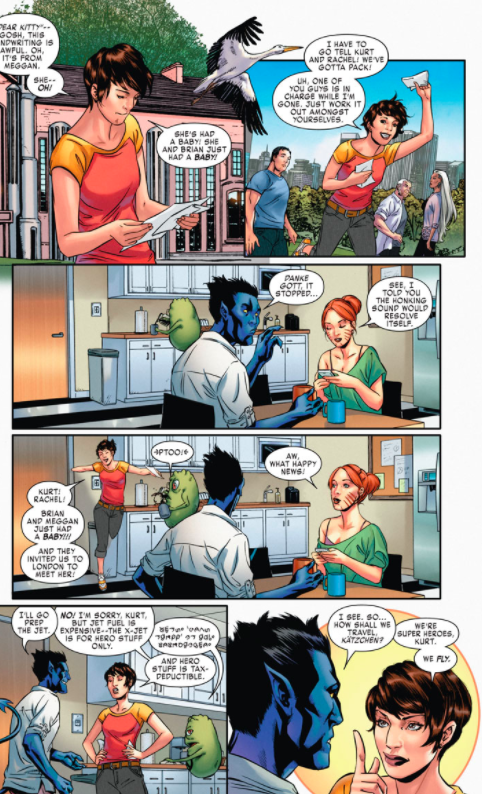 The book takes us through an unexpected turn of events, and we get to see old foes from the past appear as adversaries in this reunion story.  There are some interesting moments too between Nightcrawler and Maggie.  I couldn’t help but think about some of the older issues of Excalibur when Kurt had a thing for Meggan and there was a bit of a love triangle happening between Meggan, Kurt, and Brian.  Although a romance never officially evolved from Kurt and Meggan, I always felt like Meggan missed her opportunity with choosing Brian over Kurt.  I don’t want to spoil the events of the book in this issue too much, but Brian being as irresponsible as ever still remains the same with this dude.  I just hope Maggie as intelligent as she is can remain safe around her father who doesn’t have much common sense and her mother who’s childlike and perpetually trusting behavior puts her in danger at times.

Overall this book was a great read for me as an Excalibur fan.  My only criticism was some missing key characters in this book.  Again, I’m trying to keep this spoiler-free but I would have liked to have seen all of my Excalibur friends in this issue to make it a true reunion.  But perhaps that can be left for future issues.  We’ll see.