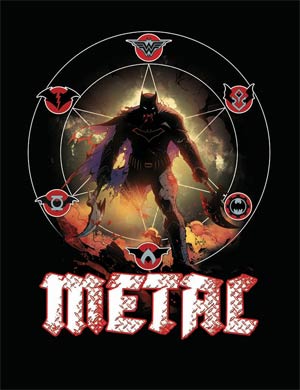 It’s almost the eve of DC Comics major crossover event Dark Nights: METAL. This series is not only a reunion of the fan favorite bat team Scott Snyder and Greg Capullo, but it’s also a company wide event crossing over to various books and several one shots.

Here is what Scott and Greg had to share about the event:

“METAL is a story that touches on some of my favorite DC stories past and present, and connects deeply to the run Greg and I did on Batman. It pushes the characters to their very limits, and takes us into realms that are completely new and unexplored in the DCU. It’s Kirby meets Frazetta with a dash of heavy metal thrown in. It’s METAL, and I hope you love it as much as both Greg and I do. Thank you.” — SCOTT SNYDER

“I’m looking forward to rock’n and roll’n together again. Fans have been loud and clear; they want more from us. We’re primed and ready to blow it up.” — GREG CAPULLO

BGN is psyched for this event and our review of issue one is pending. Today a major guest star of the series made its way to the internet! It’s an exciting reveal, and let’s just say it is a dream character.

So join us here on Wednesday for more on METAL. And while you’re waiting, hop on over to Spotify and follow Scott’s DC: METAL playlist HERE