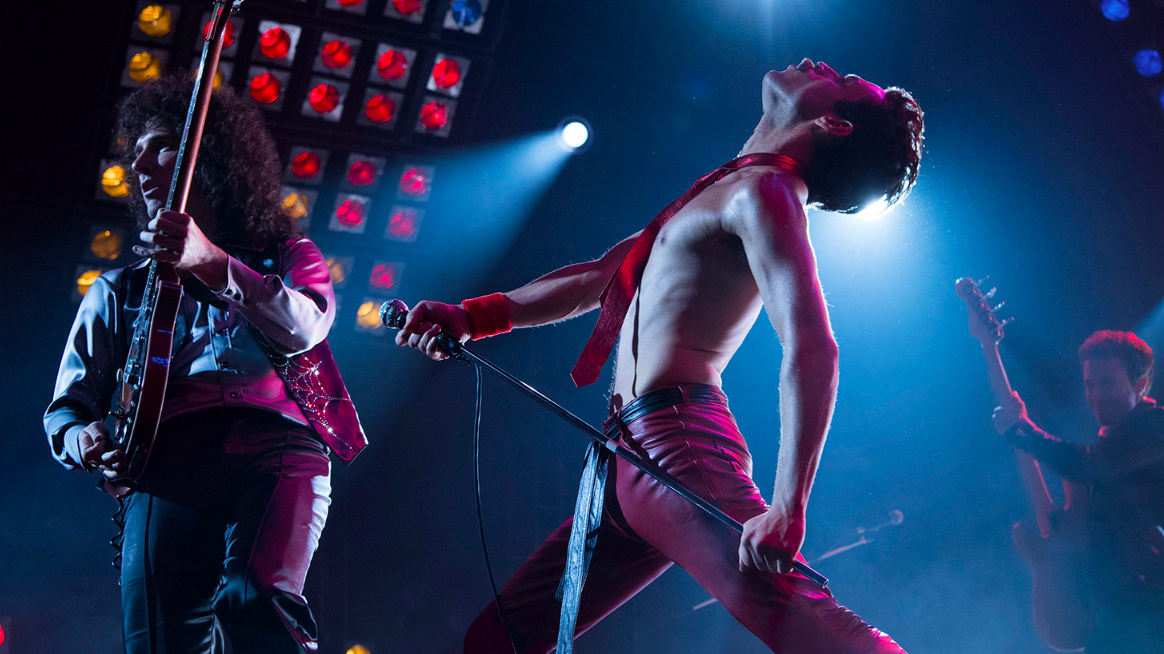 The biopic Bohemian Rhapsody is loosely based on the life of glam rock artist Freddie Mercury and the renowned band Queen.  The movie musical directed by Bryan Singer — a filmmaker with a problematic past and still gets work in Hollywood — is a story that ultimately focuses more on the life of Freddie than his bandmates. It should be noted that Singer left the production of Bohemian Rhapsody shortly after 3 months of principal photography. He was later fired on December 2017, with only 2 weeks of filming left to be completed.  Director Dexter Fletcher replaced Singer, however, due to DGA regulations, Singer remains credited as director.

Bohemian Rhapsody at its opening immediately alerts you right away that this will be Freddie’s story.  Extreme close-up jump cuts of Freddie Mercury’s (Rami Malek) jawline and famed aviator sunglasses tells us exactly who we should be paying attention to. These images are intercut with footage of Queen’s groundbreaking performance at Live Aid concert in 1985 — a pinnacle moment for the band’s career.

The story opens up with Freddie who’s a bit meek in appearance and unusually dressed in casual clothing hanging out at a local bar in London with an interest to sing lead for a band who conveniently are in need of a new singer. He meets lead guitarist Brian May (Gwylim Lee) drummer Roger Taylor (Ben Hardy) bass guitarist John Deacon (Joseph Mazzello). With his supernatural charm, wide-toothed smile and striking vocal range, he convinces the strangers to sing lead for their band.

It is Freddie Mercury that brings this band to heights they’ve never experienced before. 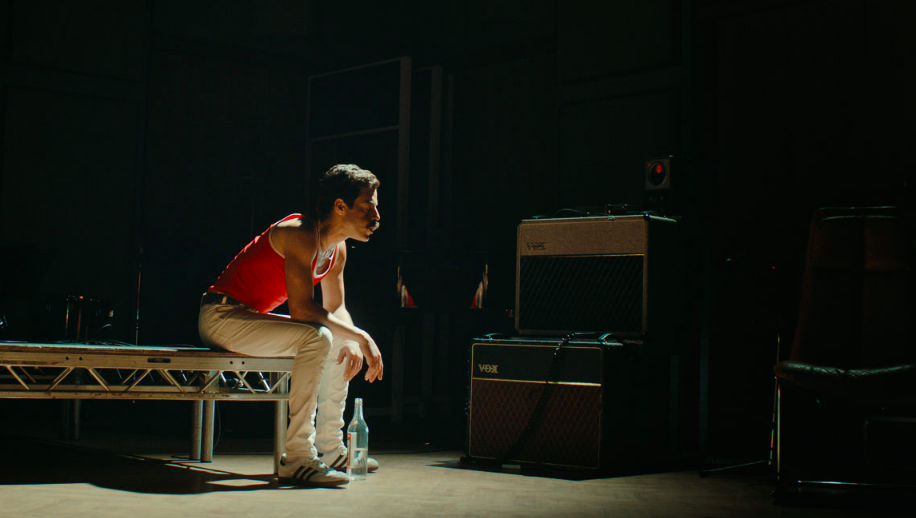 Freddie Mercury’s Denial Of His Heritage

The story brushes up a bit on Freddie’s family history. He is of Parsi descent and came from Zanzibar (now known as Tanzania). His immigrant family lived in India and later moved to England. In the film, Freddie didn’t seem too keen on revealing much of his heritage and even deceived his bandmates into believing he was from London.  Freddie’s birth name is Farrokh Bulsara which he later changed. When his father is concerned that he changed his name, his mother chimes in and says “it’s only a stage name all rock stars do that”.

However, Freddie had his name changed legally. There are bizarre parallels touched throughout the story between Freddie Mercury’s racial background and the incessant need to cover it up. The film sadly doesn’t add any exposition here on his motives and why he’s so ashamed of his heritage which left a big question mark for me as to what was historically accurate and what was fictional. We do see Freddie’s love and affinity for cats (he was the owner of several) in his flat in England. And Freddie was indeed a cat lover. 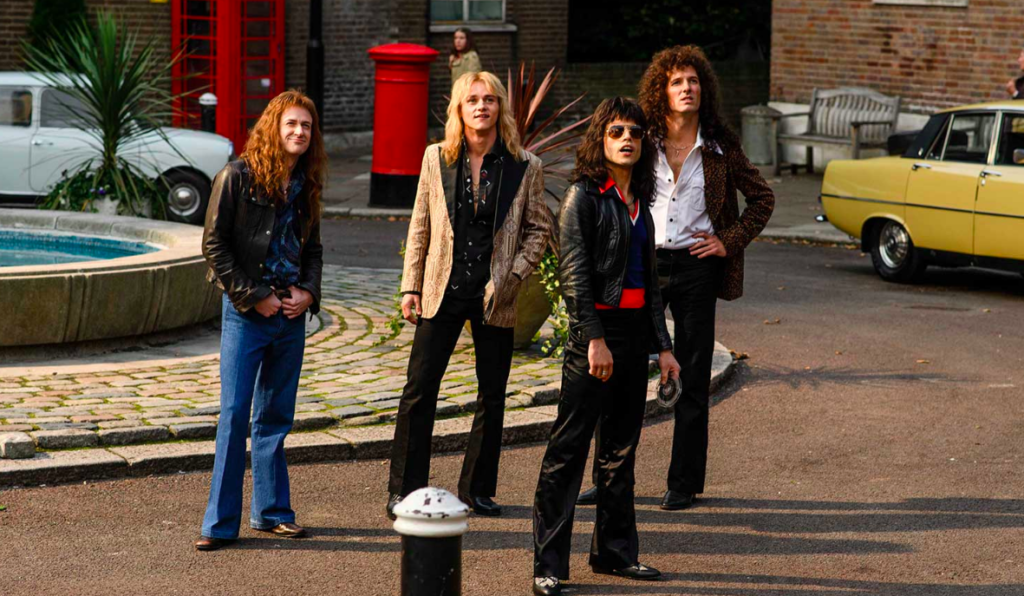 Fact v. Fiction In This Movie

I’ll be honest, going in and seeing Bohemian Rhapsody, I had a pretty shallow perspective about the history of Queen and Freddie Mercury.  I know of the band, but I don’t know details about the height of their success. After speaking with a fellow film critic colleague of mine and doing some digging online, various scenes are inaccurate. In my opinion, one of the biggest tragedies is watching a biopic that completely gets a historical account wrong.

One example is when Freddie Mercury reveals to his bandmates shortly before the Live Aid concert in 1985, that he has AIDS. Yes, Freddie Mercury did contract the AIDS virus which led to his death in 1991, however, he didn’t inform his bandmates about his illness until 1989. Then there is the depiction of assistant Paul Prenter (Allen Leech) as the villain responsible for being the nasty thorn in Queen’s side. Although there was some friction between Prenter (who later became Freddie’s manager) and the band, he wasn’t entirely responsible for the discord among the group. 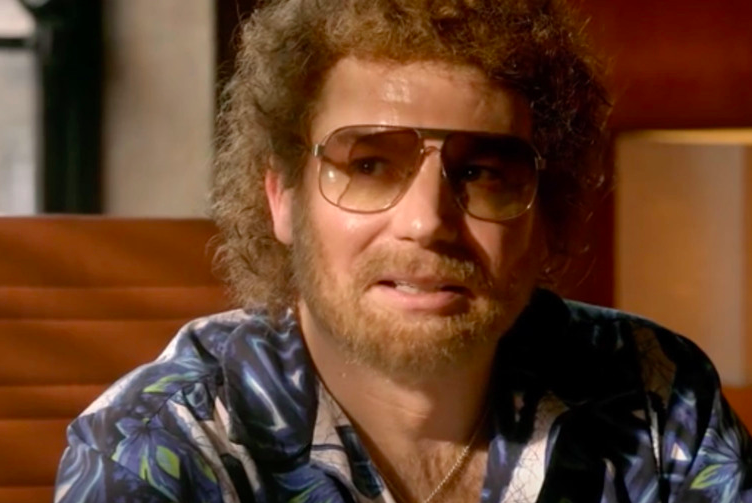 Aside from the fictionalized accounts, it wasn’t enough for me to tear this movie apart. One of the best scenes in the film featured EMI record executive Ray Foster (Mike Myers).  He’s also a made-up character for the film. In the scene, Foster argues fiercely with Freddie over the song “Bohemian Rhapsody”. Foster doesn’t like the operatic vocals nor the length of the song. It’s one of the best scenes for Malek as well who illustrates beautifully the audaciousness and sassiness of Freddie Mercury. Freddie’s bitchy-like quality permeates through the screen and it’s one of those moments that everyone will remember and quote from as well.

Only Freddie Mercury would say a fabulous line like: “I pity your wife if you think six minutes is forever”

Mike Myers in a scene arguing about the credibility of “Bohemian Rhapsody” was ironic!  I’m certain his character Wayne Campbell from Wayne’s World would completely disagree about Ray Foster’s opinions of the song. 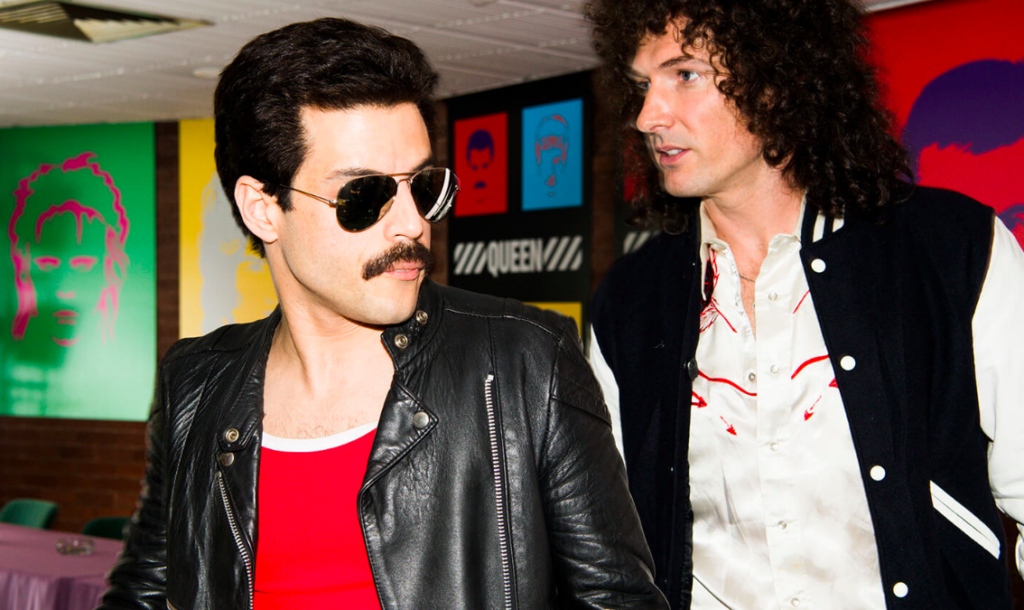 Rami Malek Delivers The Best Performance Of His Career

Rami Malek, drenched with charisma and sex appeal embodied Freddie Mercury in Bohemian Rhapsody. He didn’t portray him nor imitate him. He was him. This is by far Rami Malek’s strongest performance of his career and buzz about this role during awards season will not surprise me. Malek did everything from capturing his vocals (Rami’s vocals were mixed in with Freddie’s) to encapsulating idiosyncrasies like Freddie pursing his lips over his overbite. It’s very noticeable if you’ve ever watched Freddie Mercury’s interviews.

You can’t take your eyes off Malek when he graces each scene. This movie belongs solely to him and his engrossing depiction was remarkable.

The film, of course, plays many of Queen’s major hits throughout, so you may find yourself singing along and clapping your hands to the beats. The epic 1985 Live Aid performance (which if you have never seen it, go to YouTube) was incredibly compelling to watch and experience.

Special thanks to Cinema Cafe for this presentation. Bohemian Rhapsody is currently in theaters nationwide.