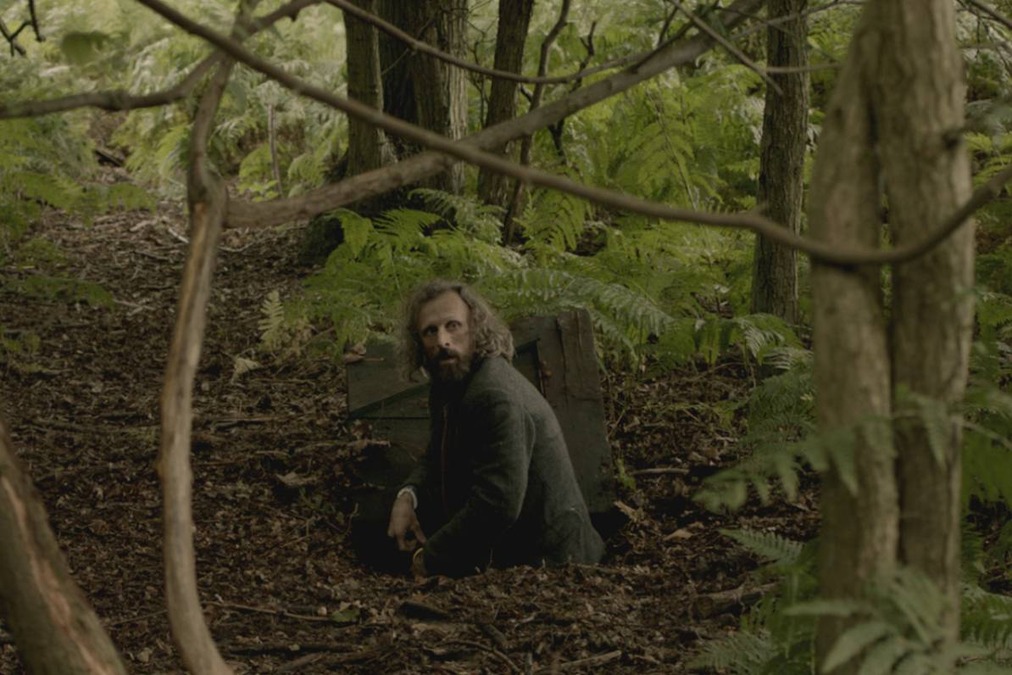 Halloween is right around the corner and, for some of us, it means binging on our favorite horror movies. There are old-school classics like Friday the 13th and recent films like It. Then there are cinematic oddities like the 2014 Danish film Borgman.

Dutch filmmaker Alex van Warmerdam’s deeply dark adult fairy tale leaves you with a pit in your stomach. Raw and malevolent, the film explores the essence of evil, introducing characters that could be evil spirits, the devil, or simply the wild imaginations of a person slowing slipping into insanity.

The antagonist of the film, Camiel (Jan Bijvoet), is a hawkish, bearded vagabond who lives in a subterranean hovel in a dank Danish forest. Several of his comrades also live in these earthen burrows and look to him as their leader. Driven from their lair by a gun-wielding priest and his spear-carrying associates, Camiel and his people scattered themselves through the forest promising to check in with each other on their cell phones. Camiel, armed with a small bag of his belongings and disheveled appearance sets off to find civilization. He descends on an affluent suburban area and inserts himself into the lives of an unassuming family.

Camiel begins his introduction to civilization by knocking on the doors of wealthy houses and asking if he can have a bath. After having the first house deny him entry, he knocks on the door of a young couple; Richard (Jeroen Perceval) and Marina (Hadewych Minis). Richard answers the door and briskly turns Camiel away. Unlike the other houses where Camiel moved on to after being denied entry, he decides to knock again, and introduces himself to Richards as Anton. He claims to know Richard’s wife, and after it is revealed that Marina does not know him, Richard almost beats Camiel to death. Feeling guilty for the way her husband behaved, Marina secretly invites Camiel to shower, eat, and recuperate in their shed. This is when Camiel begins behaving in a way that suggests he isn’t exactly what he appears to be; he’s more than a manipulative vagrant, but rather something else entirely.

Marina suspects that Camiel might be dangerous, but soon falls victim to his charisma. His effect on her and Richard’s three sullen preteen children (think Children of the Corn) is hypnotic, and it’s not long before he is sneaking into their bedrooms to tell unusual and morbid bedtime stories. As he embeds himself further and further into their lives, Richard and Marina’s marriage begins to fall apart. Tormented by violent dreams, Marina seeks comfort from Camiel, and it’s not long before resentment builds in her and Richard’s relationship. As the couple’s sanity is tested, Camiel brings his vagabond friends to assist him in his conspiracies against the family.

Potions, large otherworldly Irish hounds, mind control, corpses with their heads encased in cement, and machinations that take place over cell phones; Borgman is part fable, part horror, part social commentary. Classism, xenophobia, racism, domestic violence, and mysterious back scars serve as the foundation of the film which, much like Black Mirror and the Twilight Zone, takes an artsy and surreal approach to exploring evil.

With sleight-of-hand narrative exploration and drawn out scenes without dialogue, the film can be both intriguing and painful to watch. The gore factor of this film is minimal and is relegated to the unsettling dreams experienced by Marina. Violence is at a minimum as well, though when it does occur, it is realistic (at one point a person is choked to death for a rather long time with a tie). There are no good-guys-versus-bad-guys in Borgman, and the climax follows the formula of Stranger Things, with the audience having to make up its own mind on what transpired at the end of the film. As a psychological drama, Borgman feels somewhat strained and is plagued with some cliches (the bored and lonely housewife). However, the film does provide a sense of realism that makes it horrifying and terrifying to watch.