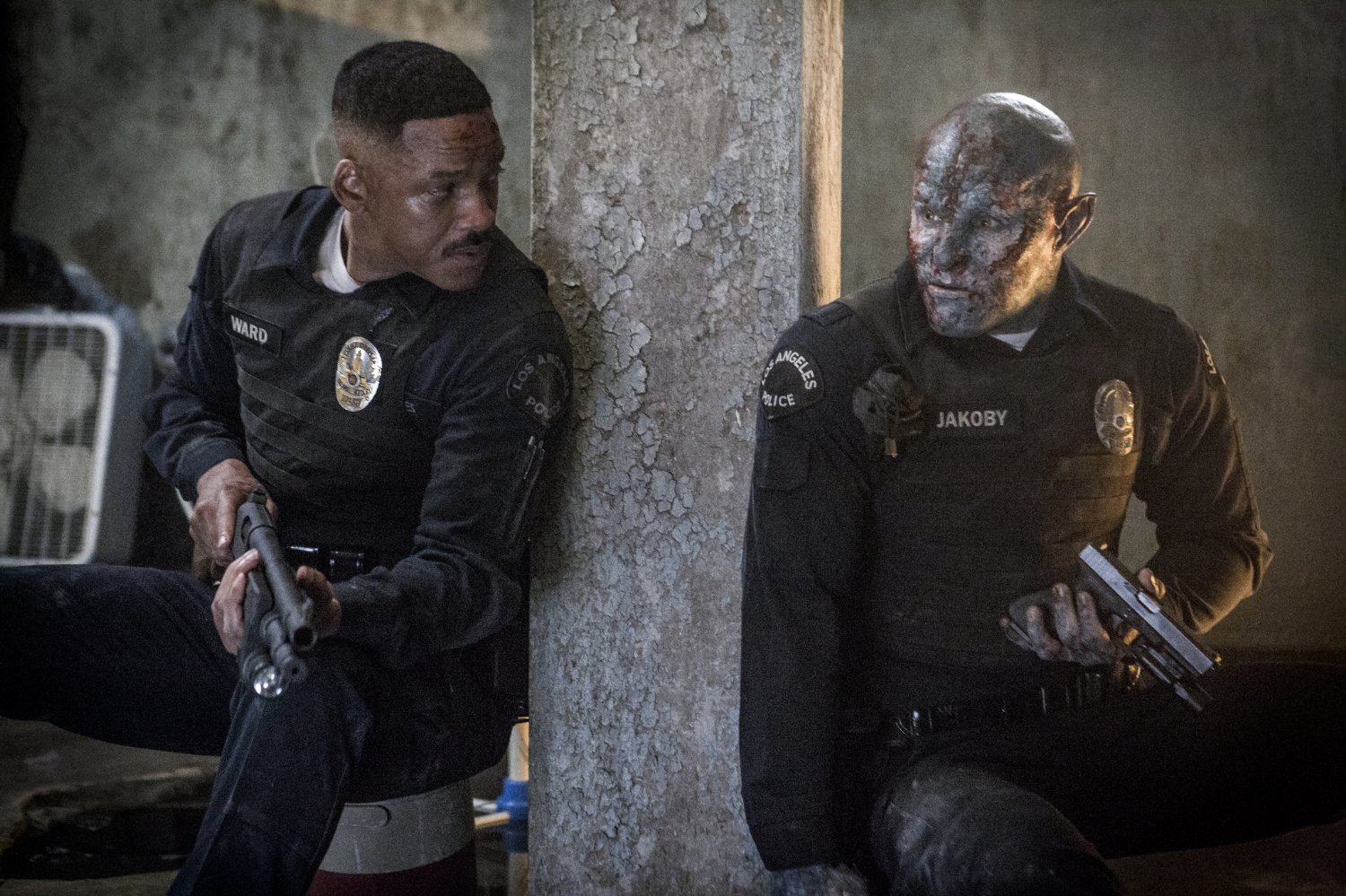 Generally speaking, I enjoy genre mashups, even when they stumble. Smush together the ideas, freestyle in the kitchen a bit with what’s already in the fridge. Make a big funky midnight snack out of a story. My housecats have always been strays, and I’ve never minded taking a risk on what’s meowing hungry in the alley around the corner. I like scrappy films, I like the danger of a rare combo, and I can appreciate what a film is trying to do even if the end result turns out a mess. The experiment is usually valuable enough.

Bright is making me doubt these sentiments. Because experimentation need not lead into crass generalizations, into meaningless set-pieces that grasp awkwardly for weight. The thing about the friction between the haves and have-nots is that none of it is really magical; class and social strata as we understand them represents a living, understandable organism with a comprehensive history, a path that can be traced through industrialism, slavery, racism, nationalism, imperialism, capitalism. Immigration, opportunism. Terrorism. Push and pull.

So when a magical MacGuffin wand appears, squirreled away in a leather satchel and threatening to turn the city of Los Angeles into a war zone between rival gangs of different species like the a video game crossroads of Shadow of Mordor, Player Unknown’s Battlegrounds, and GTA: San Andreas, I’m bombarded with questions. Where did the elves come from, and when? Who occupies their working classes, and have they ever revolted? If you could magically create money with a wand (as implied in a throwaway line of the script), how would the economy continue to exist? Why would you so disrespect Joel Edgerton’s wonderful acting with 15 pounds of tattooed hamburger makeup?

Oh god let’s try and start at the beginning, something Bright most certainly has nary an interest in. 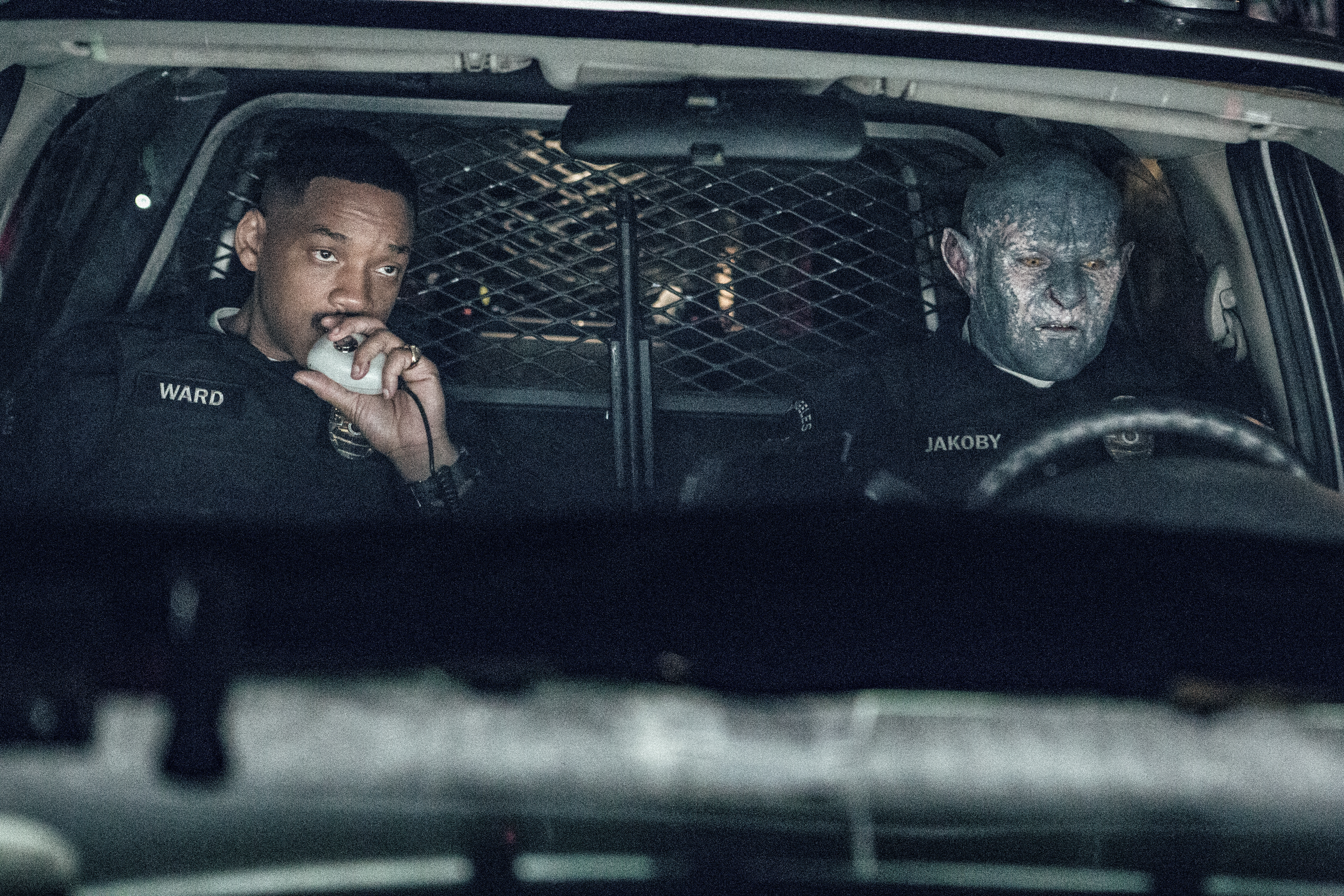 Will Smith is a cantankerous LAPD cop with a loving cantankerous wife and an anecdotal daughter (cantankerousness pending further research). Except, like, magic and shit exists. You can tell, because he has to whack an evil little goblin faerie to death with a broom in a pest-control flourish on the front lawn of his house (I’ll avoid the oft-referenced quip which autographs this scene, which could only have been written specifically by a white man). Also, he’s so dang close to retirement you guys. His partner Joel Edgerton is an orc (Orc-American?), more about whom we’ll learn as he drives Smith to the precinct in a scene insultingly written as if the two characters had never met before, both engaging in an exposition-laden gruff jokiness that sets the bar for the rest of the film’s dialogue.

At work, Smith can’t actually decide whether he’s a racist to orcs or not, and determines an allowable level of racism from his colleagues to his own partner, who’s positioned as a kind of orc cop Jackie Robinson. This is because Will Smith’s infuriating mustache is actually the familiar of a dark sorcerer from another plane of reality, partially controlling his mind and actions and confounding any traceable character development.

Well I don’t know, do you have a better idea?

I don’t like synopsizing a plot in reviews, but everything about Max Landis’ Bright script is pointedly offensive. Every other sentence contains a clumsy F-bomb, giving it all the respectability of a high schooler’s metalhead manifestos or daydreamed band names scratched onto a denim 3-ring binder. Where a story so much as wants to emerge, instead we get a curt exposition joke and a yadda yadda yadda for our trouble.

The implication that an African-American would need to fundamentally re-learn what racism means in this Southland fairy tale implies a hydrogen bomb of ignorance having been dropped on the population in some unseen title card. And I’m not saying that individuals (or Black men) have some unmitigated disposal to being woke, but Smith is literally written as if none of this is understood or experienced. There is a dangerously ignorant implication in the story that Black folk, once they’ve been displaced on the bottom socio-economic rung by a new “race” (heavy scare quotes here), would happily position themselves above them while hurling epithets, unmoved. I don’t believe this to be true, but I do believe this is something a white writer would believe to be true and write about.

It’s as if to say, Black Americans wish they had a Blacker American to be unified with racists towards. 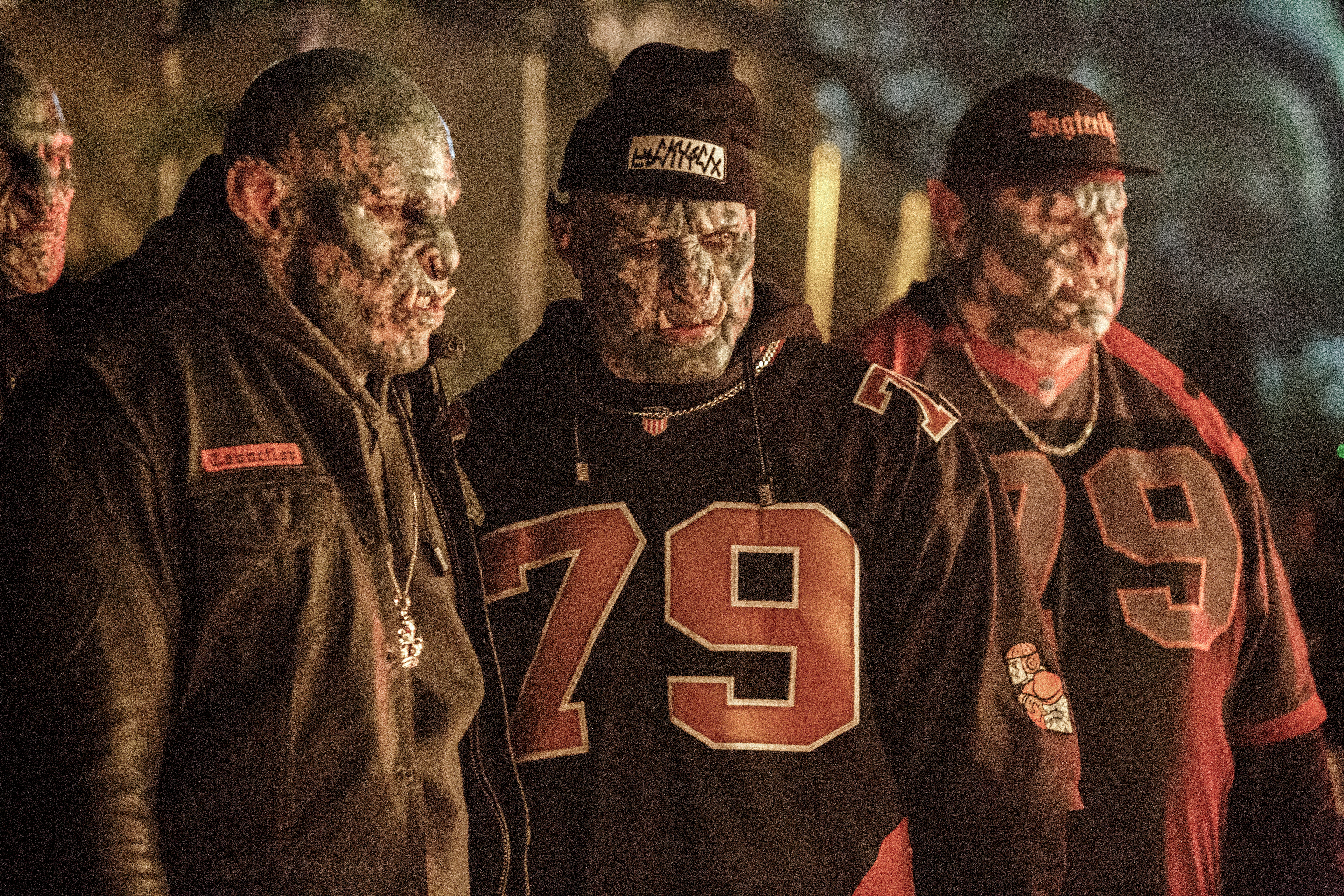 I’m deflecting the mesmerizing stupidity of this story with my own politics, I know. And to be honest, I do think that there is room in our understanding of racism to permit some level of nuance in a story. But this shit ain’t Do The Right Thing. The summary point of Bright is: beat the shit out of Black people and orcs by every other class of society enough times in a given day and they will eventually respect and protect each other. That is a strangely optimistic but bullishly simplistic outcome for this insipid movie, and not even the thing I’m most mad about by a mile.

I’m upset that a special effects designer decided to hamper Joel Edgerton’s ability to emote. I’m upset that for the umpteenth time, Latinx people exist in an LA movie solely as a rampaging violent gang out of some remake of The Warriors who are all eventually cut down like so much wheat. And speaking of people of color dying, by the way, don’t get too attached to that promising cast list in the intro, including Margaret Cho, Veronica Ngo, and Jay Hernandez; Will Smith is possibly the only brother to get out of this alive, and most actors of color have barely any lines in this movie.

Did I spoil Bright for you? Good. I didn’t mention the centaur cop we see in a virulent, awkwardly insensitive scene of police brutality to the orcs, standing in the background but never identified or described. Or how badly the two leads are beaten, sometimes directly stomped out by a circle of assailants wielding lead pipes, always able to recharge their health to full like a multiplayer Halo match. Or that the film is so poorly lit, we are often unable to even see what $90 million was spent on.

Or maybe it’s that, if the point of the film is to somehow succeed where others have failed in the past at making Will Smith unlikable in a character portrayal, it almost gets there.

Bright is now streaming on Netflix.