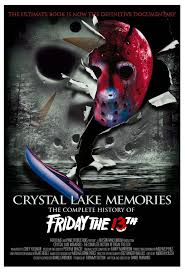 I’ve been taking a dive into the Sundance Now movie app recently and found some great horror films. I was also immediately drawn to the six-hour documentary Crystal Lake Memories: The Complete History of Friday the 13th.

Friday the 13th was the very first horror film I saw in the theater. It made me a fan of the horror genre and I followed it from the big screen to the television series.

This documentary takes us on a journey through the series from the point of view of producer Sean Cunningham, writer Ron Kurz, several of Jason’s victims, and Betsy Palmer, who famously played Jason’s mother, Pamela Voorhees.

The hours really flew by while I was watching this. I spent four hours watching it in one sitting, and then finished it the next day.

I really liked the candor of the creators of the franchise. Cunningham admits that the original story was pitched as a “Halloween rip off”. They also confess that a full explanation for Jason’s return as an adult male in the sequel is deliberately vague.

A small budget for the first film resulted in oversimplifications in the story and other unique choices. Interestingly, the first film was shot at an actual boy scout camp at the end of the summer season. The actors were all young and fresh-faced, straight from the theater community.

A billion dollar franchise sprang from these roots, and Crystal Lake Memories traces them all. Many horror tropes also sprang from these films, but the series has had a history of strong female leads/survivors as well. This is a much watch for fans of the films.

Crystal Lake Memories: The Complete History of Friday the 13th is available for streaming on Sundance Now, in a curated selection of films named “Halloween Treats.” Check out the Sundance Now website for more.