Twenty-two years after the release of the first film, the sequel to Jumanji provides laughs in its own way and sees Jack Black shine! In Jumanji: Welcome to the Jungle, we see the original board game on a beach, found by a couple running. The man takes the game home to his teenage son, Alex Vreeke (Nick Jonas) thinking he would be interested in playing. The son dismisses the game in favor of his usual gaming console, because who plays board games anymore, right?

Feeling neglected and probably offended that the boy would not play with it, the wooden board then magically transforms into a gaming console of its own. Intrigued by the beating of the drums, he begins to play but ultimately gets sucked in. His parents, naturally distraught that their son disappeared, moved on as if he died, and their home becomes a sort of neighborhood “haunted house.”

Jumping ahead a couple of decades to present day, we are then introduced to four high school students. Anthony “Fridge” Johnson (Ser’Darius Blain), the Jock. Spencer Gilpin (Alex Wolff), the nerd who does all of Fridge’s homework. Bethany Walker (Madison Iseman), the completely self-absorbed social media darling who refuses to stop using her phone for anything, including testing. Lastly, the socially awkward nerd girl, Martha Kaply (Morgan Turner), who turns out to be the rebel of the group when she refuses to participate in gym. For these reasons, they find themselves in detention.

It is while in detention that they are forced to clean up all of the “ancient” artifacts in the school’s basement. They find the Jumanji console, likely given to the school by Mr. Vreeke after his son’s disappearance and Alex is intrigued. They notice the game has five avatars, but only four of them are available. Dr. Smolder Bravestone (Dwayne Johnson) is an archeologist and the muscle of the avatar group. Professor Sheldon Oberon (Jack Black) is a cartographer, cryptographer, archeologist, and paleontologist. The Professor is the brains of the avatar group. Ruby Roundhouse (Karen Gillian) is a commando and dance fighter who is literally the kickass woman of the avatar group. Lastly, we have Moose Finbar (Kevin Hart), a zoologist and weapons specialist. The game sucks the students in and assigns them each an avatar. Spencer becomes Dr. Bravestone, Fridge becomes Moose, Bethany becomes Shelly and Martha becomes Ruby. 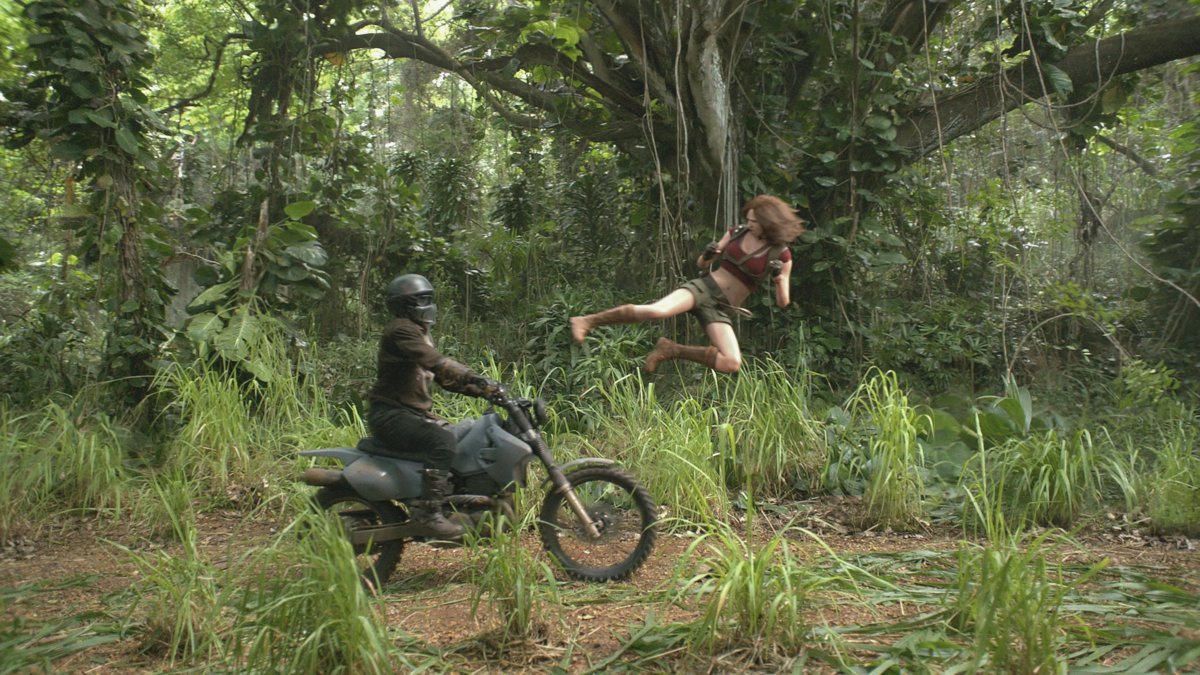 So as the adventure begins in the jungle, they realize very quickly that they have three lives, and if they lose their third life, they die. In order to return home safe and sound, they much complete the game. They can only do this by defeating John Hardin Van Pelt (Bobby Cannavale) by returning the “Jaguar’s Eye,” a stone that controls all of the animals, to the Jaguar statue and calling out “Jumanji.”

This ensemble is really funny. Kevin and Dwayne are always a delightful comedic duo. They play off each well like they do in any film they are in together. It’s always good to see Dwayne Johnson play a nerd, I appreciate his ability to convince us that even with his stature, he is still a sensitive man. The most drastic physical change in the film is, of course, Bethany becoming Professor Oberon. Jack Black is my absolute favorite, hands down; he kills as a teenage girl trapped in a grown man’s body. His timing is unmatched and he is one of the main reasons I was laughing. His ability to nail the essence of a teenage girl, while portraying danger and being arguably the most brilliant mind on the team, is just what the film needs.

Ruby, while grossly underdressed for the jungle and her role (which they poke fun of) is still BA when it comes to fighting. The romance between Martha and Spencer is adorable, but hilarious when they’re in the bodies of Dwayne and Karen. Van Pelt is fine, as he’s what you’d expect a game villain to be. He is evil, with one goal in sight, and will kill anyone and everyone to get what he wants. While the stakes are pretty non-existent in the way of a true threat since we know our four students will return home safely, the film does have a lot of adventure and a bit of heart. We even get to see the return of the fifth avatar, as **spoiler alert** Alex is still alive and has been trapped in the game for 20 years, making him the true expert on surviving Jumanji long term, and he provides some great assistance to the team. 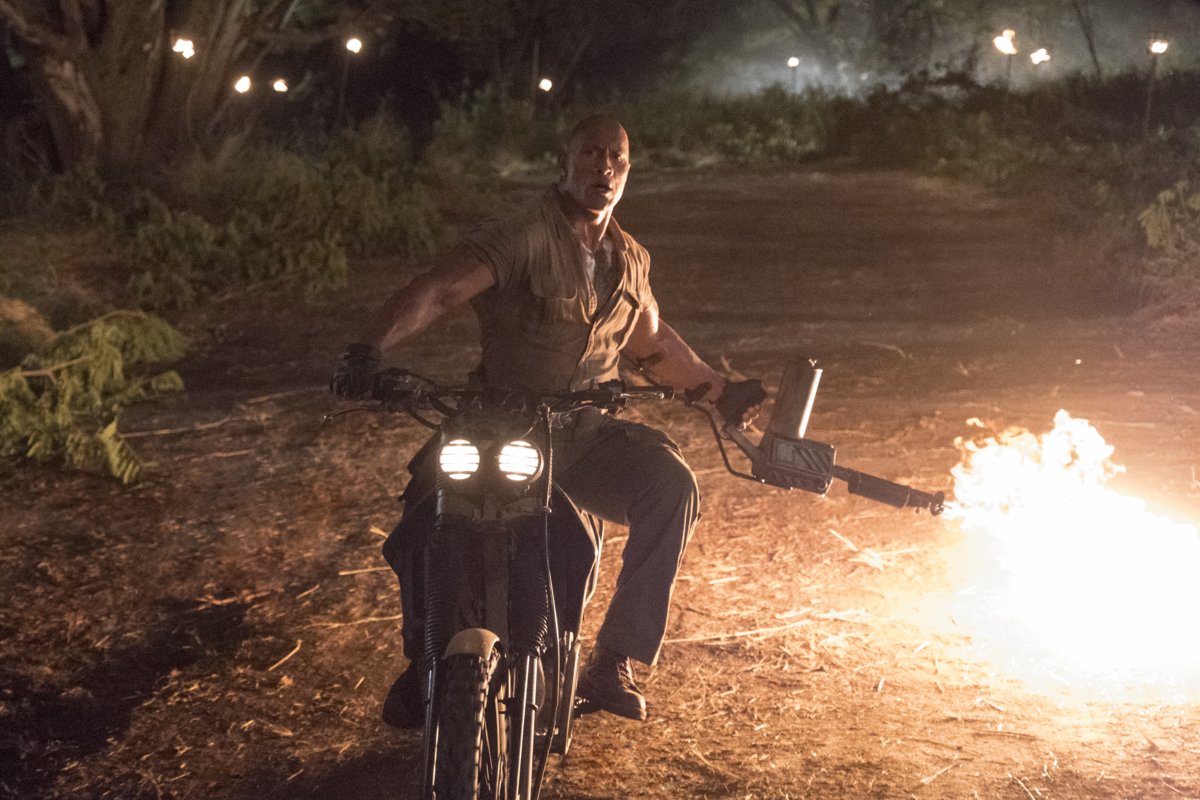 All in all, I had little-to-no expectations going in, as I knew comparing this film to the original would only end in heartbreak. Instead, I approached this film with fresh eyes and excitement, willing to give it a chance as a new and separate experience. This film manages and succeeds at creating its own dynamic for the four heroes. While drastically different from the first film, it works in a lot of ways, mostly because it does not take itself too seriously. Jumanji is one giant jungle excursion with great one-liners and good action-packed fun for the family. Just be mindful of some sexually explicit jokes if you’re taking the little ones. At the core of it, Jumanji is a story about friendship, fun, beating the odds, and helping those closest to you overcome their fears, while encouraging them to always be their authentic and bold selves.

Check out Jumanji: Welcome to the Jungle, in theaters now!