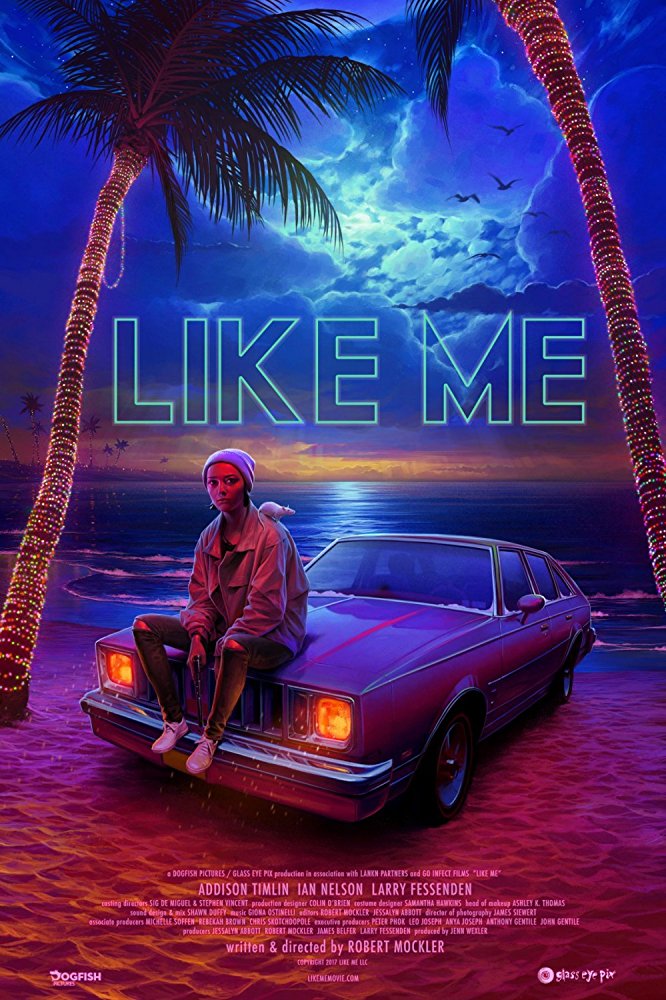 The treasure of self-actualization in the age of look-at-me, of YouTube stardom and YouTube star hangers-on, each one tussling for most followers. Robert Mockler’s Like Me is a kind of agitated, drugged-out road trip, leading from roadside motels to the comments section and back again. Although this journey might result in hazy or debatable resolutions, there’s plenty here to enjoy and explore, so gather round the cathode ray campfire.

Maybe “enjoy” is the wrong word. To be truthful, something about the swirling, menacing, candy-coated nausea of the film’s environment and cinematographic style convinced me that there’d be worse on display. It uses the recognizable language and atmosphere of torture-porn, but Like Me‘s unpleasantness is rarely, if ever, actually gory—good news for me and my sensibilities, possibly bad news for those sold on this potential in its dazzling trailer. Regardless, there were copious moments when, while watching it, I did feel weirdly churned and tossed about.

Take the introductory scene, a bit misplaced as a teaser in the trailer of what’s to come (it’s stylized, but a quite singular scene in the movie). We meet Kiya (Addison Timlin), a social media misfit racking up major upvotes on an extended mischievous spree through Anywhere, USA. Here she’s tormenting a kind of grimy gas station clerk, stabbing the air in front of his terrified face with a gun, all captured as a feed on her swaying smartphone’s camera in a way not dissimilar to a modern FPS. It’s daunting, and you expect the worst, but surprise! Her gun’s not loaded.

I’m inspired to want to draw a parallel between this seeming lack of payoff and other aspects of the film’s philosophy, but I don’t think this is accidental. Compare it to, for example, J.T. Petty’s S&Man, a truly gut-wrenching, gut-emptying pseudo-mockumentary with a character who purportedly kidnaps women to torture and kill, selling the recordings at dingy horror conventions as works of fiction. The scenes in that film were truly nauseating and disgusting—although meant to portray the pursuits of a potentially nauseating and disgusting audience—and I complete tapped out, never able to finish watching the film. Contrastingly, Like Me is surprisingly tame with its money-shots, and yet its menace is successful and strange.

I feel like, where S&Man sought to portray the kind of bloodthirsty and addled subculture not uncommon to certain 4chan boards and dusty dirt-mall conventions, Like Me is looking more for people…well, like us. Internet denizens satisfied with the treasures revealed on YouTube or a lower-key Worldstar video where, hopefully, no one actually dies. Is threatening a clerk with an unloaded gun a victimless crime? Most would agree that it isn’t, yet it’s a video that might live on the internet for a little while before being pulled, maybe even with an ad or two.

Back to the story: Kiya collects views, fans, but also anti-fans who wish the worst on her. One particularly devoted nemesis even records his own response videos to her acts of criminal mischief, portraying a moralist counter that is eerily similar to the smug self-satisfied monsters trying to out-rant the accusations made during #Gamergate. Eventually, Kiya’s journey takes her to a fleabag motel where, after inviting the owner Marshall (Larry Fessenden) to her room for casual sex (and implying that she’s only 17 years old, a point never actually qualified in the script as true), she ties him up, forcefeeds him candy and snacks until he vomits, and bundles him in her trunk as a seemingly pointless hostage.

The relationship between Kiya and her victim Marshall occupies the bulk of the film, for better or for worse. Fessenden turns in an impressively grizzled performance, and just seems super skeevy and sketch overall. He’s a guy you might not be frightened of, but wouldn’t want to turn your back to. Strangely, the hotel rooms he manages are covered in evocative, displacingly surreal art; bloody flowering designs, a maelstrom of bursting stormclouds, and the like. Originally, I was convinced that this was some kind of an implied hallucination, or even Kiya’s own creative transformation of a given space, but it’s revealed to be Marshall’s artwork.

This awareness grants a greater layer of subtextual meaning to the two characters. Kiya’s performance art is on display for millions to watch and bicker over, whereas Marshall’s more conventional—but beautiful—paintings are restricted to be appreciated by the few drifters who find themselves in his hotel. The insider and the outsider artist, respectively, but with additional roles and aspects unpredictably mismatched—the insider here is an outlaw, on the run and with a well-documented yet illegal escapade, while the outsider is coloring within the lines of legitimacy and employment, even though he lives decidedly on the fringes.

I’ll leave the other events of the film unspoiled, but Like Me is rather effective in its uncertainty, right until the end. It’s also visually pleasing but erratic, using disorienting wide angles, neon colors, and repeating two-frame cuts to amplify a kind of hallucinogenic dread. This all makes the cuts to YouTube clips even more jarring, rendering these scenes almost quaint or commonplace, in comparison to the world where Kiya and Marshall seem to live.

I feel like I should mention that audiences who like their denouements immaculately wrapped and pre-dissected may not necessarily appreciate where it all lands, but just be aware that the story doesn’t end in the middle of a sentence—there’s a confident and satisfying finale.

For a psychedelic crime spree, there’s a continuous grounding in Like Me‘s scenes of internet commenters rambling back and forth about the meanings and morality of Kiya’s crimes. These critiques are hinted to be but a sample of a greater population, and their attempts to fill in more of Kiya’s personality are thwarted by her own reluctance to reveal almost anything. As for Addison Timlin herself, she is effectively murky as Kiya, making the kidnap scenes as successful as can be, since you really never have an idea of how she’s going to react in a given moment, even more than halfway through the movie. By exposing her actions so readily for public consumption, she withholds the real and pertinent aspects of herself from any potential eyes…maybe also any real understanding or, daresay it, love. Her multiple cameras render her even less visible than she would be without them, a pertinent irony that I interpret the film is trying to make.

Like Me hits theaters in limited release on January 26th, and will be streaming on VOD platforms February 20th