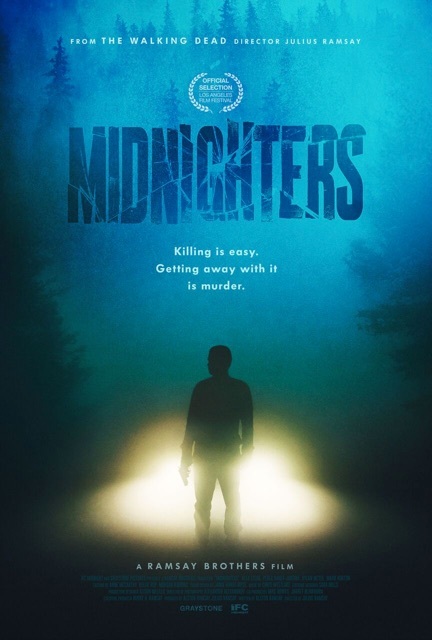 Off the top of my head, I can think of several “film brothers” that tend to dominate in chosen genres. The Russo Brothers are well-versed in superhero films, the Coens have created a variety of hipster dramas and the Duplass Brothers thrive in dramedies.

The Ramsay Brothers attempt to master thrillers with Midnighters.

The film follows Lindsey (Alex Essoe) and Jeff (Dylan McTee), a young married couple who leave a New Year’s Eve party only to commit manslaughter when they hit a man with their car. “The road to hell is paved with good intentions” rings true in this film, as all of their attempts to rectify their mistake digs them deeper and deeper into a web of lies, greed and in some cases torture.

In the midst of their mess is Lindsey’s little sister Hannah (Perla Haney-Jardine). In many ways, Hannah plays into the trope of the troubled little sister; her ex-boyfriend (who is presumed dead) was involved in some shady business, and Jeff frequently complains about Lindsey trying to fix her, while he sees her as a lost cause. As the movie progresses, the audience questions Hannah’s involvement with her past boyfriend’s activities, especially when it’s revealed that the man Jeff hit was coming to kill her.

There is a noticeable shift in Jeff’s character as his circumstances and desperation cause him to make increasingly more loathsome decisions. It’s possible that this is who he was all along, and we (the viewers) discover this, alongside his wife as their marriage dissolves. Despite the clear intentions of a fluid regression to villainy, Dylan McTee’s performance remains unconvincing. This is disappointing, because in his last role in the short-lived show Sweet/Vicious he played a believably menacing villain.

I found myself questioning the overall message of Midnighters, which seems to hover around the basis of ethics and trust. However, Lindsey is the only character in a position to question other people’s ethics, as she seems to have the best intentions. Still, she never completely falls into the trope of the damsel who survives because—like every significant character in the film—when the option to do the wrong thing is presented, she takes it without hesitation. This becomes the most compelling facet, that in some ways, all of the characters represent the villain.

Midnighters is Alston Ramsay’s first credited work, which is obvious; there are lots of moments throughout the dialogue that are sparse, which creates a feeling that the characters are trying to say something but struggling to find the right words.

Julius has had a lot of experience as a director (The Walking Dead, Scream, Battlestar Galactica). This background is evident through the violence we see during the film and the sense of tension that is built. Alexander Alexandrov is a commendable DP, his cinematography is beautiful and skillfully used to portray emotion.

Midnighters occasionally relies on tropes but it makes for an entertaining watch.