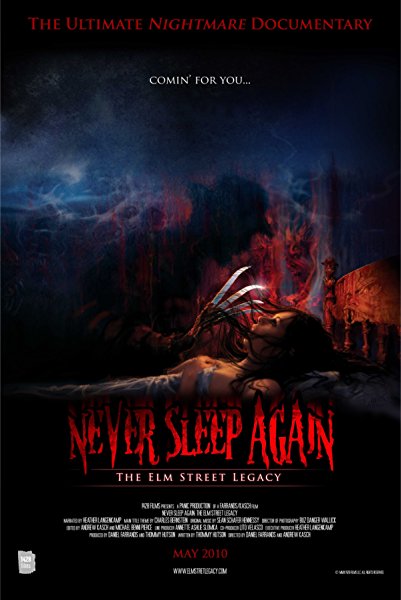 The Nightmare On Elm Street horror film franchise debuted to a tremendous response in 1984. Freddy Krueger would become a horror icon and, in the documentary Never Sleep Again: The Elm Street Legacy, we learn about all the elements that make him a classic.

Wes Craven had a variety of influences in forming the story. The nightmare aspect came from a story Wes read about a young Filipino boy who had night terrors. After forcing himself to stay awake for several days the boy was found dead in his room with all his prescription sleeping meds under his bed untaken.

Craven also studied the psychology of colors and discovered that Red and Green causes a troubling visual response when placed side by side so he picked those colors as the stripes in Freddie’s sweater.

Freddie’s look was based on the scars of burn victims but the very final element came to the special effects designer while he was consuming a pepperoni pizza.

The film is narrated by Heather Langenkamp who shares with us her history with the franchise, from her initial script reading to the various hurdles making the film. Heather shares that what she loved most about Nancy was her determination to save herself when others failed to believe her. Heather also shared that the fact that many of the scenes where physical in nature it added to the terror seeing Robert Englund on set in full wardrobe.

Englund and Amanda Wyss also share some insight into their most shocking scenes, which included revolving rooms and quick camera cutaways that outwitted the censors.

This is a must watch for fans of the Nightmare franchise. All the movies are covered except for the 2010 remake starring Jackie Earle Haley. My recommendation is to make sure to go back watch the original films afterward, to fully enjoy all your newfound knowledge.

Never Sleep Again: The Elm Street Legacy is available for streaming on Sundance Now, as part of their curated selection of films, “Halloween Treats.”

Kai Charles is a Medical Professional, Jedi Hopeful, and Independent Book Reviewer at Fiction State of Mind.
You can also find her on Twitter @yogikai, tweeting about all things relating to Books & Geek Culture