When they announced that a female-led Ocean’s Eleven spinoff was in the works, I was pumped. The fact that it starred Sandra Bullock was a surprise because I’d always expected that version to star Julia Roberts. But it still seemed like a good fit.

When the rest of the cast was revealed, I was even more excited.  A cast of eight actresses with, according to IMDB, a total of four Oscars, two Emmys, eight Grammys, six Golden Globes, five BAFTAs, and ten SAGs combined? Even the newcomer to the big screen, Awkwafina, brought not only her huge fan following, but proven comedic skills.

Plus, there was real talent behind the camera as well, with writing duties being shared between Olivia Milch (Dude) and veteran Gary Ross (Pleasantville, Hunger Games), who was also directing.  Much like Sandra Bullock’s character in the film, Ocean’s 8’s producers assembled a top-notch team to pull off the big score: a hit female-led summer movie. What could go wrong?

Unfortunately, a couple of things.

**Warning: some spoilers ahead.**

Anyway, Debbie is a con artist like her brother. Like Danny, she’s good at her job, but for some reason, like Danny, she ends up in jail for a stretch anyway. Once she’s released, she has no plans to go straight, unless it’s straight on to the next big job. Since she’s been planning it for the last five years, she immediately starts assembling a team for her biggest job yet. Oh, and just like Danny, there’s an old flame who is part of the reason for the big job.

So, it’s a bit formulaic. That’s not surprising since it is a heist movie. What would a humorous heist movie be without the motley crew of genius crooks, the clever cop who is not quite clever enough, etc.? If done well, the formula is part of the fun because part of the kick of the heist movie is seeing what form those puzzle pieces take as the plan unfolds. 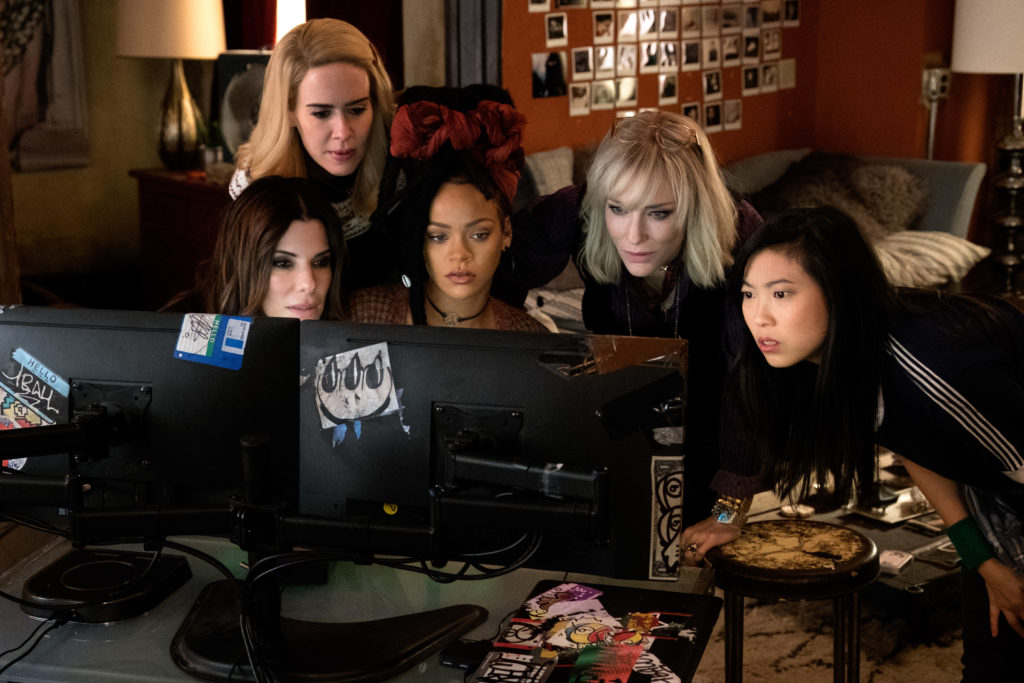 But Ocean’s 8 doesn’t quite put those pieces together in an entertaining way, and a couple of things feel just plain wrong. A good example is the character of Debbie’s former flame, Claude Becker, played by the gorgeous Richard Armitage. The character seems out of place the whole time. There’s not enough chemistry, good or bad, between he and Bullock, to make the “he-done-me-wrong” story work. Plus, you can’t help but think how did she not see his betrayal coming?  How do you play a player at her level of the game?

Also, the lack of a true bad guy/bad girl, with whom to contrast our hero/crooks, was problematic. A heist film like this one (as opposed to violent heist films) needs that type of bad guy so we are rooting for our criminals to win because they have hearts of gold and the other guy is just evil. Andy Garcia fit the bill in Ocean’s Eleven and Pacino wasn’t bad in Oceans Thirteen. But we don’t get the cool villain here because, while Debbie’s ex may be a weasel, he doesn’t come off as bad enough for us to relish his downfall.

Also, the heist itself was disappointing. The Met Gala was a glamorous setting, the people were pretty, and the cameos were cute, but it just didn’t have the oomph you’d expect. The logistics of the plan were high-tech but the actual stealing of the necklace was more unbelievable than a fake earthquake in a Vegas casino. Honestly, it was so ridiculous it took me right out of the movie. I just kept saying to myself “No. Way.” I can suspend disbelief as well as the next audience member, as long as the action makes sense in the established universe. It didn’t. 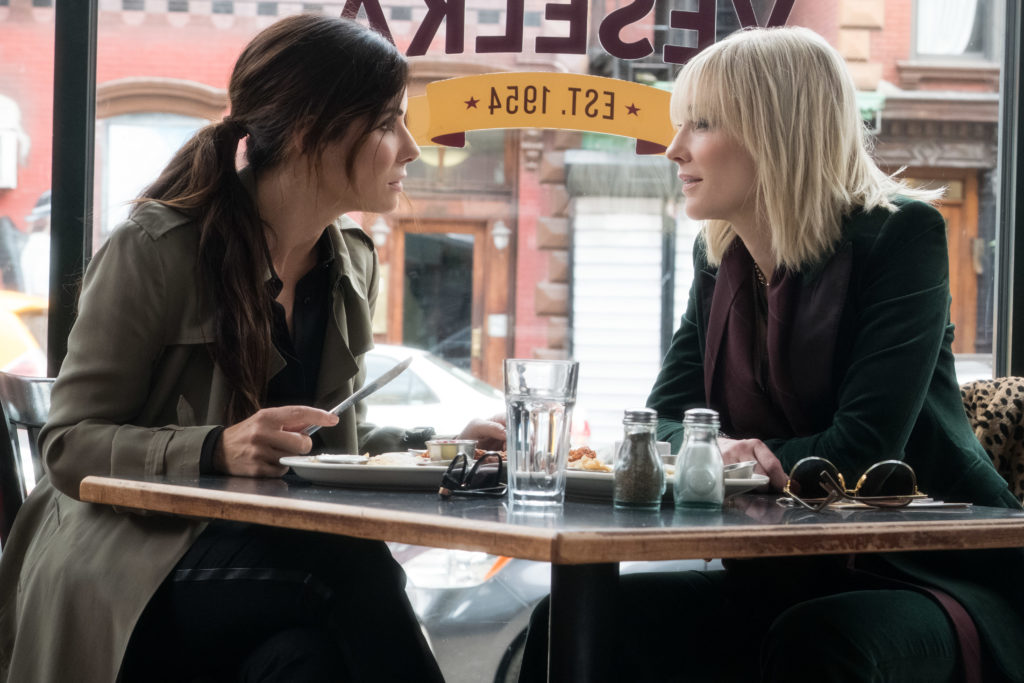 Next, I hate to say it, but Bullock and Blanchett as buddies doesn’t work either. Bullock trying too hard to be a cool girl, so nearly everything about her performance was forced. She did do some good work in the first few scenes, but after that, I lost interest. Blanchett on the other hand, settled into the role well enough, but it just felt like a cliché and there was just no chemistry between her and Bullock.

So, here’s what worked, and by “what”, I mean who, and by who, I mean Anne Hathaway. Her performance as the seemingly beyond vain and shallow actress Daphne Kluger is hands down, the best thing about the movie. Every time she is on the screen it’s like a master class in comedy. Daphne’s near nervous breakdown over the shape of her neck, and her reaction to seeing and wearing “The Necklace” the first time are officially added to my favorite comedic moments on film, right up there with Meg Ryan’s “I’ll have what she’s having” orgasm in When Harry Met Sally.

Although Hathaway’s performance is a plus, this is an ensemble piece, not a star vehicle. Luckily there were other strong performances as well. Awkwafina as Constance the pickpocket and street con artist is hilarious, her low-key portrayal oozing millennial anti-energy. Mindy Kaling’s Amita, the jeweler whose motivation for taking the job is to escape living with her mother is just great. This is the second time this year I’ve seen her on the big screen and thought, “More Mindy, please.” 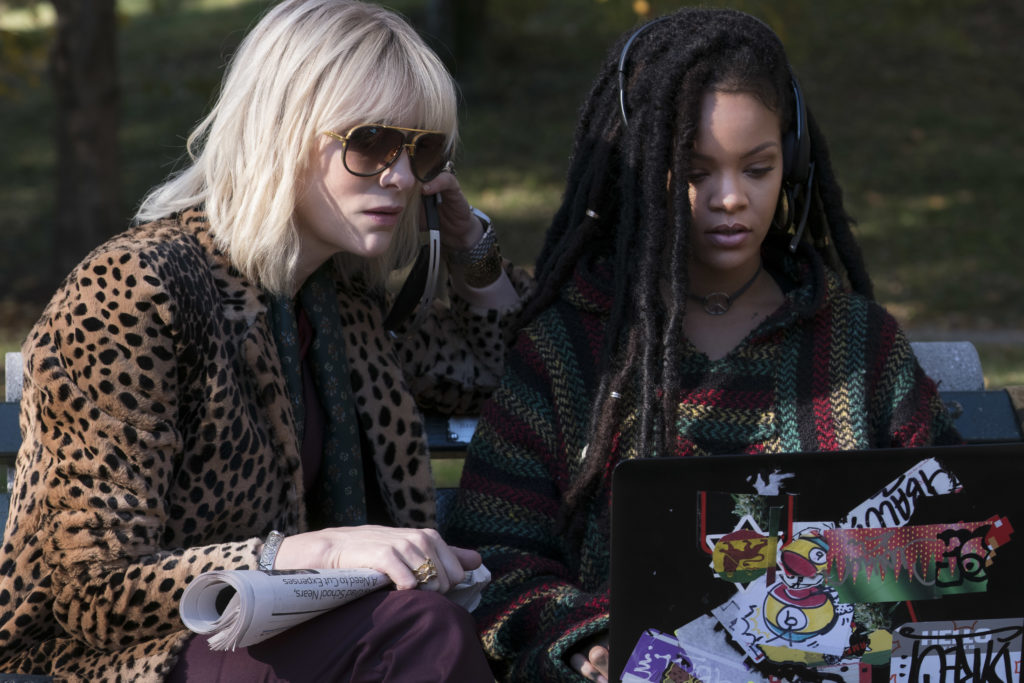 Rihanna’s hacker, Nine Ball, is wicked fun, particularly in a scene with the character’s little sister, Veronica, an uber-hacker in her own right. Played beautifully by Nathanya Alexander, her all-too-brief appearance made me wish this had been Ocean’s 9. Sarah Paulson as Tammy the Fence is fine in the role, but I did wonder why she seemed to be doing everything but. Of course, Helena Bonham-Carter as Rose, the nearly has-been fashion designer, is a hoot to watch, but it is sometimes difficult to tell just where they are trying to go with her character, who wavers between naïve and incredibly worldly.

Finally, here’s an “Atta boy!” for James Corden as the insurance investigator who made me genuinely laugh out loud. Corden and Hathaway together is pure gold. So, though Ocean’s 8 has problems, the whole package is really enjoyable, thanks to the performances as opposed to the script. Alas, it’s a bit like being promised a gourmet dinner but getting meatloaf. I mean, it’s good meatloaf, but it ain’t dinner at The French Laundry.