Okja is the story of a young girl named Mija (Seo-Hyn Ahn) and the heroic efforts she makes to save her beloved super-pig Okja, who is kidnapped from their home in the mountains of South Korea. Okja is taken by representatives of the Mirando Corporation, headed by its extremely plastic-looking CEO Lucy Mirando (Tilda Swinton). The film opens with Lucy giving a presentation of her plans to breed super-pigs, in front of a screen displaying images reminiscent of some seen in director Joon-ho Bong’s Snowpiercer. If you’ve seen Snowpiercer, you know that Bong is known for showing idyllic images using brightly-colored animation mixed with realism, and juxtaposing them with the bleak reality of society.

I initially started this review as a recap of Okja, but as I typed more and more, I began to feel I was glossing over how I truly felt about it. Anyone who has seen or read about the film knows that it is a commentary on the globalization and mass production of livestock by big conglomerates who control a large portion of the meat industry. Okja takes a clear and frankly brutal look at how animals are bred, reared, and eventually slaughtered, as well as marketing techniques used by the companies that exploit them. Bong manages to masterfully pull back the curtain of a world that is usually only seen through shaky hidden camera footage, by those who are brave enough to enter the potentially dangerous environment of commercial slaughter houses. It’s clear his intentions were to show us that perhaps we need to consider just what happens to our food before it arrives at the supermarket or on our dinner plates.

While I appreciate what Bong is saying regarding social awareness, there was something that bothered me and frankly left me shaken and in tears, and that was how humans themselves and in particular the character of K (Steven Yeun) are treated in the film. Growing up in the 90s, animal rights groups like PETA and evironmentalist organizations such as Greenpeace entered my consciousness. I saw news coverage of Greenpeace members in their little grey and orange dingies having miniature ocean battles with whaling ship employees. I watched videos of PETA protestors going up to celebrities and throwing red paint on them as they screamed vile obscenities at their unsuspecting victims. While I understood what Greenpeace and PETA were trying to protect, their method of messaging always bothered me. I found a huge disconnect in how they were willing to protect animals at all costs while treating their fellow humans beings like animals they held in absolute contempt.

In Okja I also saw this dichotomy being played out between the leader of the Animal Liberation Front, or ALF, Jay (Paul Dano) and K. When the members of the ALF were introduced it was through a hilarious attempted kidnapping, chase, and eventual rescue sequence, set to “You Fill Up My Senses,” giving it an added feeling of ridiculousness. After a chase through a shopping mall, the ALF manages to help Mija and Okja escape from the Mirando security agents who were chasing them. As the group is making their getaway in the back of a semi truck, Jay shows Mija an ALF recruitment video of rescues they did in the past and photos showing other super-pig captives like Okja. Because Mija does not speak English, K acts as her translator; an important detail since the ALF has a credo where they swear not to cause harm to humans or animals. Jay says he needs Okja to be taken by Mirando and brought to the slaughter houses so they can record secret footage using a replica of Okja’s black box. Jay asks Mija if she would allow Okja to be taken to New York, where the Mirando headquarters are located, and though she responds in the negative in Korean, Kay lies and states that she consents to the plan.

Our next scene with ALF takes place in an apartment where everyone is crowded around a monitor to watch a live feed of the hidden camera. I became apprehensive as this scene started because I had seen people give trigger warnings on twitter that there was a “rape scene” involving Okja. As the images appear, we see another super-pig brought to mate with Okja by force, as she’s trapped in a shipping container. As they stare at the screen in horror, with tears rolling down their faces, Okja can be heard screaming and thrashing around the confined space. To be honest I cried as well, because I myself had grown to care for this giant but loveable creature, so I was all in my feels. Some members of the group question if they made the right choice as they knew that what was happening to Okja was a possibility. Jay reassures them it would work out and Mija trusted them to look after and rescue Okja.

The camera focuses on K’s face and I began to get a bad feeling in the pit of my stomach as he confessed that Mija had actually said she wanted to take Okja back home to the mountains, and he had lied when translating. Before K could even complete giving his reasons for why he did it, Jay slammed his head into the table and I screamed and burst into tears, because all I could see was Glenn being beaten to death by Negan’s bat in The Walking Dead. I screamed because I saw an Asian man being brutally beaten as people who claimed to be his friends watched Jay, their leader, the man who said the ALF did not commit violence against humans, repeatedly kick and punch K as he lay curled up on the floor.

As the movie progressed one thought kept coming back to me: where were the trigger warnings for K’s beating, where was the concern for a man of color being brutalized as others stood by and did nothing? From the moment Okja was released on Netflix, people who had seen it flooded my twitter timeline with claims of being disturbed by what happened to Okja, or who said they would never eat pork again, and how the treatment of animals by big corporations like Mirando were partly why they were vegan. But I never saw any trigger warnings for people saying they were hurt by what happened to K. I never saw any distress or discomfort expressed at seeing Steven Yeun playing another character who was beaten for the second time on screen. 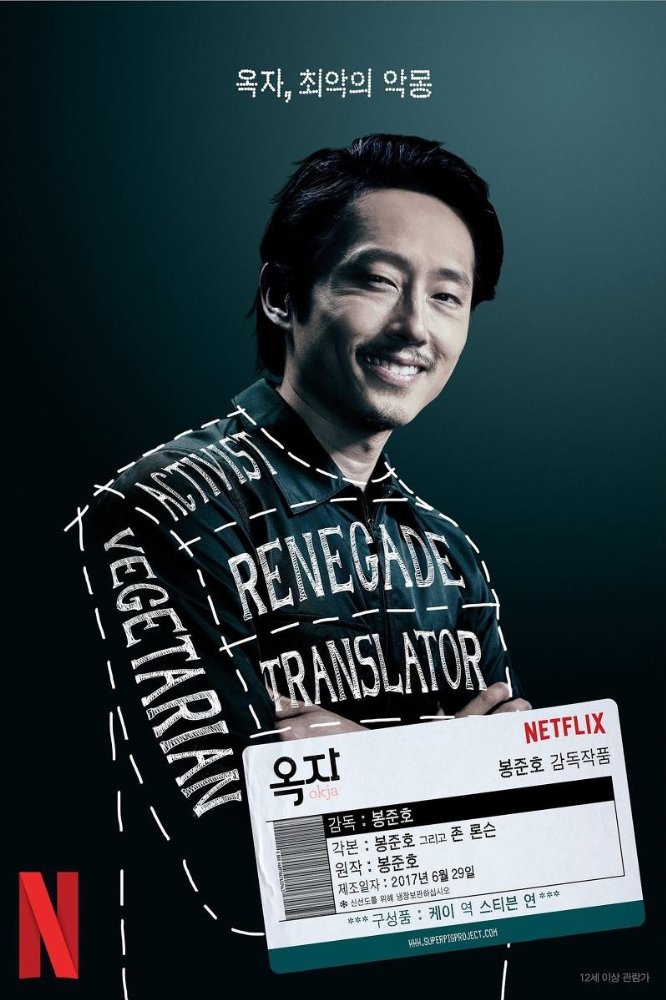 As the movie progressed I went from being in an emotional state of shock to anger. I was so angry that when Okja and Mija returned back home to live their life in comfort and solitude with a baby pig they rescued, I couldn’t enjoy it. I was upset because I saw people express more concern for an animal than a fellow human in the movie, and I was angry because I saw people show more distress about what happened to a CG pig than a human being.

As I sit here typing this, I know that what I feel about Okja is a result Bong never intended, as he may have been unaware of what happened to the character of Glenn (Okja began filming in April, 2016), but even then, the brutality shown by Jay is a clear conflict between his claims to be a friend of living things while showing such little disregard for his teammate. In the end, I see this dichotomy as a trademark of Bong’s films, as he is known for showing that humans are extremely flawed and often violent creatures.