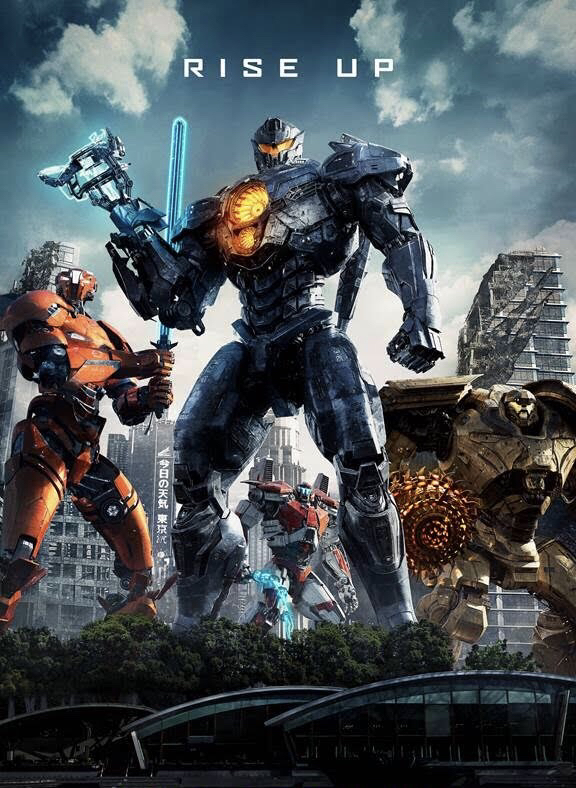 Like the Daft Punk song, Pacific Rim Uprising gives us a world that is harder, better, faster, stronger, and definitely bigger. Not only do we have more advanced jaegers which have benefited from the decade since the events of the first film, we also have a younger contingent of pilots and new opponents for them to face. The conflict remains centered on saving humanity from giant monsters known as kaijus and, like the first movie, this one weaves in grand themes of belonging and proving oneself.

Jake Pentecost (John Boyega), the son of Stacker Pentecost (Idris Elba), starts off the movie having forged a life on the outskirts of society. Rather than living up to the potential his family saw in him, he chose a life of crime. He finds an unlikely compatriot in Amara Namani (newcomer Cailee Spaeny), a young girl who built a jaeger out of scrap material. She, too, lives on the outskirts, haunted by her past and determined to not let it repeat itself. A series of events lands them in the Pan Pacific Defense Corps(PPDC), the first line of defense against the kaijus. Both of them are outsiders in the regular world, as well as this new world they find themselves thrown into.

Boyega plays Jake with a roguish charm, quick to crack a joke and make light of almost any situation, and he’s the source of most of the film’s humor. He’s also quick to run from the responsibilities placed on him by his father, his adopted sister Mako Mori (Rinko Kikuchi) and the PPDC; he’s almost the complete opposite of Stacker, though we eventually start to see growth in his character through his burgeoning relationship with Amara. Spaeny brings a wide-eyed joy to Amara when confronted with the jaegers she’s idolized that’s tempered by the jadedness that comes from growing up on her own. She draws out a protective side from Jake.

While Pacific Rim was mainly focused on a small group of core characters, the sequel introduces us to a host of new characters including Liwen Shao (Tian Jing), the cold and calculating head of a company that seeks to mass produce drone jaegers, and Nate Lambert (Scott Eastwood), the ranger with a shared past–and now a strained relationship–with Jake. We also meet a culturally diverse stable of young jaeger pilots in training. The call for greater diversity in films has become a rallying cry on social media and, more recently, in Hollywood. The first Pacific Rim accomplished that with ease, and Uprising builds on that by giving us cadets from around the world. Unfortunately, the problem with introducing so many new characters at once is that we don’t really get the opportunity to delve deeper into their stories. Whereas the relationships between characters were crucial to the original film, we aren’t given enough time to get meaningfully attached to any in the sequel save for Jake and Amara’s, and the preestablished relationship between Dr. Newton Geiszler (Charlie Day) and Dr. Hermann Gottlieb (Burn Gorman).

The jaeger pilots in Pacific Rim succeeded in cancelling the apocalypse. In the ten years since, the PPDC has trained in case the kaiju found their way back through the trans-dimensional pacific rift. Liwen Shao seeks to replace the two-manned or occasionally three-manned jaeger system with her drones. Standing against her is Mako Mori, who is no longer the rookie pilot she was in the first film. She holds a position of prestige in the PPDC and it’s her vote that will decide if the drone program goes online or not. The vote is interrupted by a mysterious rogue jaeger that Gypsy Avenger, the spiritual successor of Gypsy Danger piloted by Nate and a reluctant Jake, has to take on. Finding the origin of the rogue jaeger is a shocking reveal that explains how the kaiju re-enter our world.

Given that this is a movie about giant robots versus giant monsters, the visual effects are its selling points. Most of the battles take place during the day, highlighting the full force of this new series of jaegers and the monstrosity of the kaijus in a series of fast-paced and visually stunning battles. If the battle sequences were your favorite part of Pacific Rim, the sequel will not disappoint. These city-sized battles are where it really shines. This movie is more than just giant robots fighting. It’s also about the the young cadets letting go of petty rivalries to rise up and take charge in the absence of adult leadership, and I can’t think of a better time for this message. It’s also about Jake finally taking control of his destiny and living up to the potential his family saw in him. He could have run away from the fight; instead he chooses to stay.

Pacific Rim spoke to that part of me that loved Gundam and Neon Genesis Evangelion with a little Godzilla sprinkled in, and Pacific Rim Uprising follows in that tradition. Steven DeKnight’s film expands on the world of the original, resulting in a fun summer blockbuster released, perhaps, a few months too early, but definitely worth seeing nonetheless.