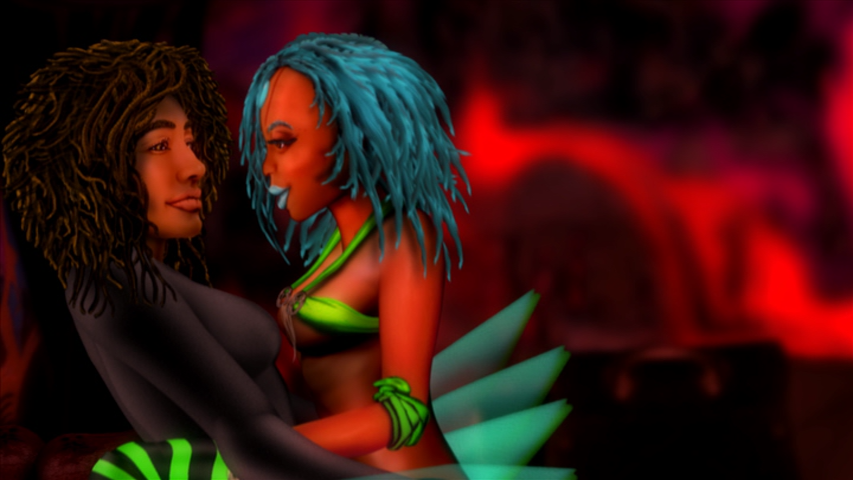 I go for the strange, as do many others seeking reprieve from the cliché, doddery, cookie-cutter conventions that arrive in step with expectations of sci-fi. GB Hajim and Shelley Doty’s Strange Frame fulfills these needs readily, using an urbanized far-future setting to tell a dramatically narrated story about love and creativity. It’s the kind of project where for every slightly off-key scene or inelegant production detail there is an innovative idea, concept, or twist on the sci-fi formula. It’s bursting at the seams with imagination and features a conspicuously diverse cast of characters to boot. 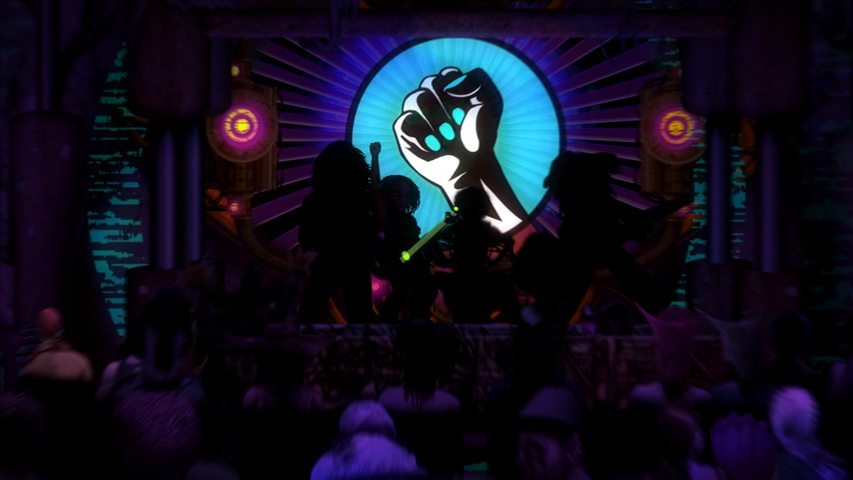 Originally releasing in 2012, Strange Frame takes place in the 28th Century on Ganymede, the largest of Jupiter’s moons. Humans escaping their ravaged home planet sign up for indentured servitude in order to leave it, a gambit that ends up unsurprisingly compromised by the powers that be, essentially creating a new era of rampant slavery. Political upheaval joins step with the anger of a betrayed population, creating an aggressive environment and establishing a backdrop of conflict. Interestingly, another film would’ve built its arcs entirely on these details, but Strange Frame utilizes them as a support structure to tell a uniquely intimate adventure-romance story, focusing on saxophonist Parker (Claudia Black, moodily serene) and singer/songwriter Naia (Tara Strong, pretty much erotically unhinged here).

Parker and Naia have a meet-cute at a riot precipitated by the plight of the debt slaves and a runaway love affair begins. They quickly occupy specific and recognizable archetypes; Parker is the damaged, doubtful elder guide, while Naia is the young explosive upstart who re-enlivens her partner’s sense of hope almost instantly. The two end up collaborating (ahem), with Naia emerging as the new singer for Parker’s spaced-out reggae-fusion band, earning them the audience and applause they evaded when it lacked such a charismatic frontwoman. 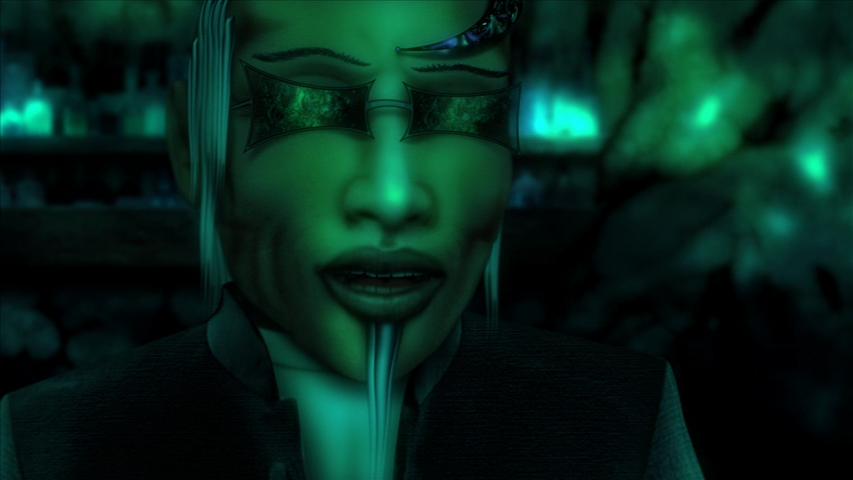 Tim Curry’s name immediately stood out to me on the DVD cover, and his character here is probably the most predictable aspect of the film. As suspicious A&R Dorlan Mig, Curry gets to be as dauntingly leery as he pleases, working to seduce the band into signing off rights but, more specifically, targeting Naia to be scooped up and elevated to solo-popstar status. As the central villain, Mig is also given his own layers, as even his underhanded dealings are at the mercy of his corporate overlords.

Again, though, it’s all about the devil in Strange Frame’s details. The way talented singers are handled by Mig’s corporation is a kind of mass personality thievery, with robot bodies implanted with a given artist’s entire stolen memory and “soul,” effecting a kind of body snatch; eventually, this synthetic copy will be the more easily controllable puppet-star. In the far future, corporations have so effectively dehumanized creativity that it can be purely commodified, eradicating the unpredictable original human article.

There’s also an entertaining side-plot which eventually joins the main narrative, involving Ron Glass as disabled salvage ship pilot Captain Philo and Cree Summer as Reesa, his savvy and caustic first mate. The two roam the galaxy with faulty paperwork, salvaging and earning money for a pie-in-the-sky while dodging the authorities.

There are copious back-story puzzle pieces, worldbuilding asides, and wiki-ready morsels to contend with in Strange Frame, which thus wanders into expositional storytelling at times. That being said, most of it ties together well and is fairly economical for its depth, and I appreciate many of its thematic choices. The aforementioned pop-star robots, for example, represent their own deeper range of allegories; the robots were originally built for war, and while some are used as pop-star clones, Philo and Reesa end up hacking one to serve as a functional ship computer (to which it confidently resists). Both of these conflicts resolve more disastrously than their originators would predict, and I like the comparison point of pop-stars and soldiers both being “recycled.” 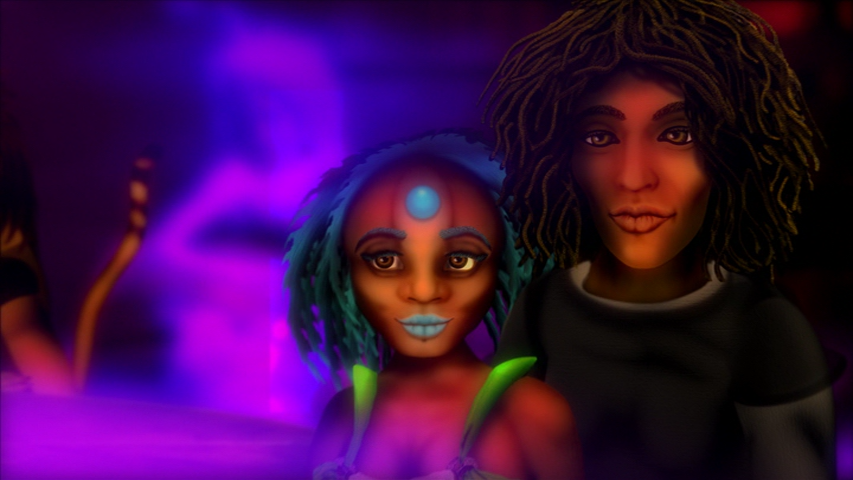 There are also some powerful emotional motifs that play off of these concepts of theft and ownership, and some of Parker’s own character growth may relate to her reckoning with how much she and Naia “owned” each other in the first place. Sounds lofty, but while the animation looks, at a glance, like a DayGlo-flecked stretch of psychedelia, the script is quite sensitive and often even mournful. Part of that might be due to Black’s narration, a tormented, sometimes goosebump-raising performance that frequently feels on the brink of tears, if the character had any left.

I’m leaving the animation for last, because it was the thing I struggled with the most. In virtue of Strange Frame’s intentions, they are readily met by the score, script, and performances. The cutout style of animation it uses, however, will probably be the snag for some viewers. None of it feels cheap or poorly-thought out—quite the opposite, and its development time was a lengthy and careful affair—but I sometimes found it tiring and distracting to watch a film tied to this design aesthetic, creating an undoubtedly “off” feel to it on occasion. The buzzing lights and drugged-out special effects attempt to stir up the activity on-screen, and the camera is constantly drifting and dynamic, but the action invariably feels…well, flat, which it technically is.

I imagine Hajim and Doty had a powerful design document / story-bible for this movie, because lesser sci-fi work (even of the AAA-budget variety) would trip up on a fraction of the worldbuilding they put into action. A tolerance for Strange Frame’s unique animation style is probably required for most viewers, but they’ll discover a smart, characterful story about love, music, rebellion, and fascism, enthusiastically performed and one-of-a-kind.

Strange Frame is available on DVD and digital formats from a variety of sources, including www.wolfevideo.com

Cult Classics: Give Yourself Over to the Absolute Pleasure of ‘The Rocky Horror Picture Show’