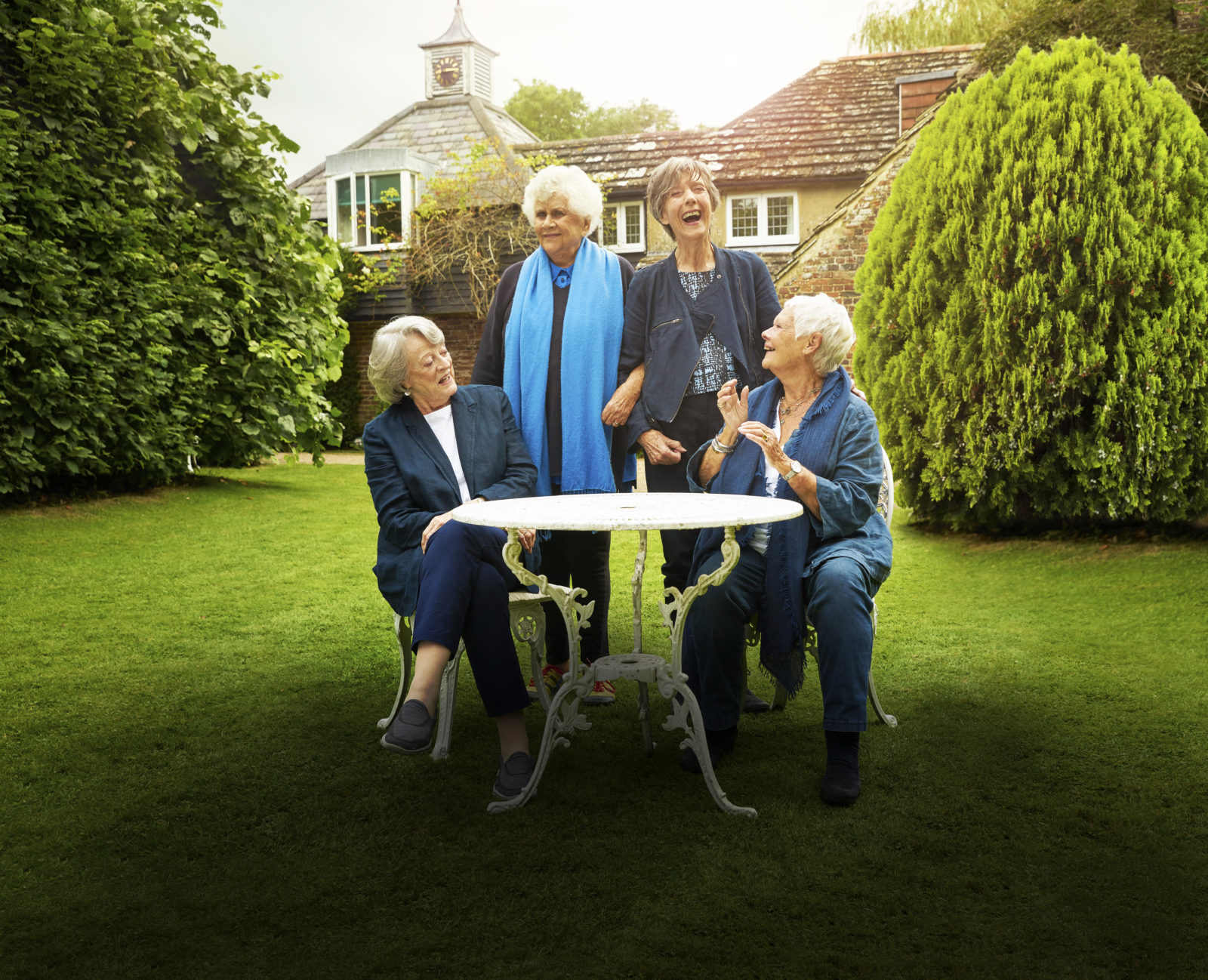 When given the opportunity to watch a documentary featuring four, award-winning actresses from the U.K. who’ve taken Hollywood by storm for decades, I jumped.

Especially when the four actresses are, Dames Judi Dench (As Time Goes By) Maggie Smith (Downton Abbey), Eileen Atkins (The Crown, Upstairs, Downstairs) and, Joan Plowright (Laurence Olivier Presents, Enchanted April). Tea with the Dames — originally titled, Nothing Like a Dame — is like sitting in a parlor with a group of spunky grandmothers, who want to spill the tea, but can’t because children are in the room.

In this case, the children are a film crew. Directed by Roger Michell, who brought us the 1999 box office hit, Notting Hill starring Hugh Grant and Julia Roberts, “Tea With the Dames,” is 94 minutes of four, amazing actresses, who are also the best of friends. Every now and then, they get together at Joan Plowright’s countryside cottage in Sussex, that she shared with her legendary, movie star husband, the late Sir Laurence Olivier, have tea and gossip. The film is part documentary and behind the scenes, as it opens with the women enjoying a sunny day sitting outside the luxurious garden, talking as members of the crew lightly fuss over them. The outdoor scenery is beautiful and everything is fine until rainfall causes all to head inside to the parlor.

We get a brief tour of Plowright’s cottage, and, despite being blind — Plowright retired from acting in 2014 due to losing her sight — the star of stage and the big screen for 60 years, can still handle her own. Back to the parlor, where the remainder of the film is set, viewers get to listen in on various conversations, most include snickering, gasps and, an ‘inside joke’ chuckle between the dames. Throughout the film, vintage clips of each actress, from childhood photos, home movies, media interviews, and, scenes from their early live theater performances. All speak of having worked with Olivier at some point, as well as other male co-stars. The dames have also worked side by side; with the exception of Atkins, Dench, Plowright and Smith who last appeared onscreen in the film, Tea with Mussolini. 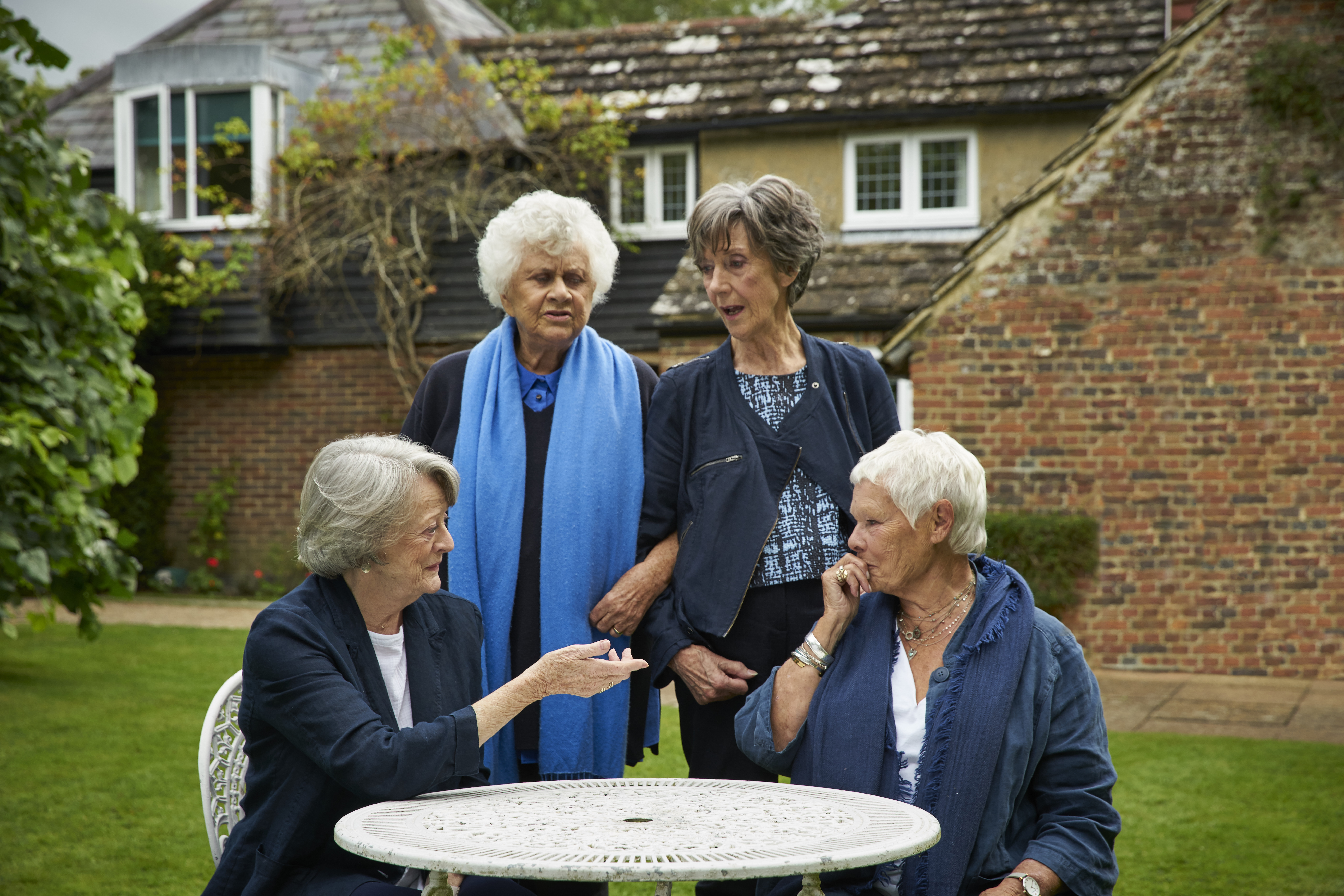 One thing I did not know regarding Atkins, is, that she co-created the classic TV series, Upstairs, Downstairs, which aired from 1971-1975. It is one of my favorite shows that I watched in syndication on public broadcasting. I became a fan of Judi Dench thanks to her comedy series, As Time Goes By, before seeing her as, M, in the James Bond films, including Spectre, and, Skyfall. Watching Tea with the Dames, I sometimes felt shorted as they barely drank tea and did not have cookies, scones or tea cakes; but that was probably too American for them. They all seemed like they wanted to get the filming over with, so the crew can leave (there’s a moment when Plowright inquires if filming was still happening, and she, sighs in disappointment when the others say, yes). Things did get spicy for a moment when Roger brings up ageism and Dench drops the F-bomb a couple of times towards him. Of course, I loved it. Then, a crew member opens a bottle of champagne, which Atkins said that should’ve been opened earlier, and I agree.

Witnessing these dames empty a bottle of champagne, then talking about the good old days, would’ve livened the film up a few notches.

Tea with the Dames is an enjoyably lighthearted trip down memory lane between longtime friends, who give you enough sips of their lives to quench your thirst. But if you want full cups, then I have no doubt, contains enough spice and a few kicks to give you a good laugh, you’re better off getting an invite to Plowright’s cottage one weekend.

Without the children and their bothersome recording devices.

Tea with the Dames opens in theaters September 21.

Escape For While Into the Criminal Mastermind that is ‘Artemis Fowl’

The Cast of ‘Cats’ Share Their Favorite Memories on Set