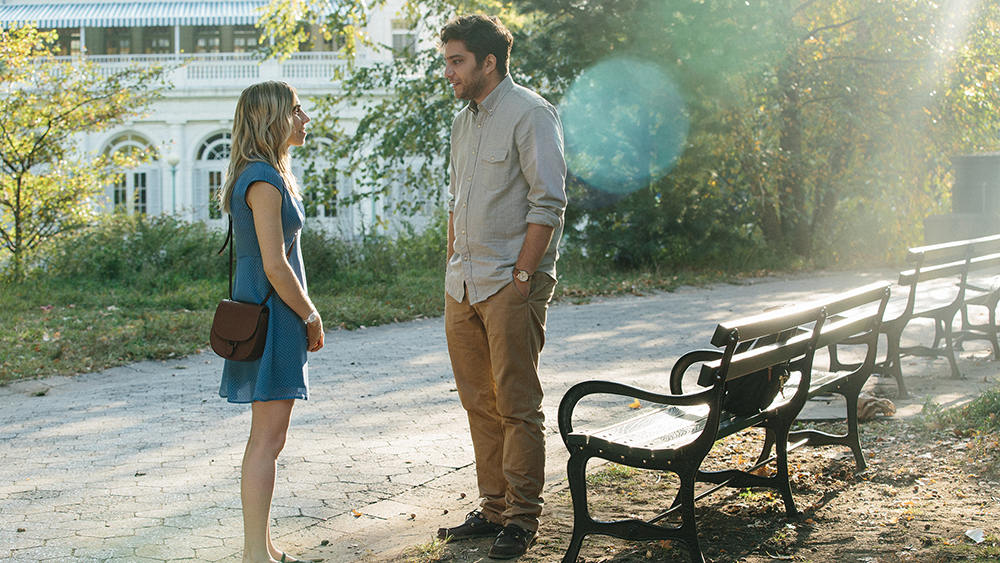 The Boy Downstairs begins like a straight up stalkaratzi flick. Diana (played by Zosia Mamet) moves into a building and finds that her ex-boyfriend is in the apartment downstairs. She tries to live her life, but is drawn back to him time and time again. She isn’t charming or outgoing, so her stalking behavior ends up as awkward as her attempt at small talk. At one point, Diana even pretends to sweep leaves with a broom, so she can look into his bedroom window! However, director Sophie Brooks is not setting up her debut film up to perpetuate the “crazy ex” stereotype, communicated by how she tinkers with time to weave the story of how Diana got so strung out on Ben (played by Matthew Shear), without realizing she even loved him at all.

The story improves when Brooks gets her hands dirty dropping flashbacks of the awkward romance between Ben and Diana, inserting shots of present-day Diana pining after her ex, who has another girlfriend—Parenthood’s Sarah Ramos. In the flashbacks, the two seem to have fun together, and Ben really loves Diana, but it’s questionable whether she feels the same way. She is kissing him one minute and over-analyzing something he said the next. This awkward indecision is characteristic of Diana, and ends up being the reason she dumps Ben before moving away to London for work. The manner of the break-up is abrupt, as Diana is not skilled at doing much of anything with finesse.

The act shatters Ben, of course, but in a typical “you never know what you had until it’s gone” spin, we come crashing back to the present—with Diana stalking Ben. At this point, the question becomes: does she really love him, or does she want to possess him? Brooks works through the story furtther to reach a conclusion that seems little too tidy, but still serves its purpose. In the end, The Boy Downstairs is a complex romance film that looks at just how much harm we can conduct by standing in our own way.

The film has a great story, but Brooks takes her sweet time getting there. It’s hard to get into it, as there’s not much to hook any interest until Mamet takes her seemingly organized and stiff-at-first character into a realm of discomfort that makes it hard not to scream, “girl just stop putting yourself through this!” at the screen. The real magic begins when the flashbacks to the real story kick off, fleshing out the compulsive stalking takeover. The flashbacks are seamlessly weaved into the present-day, making the transitions interesting to follow (the hairstyle changes are a big help). No time or time-jump is wasted. Each one is connected to explaining Diana and her sudden love/obsession with her ex.

The film is graced with the acting talents of Deirdre O’Connell (Secondhand Lions, Eternal Sunshine of the Spotless Mind) as Diana’s mom who, along with the rest of the cast, help rescue the film from the sometimes whiney Girls-like tone that Mamet slips into from time to time. They remind us that Lena Dunham is not lounging around the corner ready to spin the entire film into a rambling, whining mess.

The Boy Downstairs expertly veers away from the hurtful break-up tropes and ex-girlfriend stereotypes to bring a story that could have happened to any introverted, unsure kid falling in love the very first time. Brooks posits Diana as both a girl pining for her ex, while also being well-supported and strong enough to carry on her life, despite the momentary weaknesses that have her doing things like delivering mail to Ben’s apartment after a night out drinking with friends. Brooks refreshingly paints a world where the girl doesn’t need the guy to survive. A girl merely wants him in her life. The difference may seem insignificant, but in today’s post-#MeToo world, the message sent is a very important one.