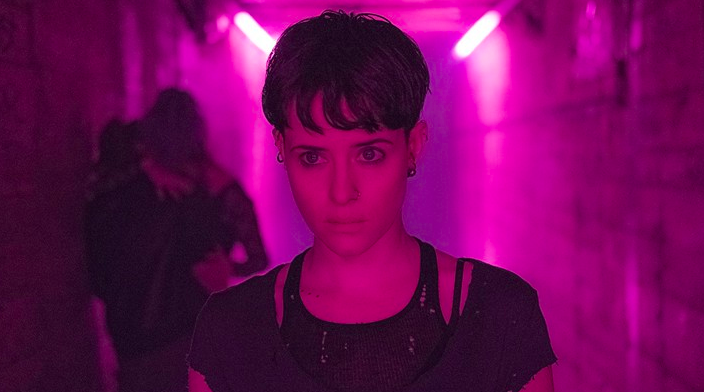 The Girl in the Spider’s Web opens in flashback with a young Lisbeth Salander (Beau Gadson) and her fraternal twin Camilla (Carlotta Von Falkenhayn) being held by their father, Russian mobster Zalachenko (Mikael Persbrandt), in a creepy hilltop mansion outside Stockholm. The house is home to many unsavory people and events, including Zalachenko deciding to ramp up his relationships with his daughters into unspeakable territory. Being the compliant one, Camilla acquiesces to her father’s newly implied sexual demands. Lisbeth jumps from a second-floor window and runs off into the snow-covered woods, escaping and somehow surviving a Swedish winter day with no coat or shoes. This fourth installment is a complete departure from Stieg Larsson’s original trilogy and Swedish film adaptation, and this nonsensical narrative revision of Lisbeth’s history only sets the stage for more disappointing additions to her saga.

Jumping into present time 16 years later: Fresh after hurting another man who hurts women — and transferring his money to the women he abused — Lisbeth Salander’s (Claire Foy) hacker services have been acquired by Frans Balder (Stephen Merchant). Balder wants her to recover the FireFall computer program he designed that would allow accessing every single weapons defense system on the planet. Balder plans to destroy it. But before Salander can deliver it, masked agents attack her and blow up her apartment, absconding with her laptop and the FireFall program. Salander knows that she will be framed as the thief — she has been framed by the Swedish government and police before — so she needs to recover the program in order to pre-emptively clear her name.

With the help of her trusted contact Plague, beautifully played by Cameron Britton (an unrecognizable Edmund Kemper from Mindhunter), Salander’s search leads to a group of terrorists called The Spiders. As it turns out, Lisbeth’s sister Camilla (Sylvia Hoeks), earlier presumed dead, has taken over their Russian mobster father’s network and reconfigured it into a sadistic cadre of militants intent on blackmail and world domination. Lisbeth and Camilla meet again for the first time in almost two decades, in a lukewarm showdown that matches the general quality of The Girl in the Spider’s Web. 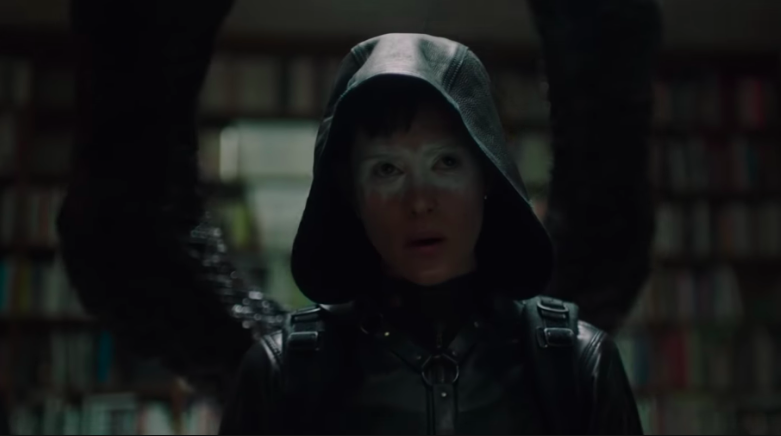 The depth of Claire Foy’s portrayal of Lisbeth Salander’s vulnerability — something that oozed in complex ways from both Noomi Rapace and Rooney Mara’s previous performances — is limited to watery eyes and a quivery chin. Even Foy’s displays of Lisbeth’s considerable strength are confined to the same furrowed brow and scowl, a far cry from Rapace and Mara’s nuanced and three-dimensional versions of this beloved character. There are also major problems with her physical presentation. Lisbeth’s musculature is gone. The wasp tattoo behind her left ear is 90s tribal tattoo garbage. And her iconic dragon tattoo is so generic it looks like it was pulled off the flash wall in a walk-in tattoo shop. Worse, Lisbeth’s armpits are shaved. Lisbeth’s character is predicated on the fact that she is a highly sexual being, but never a sex object. Even Rooney Mara’s Lisbeth in the Hollywood-ized version of Dragon Tattoo sported hairy pits. Shaving Lisbeth in Spider’s Web, and making a point of zooming in on her smooth underarms, is an insult to so much Lisbeth has come to represent.

But unfortunately, Foy isn’t the only miscast and misrepresented character in The Girl in the Spider’s Web. Journalist Mikael Blomqvist — played differently and beautifully by both Mikael Nyqvist and Daniel Craig — in this iteration might as well be a flower on wallpaper. Sverir Gudnason’s version is flat, boring, and has zero chemistry with other characters on screen, including his two love interests Millennium Magazine publisher/editor Erika Berger (Vicky Krieps) and Lisbeth. This poor casting choice wasn’t the only problem in this threesome. Erika has always been in polyamorous relationships along with her husband, and sometimes they have included Mikael. At one point in Spider’s Web Erika gets openly jealous and possessive about Mikael’s relationship with Lisbeth, which is among so many other things that don’t make sense in this film. Also jarring is that Mikael and Erika are suddenly Lisbeth’s age, when they have always been 20 and 25 years older than her — facts key to previous plots.

Lakeith Stanfield as Ed Needham, a former hacker and now NSA special ops agent, realizes that someone is trying to steal the dangerous FireFall software. He shuts down the NSA’s power grid, but not in time to prevent the theft. He then goes on a one-man mission to Stockholm to recover the software from Salander. The most deadly computer program ever that gives its owner access to all organized weaponry on Earth has been stolen, and the NSA only sends one dude to take care of it? There isn’t even a team of people on the other side to help him? At first, I wondered if he was trying to cover up the theft. But he shut down the entire power grid of the building. Everyone witnessed it. This is one of so many enormous plot holes that nobody bothered to fill, let alone even make an excuse for.

The only character who shines with his own spotlight was Cameron Britton as Plague. His thoughtful performance embodied the character from the original Swedish films so perfectly I actually thought he was Thomas Köhler. Britton was absolutely the highlight of the film. I’d watch a whole series about his Plague.

Ultimately, The Girl in the Spider’s Web couldn’t decide on what it should be. Is it a Bond-esque spy thriller with a female lead, devoid of emotion, empathy, and compassion with a means only to fulfill a certain goal for money or honor? Or a family drama about horrific histories of violence and how this dynamic will eventually implode and explode? The plots ran concurrently, and there was no emotional buildup. It could have been both storylines simultaneously, had the writing been better. Maybe by someone who actually bothered to understand the complexities of Lisbeth Salander and her family history of violence.

Even sadder, Camilla Salander — with her all-red outfits and preternatural blonde looks — had the potential to be a Hannibal Lecter-level villain, a white devil we could almost root for, especially after we hear what her father did to her in the 16 years she and Lisbeth were apart. But the filmmakers harnessed none of this power, nor the subsequent dynamic of an anti-hero and her vigilante sister forced to confront not just the current crimes on hand, but those of the past as well. 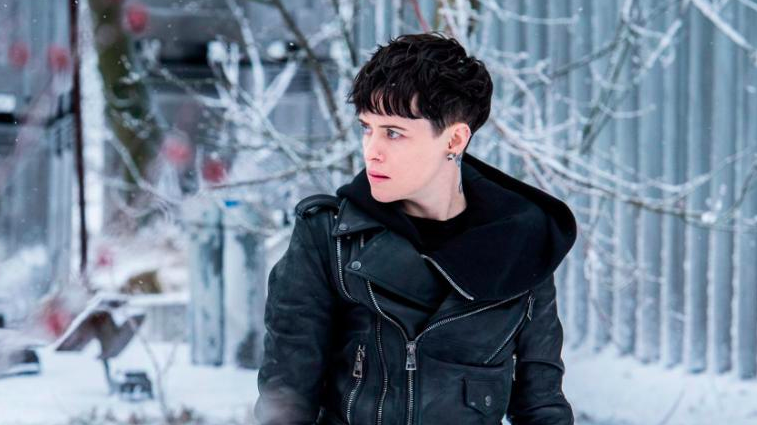 “You’re the girl who hurts men who hurt women,” Camilla says to Lisbeth. “Why did you help everyone but me?” Lisbeth has no good answer other than blaming her sister for joining her sadistic father. “You chose him,” Lisbeth says. Which is one of the biggest mistakes this film makes regarding her character. If this situation had played out as they propose, Camilla would have been the first person Lisbeth rescued once she realized what she would do with her life. But they’ve rewritten the end of the trilogy from The Girl Who Kicked the Hornet’s Nest, concocting an alternate reality that makes no sense here in the context of an already well-established narrative.

I appreciate the idea that the past never leaves us. And that we often need to return to the original sites of trauma in order to destroy them — or allow them to destroy us once and for all. But it would be reaching to claim this as a major theme in Spider’s Web when the writing is so uneven. And the fact that two of the most complicated women to ever hit a screen at the same time were pitted against each other so superficially is a huge lost opportunity in exploring these complex inter-sororal dynamics.

The cinematography in Spider’s Web is solid and some of the visual motifs and tableaus utilized by Fede Alvarez are evocative, like placing Lisbeth in front of objects that make her look as if she has dragon wings. But these fleeting artistic moments are not enough to save this film from what it, unfortunately, ended up being: a vacuous action movie that could not rest on Lisbeth’s past laurels as a character. The only sparks in this film are from its many, and unnecessary explosions.

Well, at least there was no gratuitous nudity.

The Girl in the Spider’s Web is currently playing in theaters.