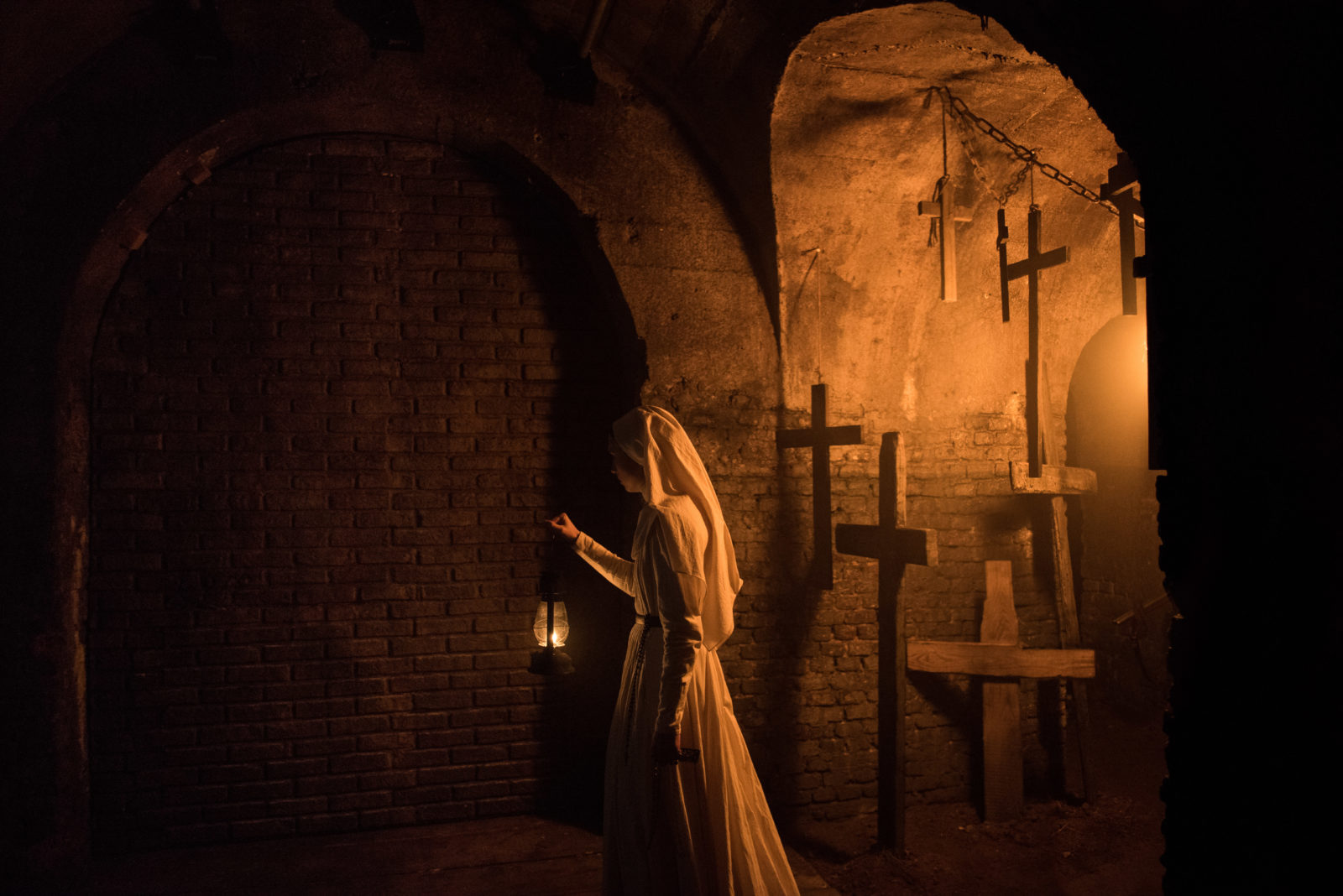 You will never look at a Nun the same way again after you experience New Line Cinema’s latest horror spin-off from The Conjuring series — The Nun. Directed by Corin Hardy (The Hallow) and produced by James Wan and Peter Safran, this film connects the dots to both Conjuring films seamlessly as it answers questions to the mysterious nun we saw in Conjuring 2.

The film begins with Sister Victoria (Charlotte Hope), a young nun living in Romania who hangs herself. This suicide results in an investigation led by Father Burke (Demian Bichir), a clergyman from Philadelphia and Sister Irene (Taissa Farmiga), a young novitiate who has not yet completed her vows. Both are sent by the Vatican to examine what happened to Sister Victoria. They meet a young French-Canadian villager who calls himself “Frenchie” (Jonas Bloquet). Frenchie discovered the lifeless body of Sister Victoria suspended by a noose several days after her death.

He’s asked by Father Burke and Sister Irene to assist in their investigation and reluctantly agrees after finally being persuaded by Sister Irene whom he has an affinity for. Things slowly begin to spiral out of control when the hallways of the Abbey of St. Carta are haunted by demon nuns. Father Burke is also forced to deal with his past as a man struggling with his faith. The demon hunter finds that he’s fighting more than just one haunting but several. 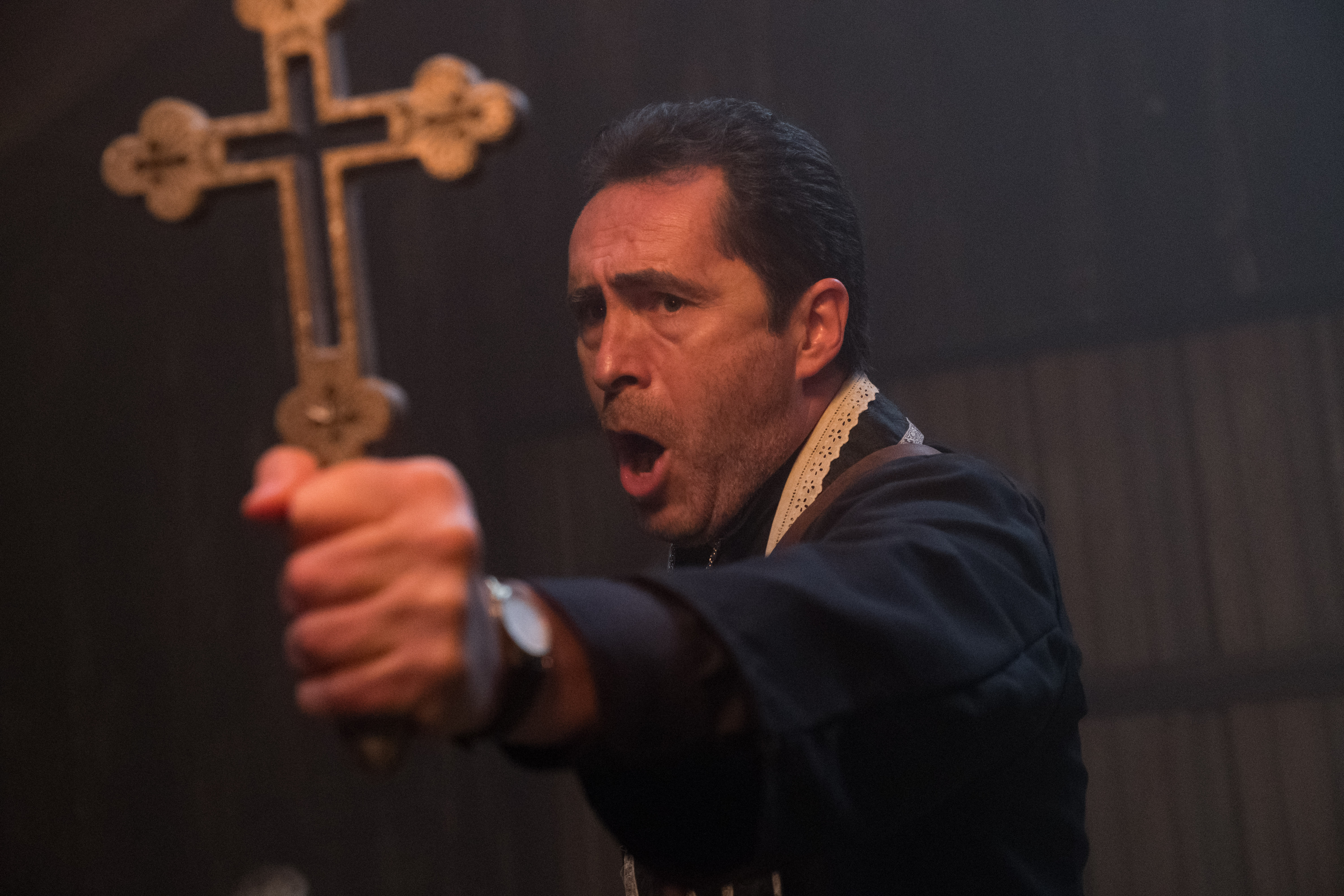 The film takes us through this pretty terrifying journey as we meander through dark hallways and secret pathways to see what Father Burke and Sister Irene are seeking — answers to the tragedy that has taken place.

The bravado of these two characters was pretty remarkable. While knowing there was so much evil and supernatural activity taking place they are both diligent and determined to make sure the evil is self-contained and the holy ground remains holy. The only character I could empathize with was Frenchie — who although was pretty valiant in his own right — believed that disturbing this place was a bad idea.

The chemistry between actors Taissa Farmiga and Demian Bichir is superb and the two mesh really well together. You immediately feel compassion for these strangers because they’re likable characters. There are moments in the film where the story begins to lag and others where it seems that with so many jump-scares and frightening moments these two would have the common sense to get the hell out of there. How these two were able to hang on to their wits is beyond me.

There’s even a scene where a character is buried alive and there’s an entity in the coffin with them.

Does this stop them from fighting the good fight of faith and demonic activity?  Of course not!  However, both you and I at that point would have to respectfully bow out of the investigation.

The Demon Nun (Bonnie Aarons) is so terrifying her image is indelibly printed on my brain! And might I add, watching that opening shot from the movie trailer isn’t helping!  The production team of this motion picture raises the bar with using makeup and horrifying contact lenses to make this nun look so scary that sometimes you have to look away when she appears in a scene! 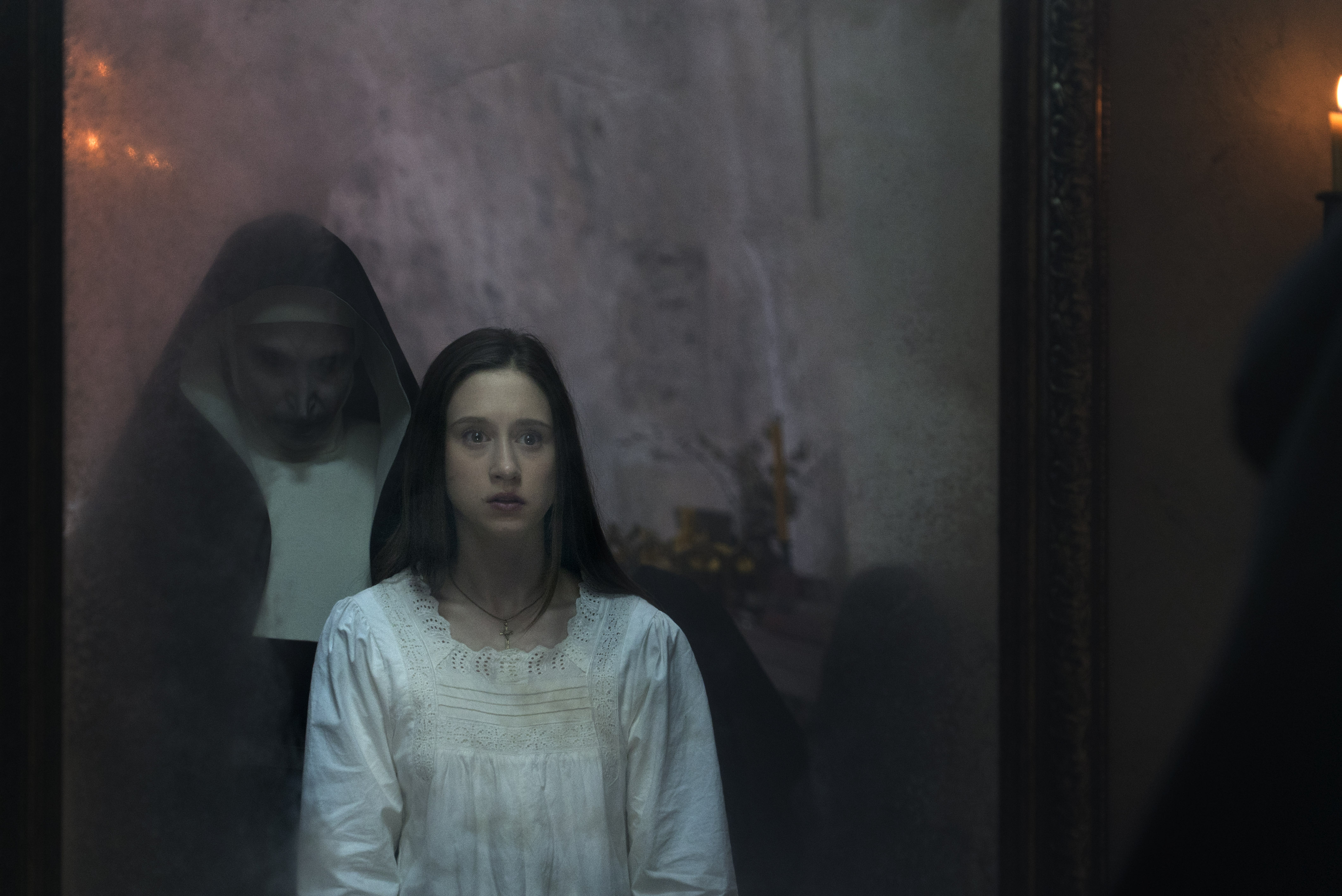 The most compelling and smart thing that The Nun does for audiences is it does not perform as a standalone film.  The film beautifully stitches together both the first and second Conjuring movies and adds even more context and backstory to the demon-possessed nun. You could tell that this was a collaborative process between filmmaker Corin Hardy and producers James Wan and Peter Safran.

The special effects were stunning and impressive. There’s an intense scene that takes place underwater and I like that the film sticks with as many practical effects as possible to keep it super intense and real.  The story of The Nun takes cues from the drama mystery film The Name of the Rose starring Sean Connery and a young Christian Slater. The Name of the Rose was about a friar and his apprentice who investigates a murder in an abbey. In an interview with Corin Hardy, he says, “there was some influences and inspirations [from that movie] that James and Gary were writing in the story, it’s a riff off that and was taken in a supernatural direction”.

The movie was also filmed entirely in Romania along with locations in Bucharest and Transylvania. The setting had an authentic look filming in two 14th century castles and an abandoned medieval fort.

The Nun does play out like a murder mystery as Sister Irene is trying to uncover the truth about a mysterious key that Sister Victoria had in her possession when she died. Sister Irene receives some assistance from Sister Oana (Ingrid Bisu) who breaks the rule of silence; risks punishment among her sisters and warns Sister Irene about the evil spirit inhabiting the abbey.

The Nun has exactly the kind of gothic flavor you are looking for in a contemporary horror film. If you like terror, violence, and disturbing bloody images then this film will most certainly whet your appetite.