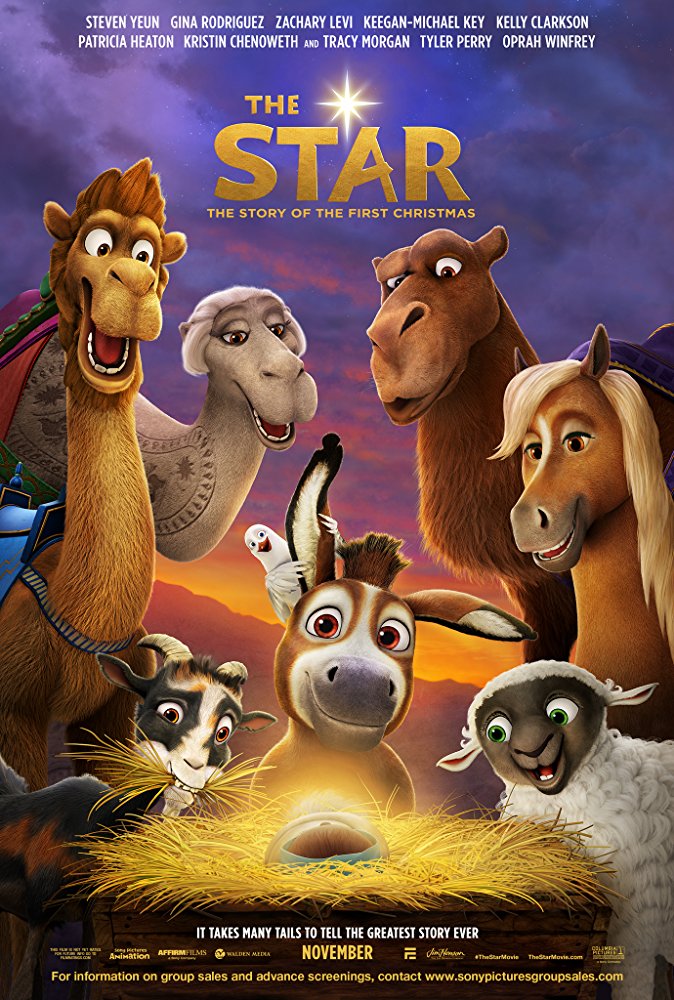 I was genuinely surprised when the first five minutes of The Star featured an intimidating, glowing presence informing our virginal unwed heroine (Gina Rodriguez, definitely-not-typecast) that she was soon to be pregnant with the messiah. Aside from the scene itself, which gives the audience zero prompting—side-note, the Angel Gabriel is the color of Cool Blue Gatorade—a part of me expected some aspect of delicacy in revealing the religious crux of the story. This is not a demerit to the film in any way, mind you, just my expectation, which encounters a lot of “secret” religious tonality or purpose in popular works. In the end, The Star is a movie about Jesus Christ being born and is absolutely upfront in communicating that the holy conception was sudden and scary, kids.

This brusque intro seems a bit harsh for befreckled, blue-eyed nurturer Mary, who freely shares her daily bread with a feisty field-mouse-cum-proselytizer (Kristin Chenoweth, manic and charismatic, surprisingly not singing). But Mary takes on this sacred purpose, keeping it a secret from her betrothed carpenter Joseph (Zachary Levi) even into their wedding day. All these details, I’ve come to find out, are actually fairly consistent with New Testament passages (previously unbeknownst to me), and I have to admit that weaving in content that adheres to a holy text and trying to spin it with humor or sass is admirably creative. Being a modern film, yet one aimed at young children, The Star lightly tussles with Joseph’s distrust of the conception, but instead of intending to divorce Mary in secret, he simply refuses to sleep beside her, which was affectingly cold to watch; I’m sure children of arguing parents will respond knowingly to the scene.

These aspirations for the script are some of the most interesting and worthy details I noticed in The Star, and screenwriting newcomer Carlos Kotkin includes other rarely-shared Bible tidbits, like the reason for Joseph and Mary’s travel to Bethlehem being a response to a public census. Bureaucracy brought us the babe in Bethlehem, it’s true. But don’t go thinking this is Passion of The Christ for prepubescents; it all resolves into a star-studded talking-animal slapstick cartoon with butt jokes.

My screening included a good assortment of young viewers—who I did my best to observe with all the note-taking, polite scrutiny of Sir David Attenborough—and while they judiciously applauded at the credits, I didn’t notice a tremendous response from them throughout the film’s run-time. The big jokes were the butt jokes, with a scene where the main character flattens his best friend and loses him on his posterior being the money-shot zinger.

Speaking of Bo (Steven Yeun), he’s originally a nameless mill donkey who toils under daily hard labor in chains. Dreaming of escaping his imprisoned peasantry and joining the royal caravan with his best friend Dave (Keegan-Michael Key, cloyingly cheerful), he escapes the 9-5 and eventually crosses paths with Mary and Joseph. Bo outright rejecting his (admittedly unlikely) celebrity dreams for a pious purpose is a big part of the plot, as he eventually strives to help Mary and Joseph evade the king’s henchman, a brute hunting them down to quash the threat to rule the Christ-child represents.

The Star is all about the animals, though. Abby the field mouse begins telling other small creatures the story of the angel, whose evidence persists as a glowing object in the sky. Other animals may know nothing of holy virgins or messiahs, but they do know the stars, and many find themselves following the direction of this dazzling light with a dazed conviction. Although the elevator pitch for the film is “the Nativity as told from the perspective of the animals,” it’s more so a movie where the animals all know way more than the humans who power the drama, and struggle to advise them with barks and bleats.

The cast is bulging at the seams, with Oprah, Kelly Clarkson, Christopher Plummer, Tyler Perry, and a whole string of big-money celebs coming out of the woodwork. The bulk of the film centers on Bo and Dave, though it gingerly shifts to other spotlight-thieves like the three argumentative camels. There’s quite a few people of color rounding out the voice cast, and the film being primarily carried by Yeun and Key is worth mentioning, although most of the human characters seem physically white-ish at a glance. And let’s not split hairs: having a Mexican actor play a foolish, snarling dog is not really something I’m going to applaud, ever; maybe next time, make that Joel Osteen’s character (he’s in this too, as one of the magi…right).

For all the lofty, mall-ready Christmas covers on the soundtrack, nothing in the movie really sings (and neither, literally, do the characters, for which I was personally thankful). The character designs are mostly unmemorable, with Bo’s ears arguably the most inventive flourish; they often act as “hands” and are key to many of his desperate pantomimes. Characters certainly look like what they’re supposed to look like, but none of their likenesses remain sticky or charming in a penetrating way.

Functioning purely as a reprieve from standard Sunday-school storytelling, The Star is serviceable, and will surely be an effectively grateful distraction to the younguns. The children I watched it with seemed engaged enough in the animated hijinks, although the overall design aesthetic seemed to me more reminiscent of an unskippable Clash of Clans advertisement than the characterful top-shelf animated film its cast suggests. I didn’t really find much or any of The Star profound, although the religious story doesn’t resonate with me as it might with other audiences. As a faithful-family-targeted kid’s cartoon with a dependable crowd-pleasing soundtrack and a release date in throwing distance of Christmas, it’s very possible that holiday crowds will flock to it.

The Star is in US theaters now.