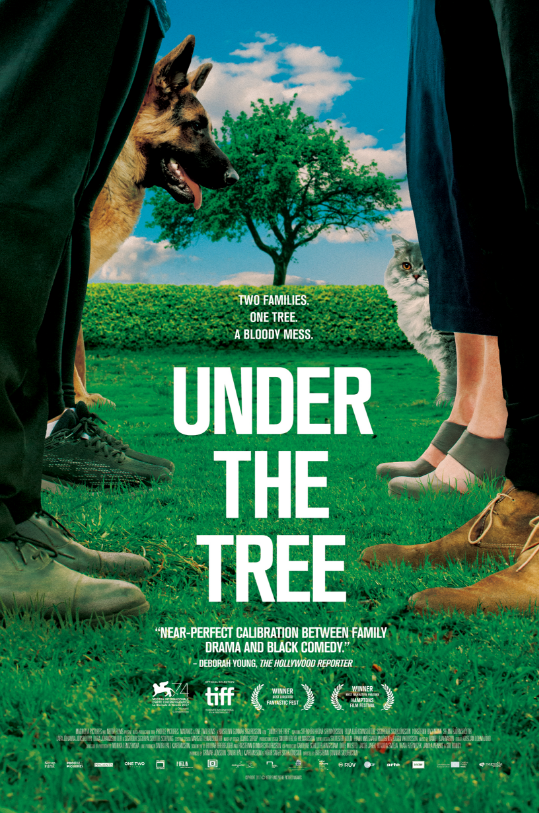 This weekend in theaters the Icelandic dark comedy Under The Tree is available for your viewing pleasure. If you’re a fan of comedies like Fargo and The War Of The Roses get ready to be blown away from this story about next-door neighbors living in the suburbs who’s spat over a tree violently spirals out of control.

Tensions rise when Atli drops unannounced at Asa’s elementary school to try to spend time with her shortly after he’s kicked out of the house.  This enrages Agnes, even more, blowing an opportunity for the two to reconcile.  Atli then returns to his parent’s home and we discover why Atli isn’t exactly the upstanding kind of guy he should be.  His father Baldvin (Sigurður Sigurjónsson) is a member of men’s choir, but we later find out he’s not as spiritual as presents himself to be.  And then there is his wife and Atli’s mother, Inga (Edda Björgvinsdóttir) who is truly a piece of work.  This chain-smoking foul-mouthed matriarch with an ornery attitude — is indignant about her next-door neighbors complaining about her tree which casts a shadow over their front yard. She vents about this to her husband Baldvin and he appears to be indifferent about the whole situation but sides with his wife about keeping the tree where it is.

Inga gets into a verbal altercation with Eybjorg (Selma Björnsdóttir) and insults her in front of her husband Konrad (Þorsteinn Bachmann). Inga boldly goes so far as to insinuate that he changed once he divorced his wife and left her for Eybjorg who is younger than his first wife.

The plot thickens once Inga’s beloved cat goes missing and now not only does she have a reason to go after her neighbors whom she despises, but she can exact the kind of revenge she’s been seeking by going after their beloved pet as well. The neighbors own a German Shepherd named Askur. The disagreement between these neighbors takes a downward turn in a direction where there’s no coming back.

Under The Tree sets you up on a ride that begins with light comedy and meanders to a horrifying twist that causes the wheels to fall off.  Actress Edda Björgvinsdóttir delivers a strong and compelling performance as the acrimonious mother who’s determined to one-up her neighbors any opportunity she gets and will do just about anything to get what she wants.

Under The Tree premieres July 6th in the theaters.