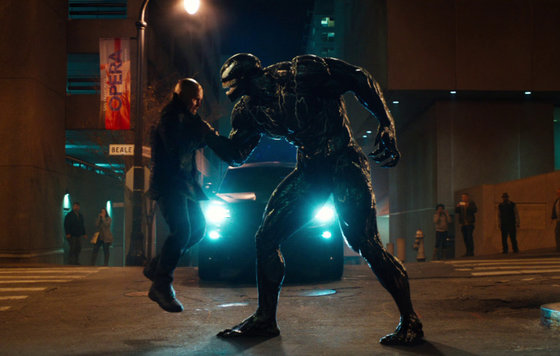 This addition to the Marvel Cinematic Universe is entertaining, but it still has a lot of problems. A story of a snarky alien symbiote who bonds with the human body of a loser reporter (who could use a little backbone) is supposed to be entertaining. It’s just not supposed to take half a film to get there. Additionally, the two star leads Tom Hardy as that loser reporter Eddy Brock and Michelle Williams as his lawyer girlfriend Anne Weying are wasted in this film due to a few issues including a meandering first act and poor character development. And those are just a few of the problems I had with this film.

But, again, I must reiterate that it is entertaining. Despite its issues, Venom did hold my attention until the end. You definitely won’t sleep through this one. However, Director Ruben Fleischer’s depiction of the Marvel antihero is a broken and sometimes confusing mesh until Venom’s second act begins. That’s when the audience gets its superhero film. It’s just a matter of “too little, too late.”

A Waste of a Good Tom Hardy

Yet again, audiences are faced with a misappropriation of acting talents possessed by the swarthy and studly Tom Hardy (see any review of his misuse Legends). The entire first half of the film, the story tries very hard to build his character Eddie up to be a great reporter. But, Hardy looks uncomfortable and ill-suited to this Clark-Kentian treatment. He works with the role, keeping the audience’s attention as he pretends to play a grumbling ace reporter. Meanwhile, the audience is trying to figure out just what is going on with an Eddie who looks more at home in a biker bar than holding a microphone to report on metro desk pieces.

It gets weird after Eddie loses his jobs and stumbles around trying to find himself. We are also lost on what to think of this guy, at first. Hardy handles it all well, though. The mumbling, fumbling, pity party is convincing enough to hold our attention. But only just enough to get to the good parts—the parts that he was chosen for—to play the host to the alien symbiote.

Venom hits its stride when Hardy and Venom are bonded. The fight for the body is hilarious at times and does dip into the sympathetic as we see this man losing more and more of himself to the “parasite”. In fact, Hardy’s explanation of the weird behaviors as, “I have a parasite,” actually stirred ripples of laughter in the theater. Even his mumbling vocals that fans had a problem with during The Dark Knight Rises and Bane seem to work here on a character struggling to rest his body from an alien. Of course, his voice will be grossly affected. Hardy and Venom’s back and forth are also entertaining as the snarky body snatcher scares the hell out of the man he is inhabiting. The fact that Venom sees Eddie as a stupid meat suit only adds another layer of humor. I am just not sure if that humor is intentional.

Where was this while they were putting Eddie’s backstory together though? Anne is equally ignored, leaving award-winning actress Michelle Williams to scramble like Hardy to pull the usable story out of a bad script. She too succeeds, which is also a credit to her talent as well. Like Hardy, Williams and her character seem mismatched (down to the bad blonde wig they placed her in) until Venom takes over their lives. Then, she gives Lois Lane a run for her money as a heroine who is anything but a damsel in distress. The point when Anne takes in Venom is a scene that she worked very well. Until that point, however, her character and the storyline she inhabits is undeveloped and seems a bit “thrown together.”

Other Issues—Do We Always have to Abuse the Stereotypes

I was disappointed to see that the film leaned on some stereotypes that could be dangerous in today’s political climate. At one point, a symbiote inhabited elderly Asian woman preys upon a “prim and proper” little blonde girl inside a public bathroom. Yes, the “crazed foreigner” preying upon a “wholesome White child” is part of the road Riot travels to his ultimate host. It’s also a centuries-old trope that still fuels White America’s fear of immigrants, POCs, and Black people.

That ultimate host is the villain Carlton Drake—a brown-skinned megalomaniac played by Riz Ahmed, who would fit in nicely at Armitage garden party in Get Out. As a post-surgical guest, of course. His progressive politics run so far left that Drake values the symbiote and his project over the poor people he claims to be helping. He is a very curious play on the character, but in Drake’s backstory, we see that the writers leaned on the “genius Indian kid with Tiger mom-like upbringing.” It seems that when people of color appear in Venom, they are connected to the story by a stereotypical trait. Surely the MCU knows that is not the only way to relate to an audience these days? 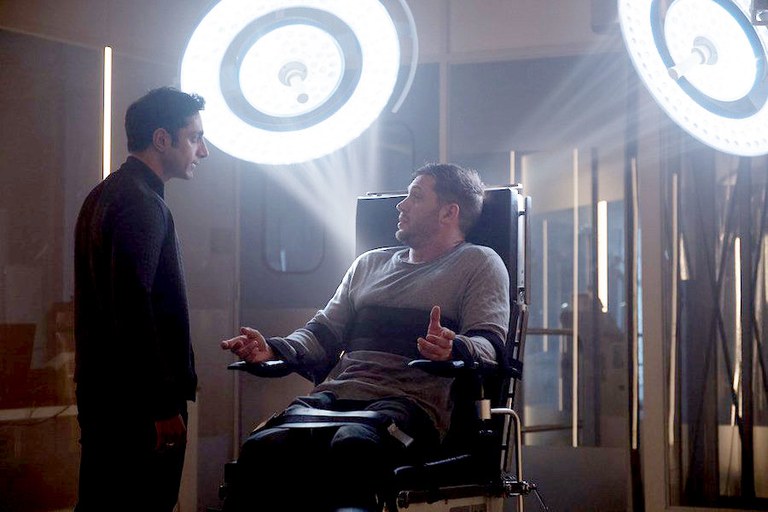 I must say that I expected a lot of very bad CGI but got the opposite. Despite a few glimpses of obvious cartoonish work, Venom looked amazing in all the action scenes. Hardy’s disbelief and surprise at the use of his body only added to the entertainment in these scenes. When he really got used to the voices, the snark, and the symbiote’s taste for human heads, the antihero Venom really came to the surface.

The fight scenes were also intriguing, as was the humor that came out through the banter between Venom and Eddie. By the end of the film, the two characters are as good a fit together as the actor and the role.

Maybe Venom could be one of the first films that’s better in the sequel than many others before it. The MCU will have to tighten up that script work first.

Stay for not one, but two reveals in the credits. And don’t hold your breath for a Tom Holland cameo in the film.

Review: ‘Venom: Let There Be Carnage’ Is a Wonderfully Twisted Love Story