Get ready for the next addition to the Marvel Cinema Universe–Captain Marvel. Here are some things we loved to see in the trailer and other things we got questions about.

At the beginning of the trailer, it looks as though Captain Marvel, played by Brie Larsen, is alien. She is unaware of her past and not of this Earth. That had me side-eyeing the MCU for a moment. Then, the flashes of her past rolled up and made things right. It seems like the Kree alien fusion with her DNA caused amnesia. That’s a fine premise. I just hope the movie stays clear of the soap opera schtick.

Furthermore, I hope they stay away from long walks into the backstory. The Avengers franchise thus far has proven that audiences don’t need much of the origin story in order to enjoy the films. The fans already know it and the newcomers don’t have time for it. They add enough to explain the essentials and move on from there. I hope Captain Marvel continues that trend.

The man who gave Carol Danvers her powers in the comics is going to be in the film and played by Jude Law. Now, it looks like they are altering how Danvers got the powers to become Captain Marvel. I am not sure but it looks like she touches the ground after a fall to get them. I am not too sure about this.

Furthermore, Mar-Vell was a prominent target character in the comics. He debuted in 1968 and was featured well into the 2000s. He is known as Captain Marvel and Danvers as Ms. Marvel. So, does that Danvers’ scored a movie first, so we won’t see a Captain Mar-vell movie?

(I personally hope they don’t go there. Mar-vell was not the most interesting character. The MCU has better alien heroes.)

Looks like the MCU is keeping the military vet background. I am not surprised. People loved Capt. America so much because of his military vet status and all the patriotic ‘Merica-ness about him. The thing is, Ms. Marvel has never really been that much of a patriot type of character. By keeping the military background, she will have one thing for more conservative readers to attach to. I just hope they understand that our Carol Danvers ain’t no Barbara Bush or Sarah Palin. She’s more of an Alex Osario Cortez with some Jessica Jones snark and badassness on top.

Is the Door Open for Kamala Khan’s Ms. Marvel? 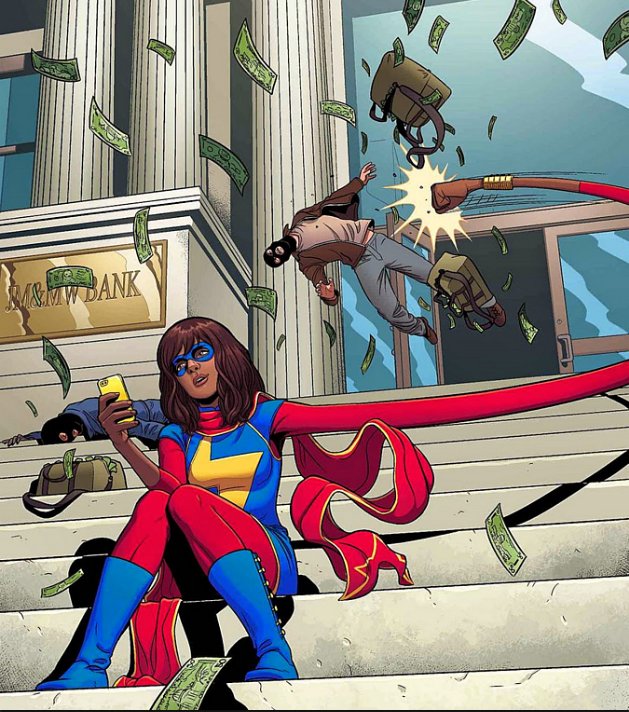 The teen heir to the Kree powers, Kamala Khan was dubbed Ms. Marvel when Carol Danvers was upgraded to Captain Marvel. So, does the MCU use of the Captain Marvel moniker for Carol Danvers? I enjoy the adventures of the Muslim teen who is trying to navigate love, her culture and also the newfound alien powers. It was a step forward in the inclusion of POCs in the Marvel comics as lead characters. It also helps spread the good work that the book has done in familiarizing the younger generations with a religion so many of their parents and grandparents are threatened by.

The trailer dropped this morning and has so much more in it. Take a look and then let us know what you want to see in the new Captain Marvel film, which premieres in 2019.

The Cast and Crew ‘Ms. Marvel’ Share Their Own Family Origin Stories