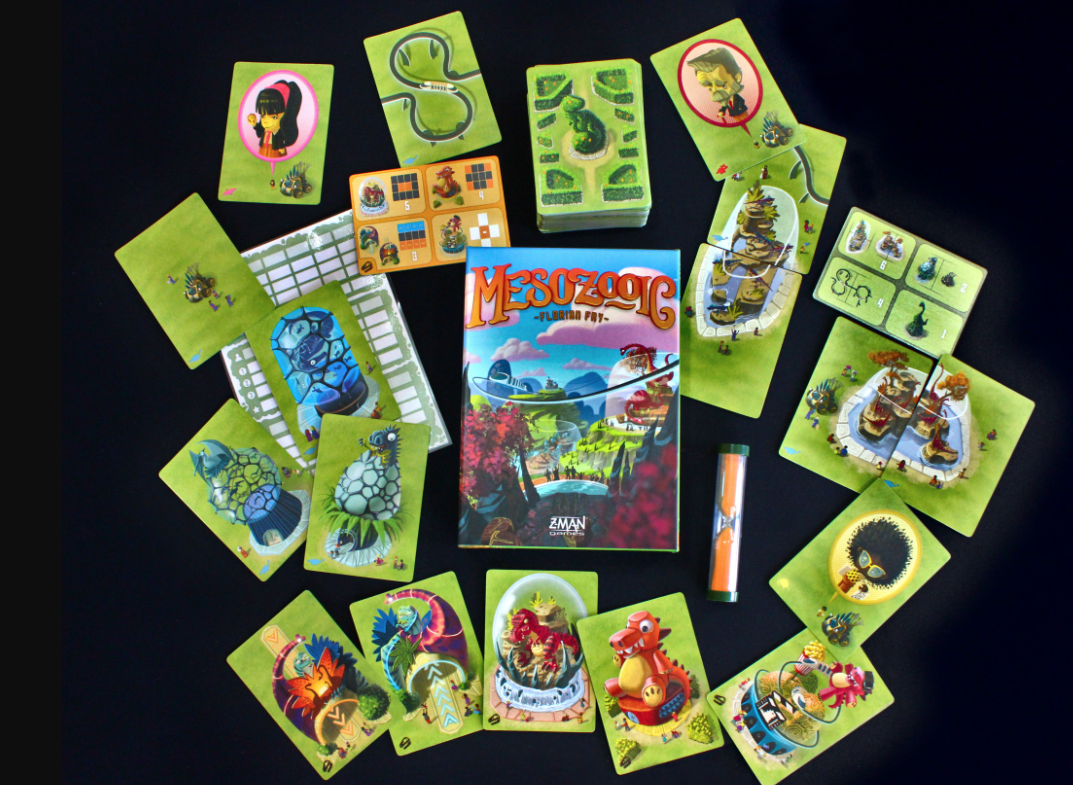 With family game time, there is always the challenge of finding a game that will bring the family together. Depending on the age of the youngest family member, the complexity of the game becomes an issue. Jenga is always a good one, but that can get boring, especially when you have teenagers who intentionally dump the tower and just to go back to scanning or swiping on their cell phone. Z-Man games provides a great option in their dinosaur-themed draft card game called Mesozooic.

The idea is to build the best dinosaur zoo that you can. You have three rounds to do that, and there is a 45 second timer. You get points for the ability to get certain cards in the same proximity. I can hear the meh already, but this is one game that will grab you. There are six color coded Director cards and six scoring Reference cards. Each player gets to select a Director card. For each Director, there are 11 Basic cards color-coded to the Director in the lower left corner. In addition, there are 12 Neutral cards and 20 Advanced cards.

The inclusion or omission of the Neutral and Advance cards support four ways to play. The first way is basically just using the color-coded Basic cards of the same color only. While the rules suggest doing this at the beginning as a familiarization round, it is also great for someone playing alone. Use one Director card and the 11 Basic cards of the same color. You mix the 11 Basic cards and arrange them in 4×3 matrix. Flip the timer, and you have 45 seconds to slide the different parts of zoo enclosures or zoo paths and other attractions into scoring combinations, always being mindful of the empty space. The empty space is where the Director card is going to go, and it can be a great point boost if you can get some attractions around it.

There is also a version better suited for younger kids. In this mode, each player uses their Director’s card and same colored Basic deck. To play, you start by placing the Director’s card aside and then choosing eight out of the 11 cards, placing the three remaining Basic cards aside. At the same time, each player arranges their Basic cards in an 3×3 array, leaving an empty space for their Director card. In this mode, you get a minute and half or two turns of the timer to arrange the best zoo. At the conclusion of the time, the Director card is placed in the empty slot and the array is scored using the combinations shown on the Reference card. In the three rounds, the lowest scored round is thrown out and the top two added together to determine the winner.

The basic way to play is for each player to select a Director’s Card. The Basic and Neutral cards are all mixed together. Each player is dealt 11 cards face down. A deck of 11 cards is drafted by each player selecting two cards and passing the rest to the next player. In the end, there will be one card left that is kept by each player, and that ends the draft. Each player shuffles their cards, leaving a space for the Director’s card, and then the timer is flipped. The Director’s card is placed in the empty slot and the array is scored consistent with the Reference card. In the advanced mode, the Neutral cards are omitted and the number of Advanced cards added in is dependent on the number of players. Also, the scoring goals shown on the back side of the Reference card are modified.

My gaming crew did play during lunch a few weeks ago, and interestingly enough the real challenge tended to be the timer, not your opponents. One common failing is not minding the timer when trying to make that one last arrangement. Inevitably, the timer catches you and all the great deck building intent goes right out the door.

While small in size, Mesozooic is big on fun. The setup is very easy, and one game can easily be completed during your lunch hour or several games can take up family game night. So if you’re looking for something easy and quick to play with your family or your gaming crew, Mesozooic may be found at your local gaming store or online from Z-Man or other online gaming site.