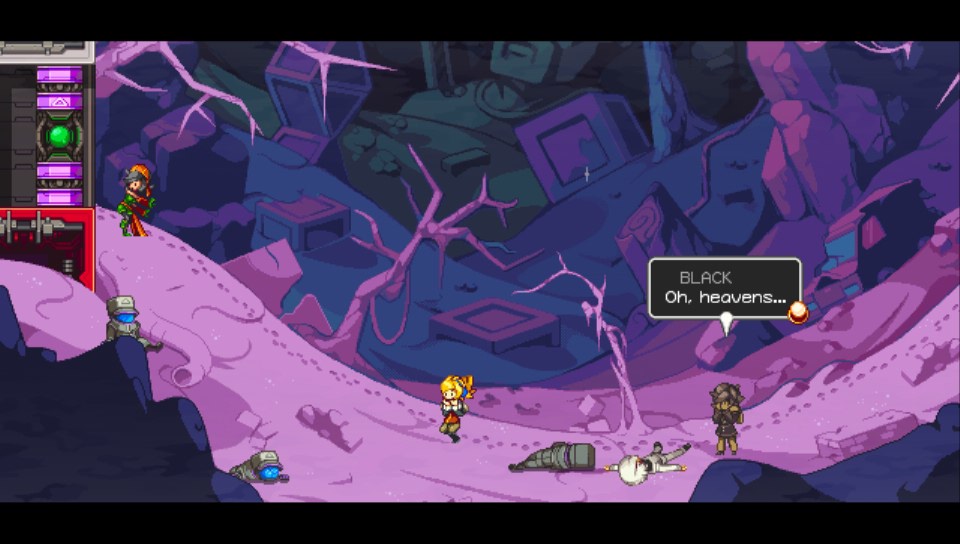 Eight years. I can’t fathom what that must be like for a lone indie developer plugging away on such a lavish artistic experience but, hey, that’s Konjak for you (a/ka/ Joakim Sandberg). It’s his fastidious approach to his work, a deliberating but driven grasp for perfection which has always singled out his projects, and also clearly informed the creation of Iconoclasts. In the earlier days of this wave of indies we’re living in—of whom he is absolutely an important part—Konjak became known for games like the jaw-droppingly elegant Legend of Princess and Noitu Love, character action platformers which were free to download, as well as Noitu Love’s highly-regarded sequel as well. All of these titles have an unusually recognizable refinement in their animation, their devoted pixel art, their control and mechanical “feel,” and the incredibly precise subtlety of character movement.

Which all musters the all-important question: is Iconoclasts the masterpiece we’ve been waiting for?

I’m having trouble manifesting clear-headed criticisms of this game. Like many others, I was really waiting for this. Not impatiently, mind you—after a few years of cooking in the pot, I was fully convinced that the chef was letting this simmer the exact amount of time it needed. But I could never help but be disappointed when I refreshed his homepage, noticing that there were no important updates or development notes on this game, sans its now-dusty (but exciting) demo.

Right out of the gate, Iconoclasts is beautiful, of course. Each individual character in its large roster has a litany of detailed animations that are all delightful and specific, whether it be Robin’s nervous, hands-to-her-cheeks fear (a frequently-used favorite), Agent Black’s frustrated diminutive shoulders vibrating with rage, or Mina’s flung-to-the-floor exasperated dismay. Every named character is brought to life with such a distinct and creative sense of personality, with animated emotions that support each carefully directed scene. This is not a story told with talking heads, but talking bodies.

While at first blush, Iconoclasts comes off as a kind of metroidvania, I think that interpretation is only skin-deep. Joakim himself has named Wonder Boy IV as an important inspiration, and it shows. There’s a level-based progression past the halfway point of the game, involving travel to new areas that do not effectively connect with the old. Personally, I don’t think I’m a fan of this structure, as I was slightly expecting something more in the vein of an open world, with new locales at my disposal once new weapons were obtained, as is the routine in these types of games.

Instead, Iconoclasts gives you a decent range of exploration, with specific puzzles that can only be completed once you’re fully kitted out. The good news: these puzzles are terrific, utilizing lateral thinking, timing, agility, and creative approaches to succeed. The bad news? Most of the rewards are effectively minimal, and come in the form of upgrade materials, which can be used to build a toolset referred to as “tweaks.”

These modules give you a very slight leg up in several areas, such as a tweak which gives you a free hit without taking damage, or very slightly increases your walking movement. I was really hoping and looking for a prominent gameplay change that would require a form of inventory management, carefully selecting the best tools for each job. But alas, tweaks are temporary (you can lose them when taking damage, though their benefits return after collecting bits off of fallen enemies and successful actions) and don’t significantly affect gameplay in any meaningful way. In my opinion, the tweaks are the absolute weakest part of Iconoclasts. Not a broken part, mind you, just functionally uninspired.

Konjak loves bosses. His design sensibilities are clearly drawn from character-action run’n’gun games of yore, like those developed by Treasure in the 90s, and his bosses are all unique, menacingly thoughtful creations with meaningful wrinkles to the norm. Take the midgame Incan-inspired boss Inti, which requires smart collaboration and character-switching to exploit specific mechanics, or Ash, who tasks you with tackling the encounter through stealth (a personal favorite). You never know quite what to expect when a screen transition and boss health bar appears, and stumbling into a new high-level fight is a joy, further helped by the quickload to the beginning of the fight after a loss, in most cases.

All that being said, I wish I could call Iconoclasts an unqualified success. I’m not sure that it is. Until approximately 50-60% of your way through the game, you’re given a constantly expanding world map in that recognizable metroidvania style. While you don’t necessarily obtain much in the way of new movement skills (I was surprised that a proper double-jump never manifests), you do add a few improvements and additions to your basic weaponry, which adjusts your access and opens up a few new methods of travel. At some point, you even unlock a kind of teleport function, although its effect on your travel is less than convenient—it sends you to only one specific drop point per large area.

Eventually, though, the game’s trajectory takes on that aforementioned encounter-to-encounter format. It doesn’t become a bad game during this time, at all, but a part of its essence unexpectedly transforms. With no additional items coming into play, either, it sets you off on a straight path through its story beats and an extended endgame. None of this wrecks the experience, but I was incredibly confused by it, and I think this kind of change warrants warning. Someone looking for a pure metroidvania experience (and I’m not even absolutely positive if I was, necessarily) will probably consider this a significant demerit.

(*Small note, potential spoiler*: there is a prison tower which you will explore, and it’s possibly one of my favorite portions of a platformer in the last few years. It’s the “Sen’s Fortress” of Iconoclasts.)

I’d say that there are two main attractions in Iconoclasts aside from its aesthetic treasures: the boss fights, and the story. The narrative is surprisingly ornate and dramatic, with deaths and other experiences of loss, a writhing plot about totalitarianism, media control, ecology, and religion, and enormous personalities exhibited by its diverse cast. If there’s one thing about Iconoclasts which is utterly confident, it would be its elaborate tale; an epic, really, involving fake gods, real gods, real gods which are fake, magic, technology, and war. It’s also frequently funny, and its humor and drama are further enhanced by the aforementioned animation, turning these pixels into incredibly gifted actors on your screen.

Konjak has always made women the focus of his games from the very beginning and, though Robin is a silent protagonist, she’s frequently emoting and commanding the story in visible ways, even making a few choices of her own. The star of the show, though, has to be Mina, a powder keg of frustrated responsibilities and Robin’s most important companion. There are even a few very specific guided moments where you get to temporarily swap characters with her; I’d muse that mechanical surprises like these are another important Konjak games trait.

Not only does Iconoclasts HANDILY pass the Bechdel Test, it also doesn’t shoehorn in a romance for the main protagonist. She’s a mechanic who defies fascists and the status quo, and her best friend is (*slight spoilers*) in a lesbian relationship (with someone else). That’s how you make a game that focuses on women characters.

I played this on “harder” difficulty, which I’m sure added significant challenge, taking me about 13 hours to complete the game in full. I did so because I trust Konjak and know his games and what they expect of me, and have even beaten Noitu Love 2 with all of its characters, constantly trying for higher completion scores. While I’m not sure that Iconoclasts has a comparable level of replayability (though there is a New Game+ mode, which I haven’t fully explored), it’s a story you’re absolutely going to want to see through to the end, at least once.

I don’t know if this is the Konjak game I wanted. I don’t know if this is the game Konjak always saw himself as making. While I don’t think it’s an unqualified success, it’s an unqualified recommendation. There is very little in the gaming landscape that has this level of artistic care, and there are plenty of surprises—the bosses and individual moments I mentioned above barely scratch the surface of what’s in store for you here. Iconoclasts is a big beautiful bear-hug of a game that is overflowing with emotion, humor, and intelligence.

A copy of Iconoclasts was provided by the developer for review on PS4/PS Vita. You can purchase the game for PC/Mac/Linux on Steam and on the Sony Playstation Store.