I had the honor of meeting MaryMartha Ford-Dieng, the sole creator of the game The Ultimate Clap Back at PAX East, 2018.  I loved the game and was even happier to learn that the first expansion pack to The Ultimate Clap Back was available to support through Kickstarter. I was happy to be one of those backers!  Per the Kickstarter website, “137 backers pledged $8,614 to help bring this project to life.” Not only did I get to contribute to the success of this expansion, but I also got the original game and one of the first copies!

Seeing the expansion brought me back to my original interaction with MaryMartha. When I approached The Ultimate Clap Back booth in the Indie Game area of PAX East, I was met by one of MaryMartha’s friends who were there helping her promote the game. The conversation went something like this:

“Do you know what a Clap Back is?”

“Yes you do, you probably call it something else, like a comeback.”

“Basically, if someone said to you, nice dress, I didn’t know they made things like that in your size” and then you reply, “Thanks…when does your husband get outta jail.”

The game looked cute and somewhat fun, but you really don’t get the full effect until you sit down to play.  If you want to win this game, you gotta let go of all that silly nice politeness.  If you are gonna Jones on me…..well, then “allow me to retort.” This sort of “playing the dozens,” or jokingly roasting your friends, is the kind of interaction I remember from my childhood.  I remember hearing people say, “you gotta get a thicker skin”.  I’ve since moved away from that mentality, but The Ultimate Clap Back brought THAT feeling back to me.  It comes as no surprise that this game has already earned both the Player’s Choice and the Rising Pixel Award. 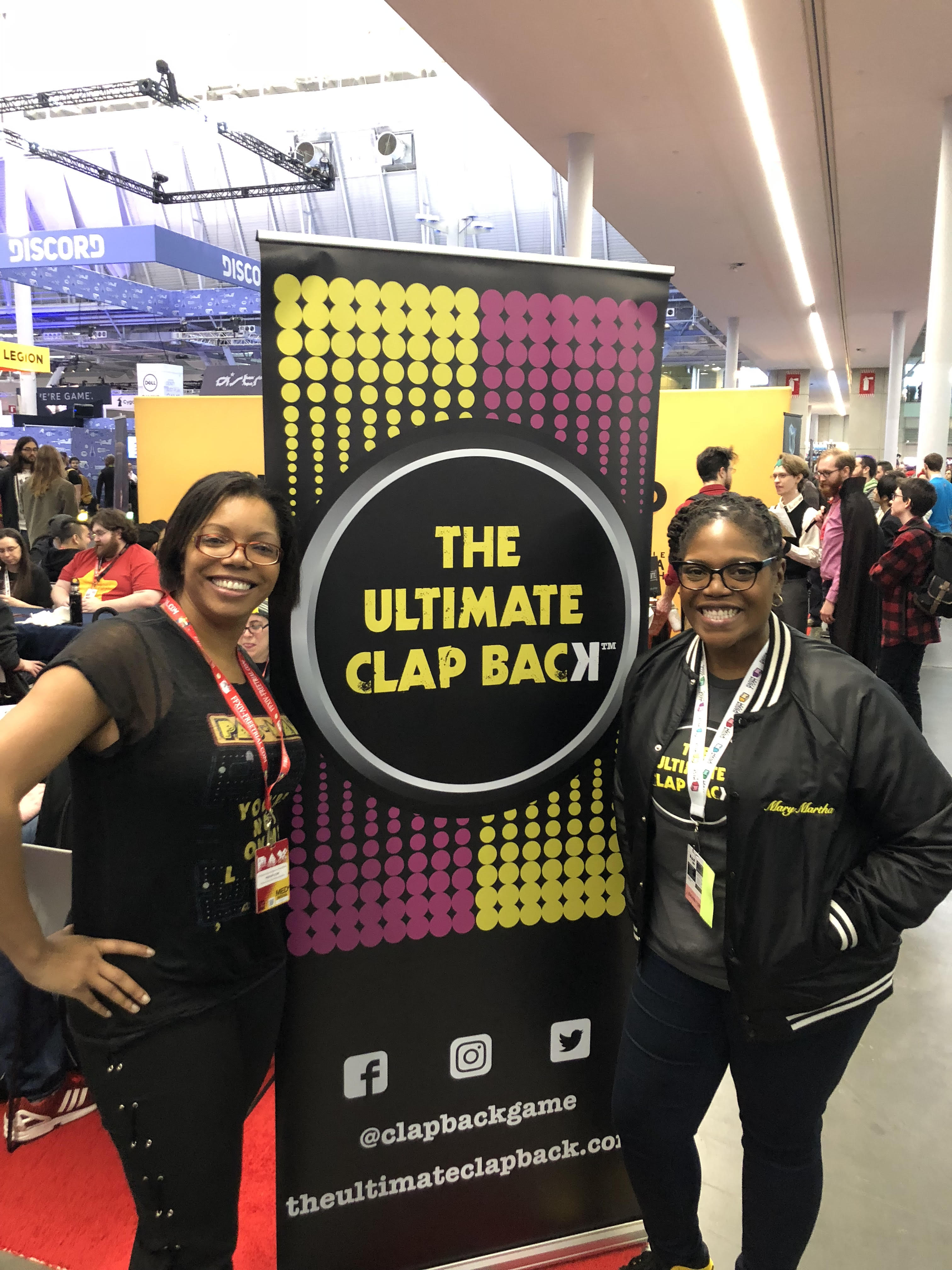 I am a Black woman in game development, so I was thrilled to meet with MaryMarthaand hear her story. The industry of game design and development is not proportionately representative of women of color, so I was excited to meet someone who might share a similar background as myself.  When I arrived at her booth and saw Mary Martha and two of her friends, I felt something.

Now there were four African American women standing together, talking about games, at PAX East! While I’ve met many amazing friends from diverse backgrounds, I can count on one hand the number of times where I was with this many other Black women. I had an interesting talk with MaryMartha, as other people played the game, during which time I learned that she actually had no background in game design and really used designing the game as a sort of cathartic therapy after making the tough decision to move her mother into a nursing home.

I, of course, had to buy the game. Not just because it was fun, or just because the nostalgia it invokes, but also because I’m voting with my dollars. I look forward to seeing MaryMartha develop more games and make an impact on diversifying the themes and contexts for tabletop games. Her existence in the industry has impacted me and others to start thinking, don’t wait for someone to give you an opportunity to make a game. Live your vision, become your dream! The fact that MaryMartha has already started on the expansion is a testament to her dedication to the game, the community, and the process. When the mobile version of The Ultimate Clap Back is available, I’ll be one of the first to download it!

You can purchase The Ultimate Clapback and find out more about the game here.

#BGNPAXEast: Return to The Abyss in ‘Underworld Ascendant’

PAX East Is Broadening Its Horizons